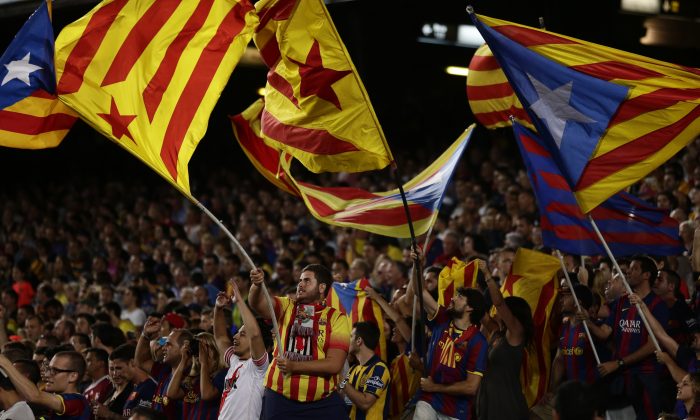 Independence is the question on everyone’s minds these days in Catalonia, as the wealthy northeastern region holds an election this weekend that may determine the fate of its separatist movement. And increasingly, the Barcelona football club’s stadium is the crucible for breakaway sentiment.

In Sunday’s regional election, pro-independence parties hope to win control of the regional parliament to carry out a single mandate: initiating an 18-month plan to create a new European state for the bilingual Mediterranean territory, possibly concluding in a unilateral declaration of independence. Polls show the independence parties headed for a slim win.

Even in less fraught times, FC Barcelona has always been known as “more than a club.” Today, as the talisman of separatist spirit, it finds itself at the heart of a burning political question. One of the team’s biggest luminaries, former coach and player Pep Guardiola, a living legend for most of Barcelona’s faithful, has been outspoken in his support of the independence push, which has gained force in recent years as Spain became immersed in a severe financial downturn.

Guardiola, who left Barcelona in 2012 and became manager of Germany’s Bayern Munich, has joined the pro-independence parties “Together for Yes” coalition as a symbolic candidate, though he is not up for a parliamentary seat.

“This is an opportunity that we have to make a new and more just country, starting from scratch,” Guardiola said in a pro-independence campaign video. “Nobody can stop the will of the people.”

Known familiarly as “Barca” (pronounced Barsa), the club has been seen as a bastion of Catalan identity dating back to the three decades of Gen. Francisco Franco’s dictatorship, when Catalans could not openly speak their native Catalan language.

The stadium is wrapped up with Catalan identity. Under Franco, it was illegal to shout “Long Live Catalonia!” in Spanish but fans could shout “Long Live Barca!” (¡Visca Barca!)” in Catalan. The chant became code for expressing Catalan pride — and now that role is being updated as a catalyst for the independence movement.

The roar in a home game’s 17th minute is a ritual for separatists. It is a pointed reminder of 1714, the year troops defending Barcelona during the War of Spanish Succession lost a siege — and the Catalonia region consequently lost much of the self-governing power it had for centuries.

Barcelona football club has shied away from openly secessionist gestures. But it has repeatedly supported what Catalans consider their unique cultural identity, as well as the campaign to hold a referendum on independence — a bid blocked by the central government in Madrid.

Following tradition, Barcelona, along with other Catalan sports clubs, sent a delegation to participate in the festivities during the Catalan National Day holiday on Sept. 11.

Even then, club vice president Carles Vilarrubi said that Barcelona “must not interfere” in the campaign for the critical regional elections, as the club tries to walk a fine line between supporting its local fans who see it as bastion of Catalan culture, and those other millions around the world who know it as simply one of the most attractive teams to play the sport.

Maria Rosa Pizjoan, a 63-year-old shopkeeper, said separatists like her “can’t take any more of the Spanish state” and are sick of Catalonia being “plundered” by Spain. That’s shorthand for the claim — denied by the Madrid government — that the highly industrialized region does not get back from Spain what it pays in taxes.

“I scream for independence in minute 17 because I am Barca,” said Pizjoan. She became a fan as a child during the dictatorship, when a customer at her family’s restaurant insulted both Catalans and their football team in the same tirade.

“What that man said stayed with me,” she said. “If Barca had been a normal club, no way would I have become a fan because at 7 or 8 I didn’t like football.”

Passionate allegiances aside, Barcelona football is also big business. And that means its role in the independence movement could end up putting the club’s culture in conflict with its finances.

Barca is the second-richest football club in the world behind rival Real Madrid, and Barcelona announced this month that it forecasts record income of 633 million euros ($704 million) for the 2015-16 season.

A crucial question: What happens to the football club if Catalonia breaks away from Spain?

Spanish government and European Union officials warn that Catalonia would be out of the European Union if it breaks away from Spain. So Barcelona, too, could be kicked out of the Spanish league. The region has only one other first division team in cross-town rival Espanyol, plus second division teams Girona, Nastic and Llagostera — meaning there’s no way a meaningful Catalonia league could be formed.

Artur Mas, Catalonia’s regional leader who has pushed the elections as a de facto independence vote, has tried to assure Barcelona’s fans that the team would remain in the Spanish league.

“I don’t think that the Spanish league would give up its biggest asset, which is Barca vs. Madrid,” Mas told Paneka magazine, referring to the club’s rivalry with Real Madrid. While Barca is a symbol of Catalan nationalism, Real Madrid is an emblem of a unified Spain. Separatists have for years displayed a banner saying “Catalonia is not Spain” in the stands during “clasico” matches with Real Madrid.

For the Spanish government, the exclusion of Catalan teams from Spanish competition if Catalonia secedes is just common sense.

“It’s natural. Sports have been organized in agreement with geographical criteria,” said Miguel Cardenal, the president of Spain’s Higher Sports Council, the government’s highest sports authority. “People want to know who the champions of France, of Portugal, or England are. There are no champions that come from other countries.”

Spanish law allows only teams in Spanish territory to participate, plus those from the tiny mountain nation of Andorra between Catalonia and France. That means Barcelona would have to win support from Spain’s government and Parliament to pass a law giving Catalan teams an exception like Andorra’s.

But Cardenal said Andorra got its exception because of its rather quirky history, in which the country’s two figurative heads of state are the French president and an archbishop of a Spanish diocese.

The exception, he said, “can’t be used as a model for a different situation.”