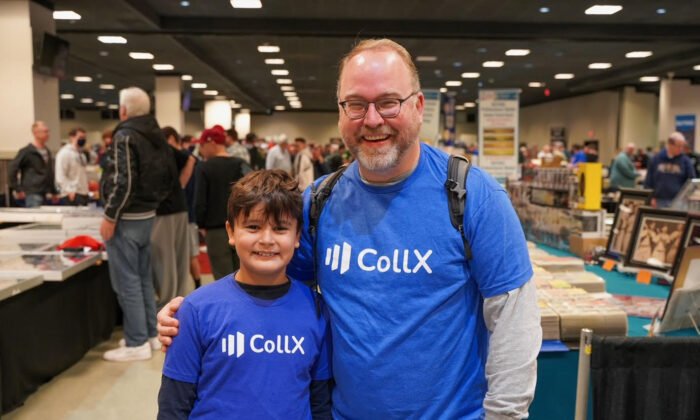 An idea taking flight: Father and son Ted Mann and his 10-year-old son Charlie, looking for deals at a recent sports card collectors show. The Philadelphia residents came up up with the idea for CollX - an app for sports card collectors that lets those on it know the value of their cards. The app was launched in January, and has more than 40,000 collectors on it and 15 million cards pictured, so far. (Photo courtesy Ted Mann)
US

A sports card app that was inspired by a 10-year-old boy after he and his 7-year-old brother discovered their dad’s collection in the basement of their home, is growing in value for collectors around the world.

For those who lost their shoeboxes full of sports cards when their mother threw them out when they weren’t looking, they likely now know a valuable piece of their childhood—both sentimentally and monetarily—was lost forever.

Those who were able to keep them from the clutches of the trash bin, can take a picture of their cards, upload them onto the app and see what they’re worth in a matter of seconds.

CollX—which was launched in January by Philadelphia resident Ted Mann—is a tool that now has more than 40,000 collectors registered and more than 15 million cards (baseball, football, basketball, hockey, and soccer) on the app.

Mann’s two sons, Charlie, 10, and August, 7, were enjoying their Pokemon cards while they were at home during the Covid-19 pandemic and started getting into sports cards.

“After they discovered my old baseball cards in the basement, they started Googling them and looking them up on eBay,” Mann said. “They would say, ‘Dad, your Rickey Henderson rookie card is worth this! This card is worth that!’

“We wanted to create an app that would make it super simple to take a picture of any baseball, football, or basketball card and instantly get the average price or comparable price of the card.

“That way, people could continue building their collection, or possibly sell or trade the card if they were interested in doing so.”

Mann said CollX is a tool for more than 40,000 collectors, and it’s growing at breakneck speed.

“If the number of collectors on the app keeps growing like it is, we’re going to have twice as many [80,000] this month. It’s for people building their collections, wanting to know the value of their cards, and ultimately, it also will be for transactions.”

“I love everything about trading cards, except trying to figure out what they’re worth,” Charlie Mann said. “When we scanned in the card of Ozzie Smith, it came up as $82. We thought it was a great deal, so we bought it.”

“On CollX, you can even look up your friends and family and see their collections, too,” his dad added.

Although Ted Mann had not collected sports cards himself for at least a couple of decades, he was surprised to see that the hobby remains as popular as ever for people of all ages.

“We conducted a large market research study and have discovered that 33 percent of the population in the United States has sports cards in their homes,” he said. “That’s 85 million people.

“We wanted to create an app that would make it super simple to take a picture of any baseball, football, or basketball card and instantly get the average price or comparable price of the card. That way, people could continue building their collection or possibly sell or trade the card if they were interested in doing so.”

“I spent the past 10 years of my career running companies all in the field of image recognition and visual search, and so it turns out that technology works extraordinary well for trading cards,” Mann added. “I started looking around for an app where you could look the value of cards up. I thought there would’ve been one.”

There are other sports card apps such as Card Ladders, Center Stage, and Sports Card Investor, which showcase higher-end professionally graded cards to better document their condition, but there wasn’t one that would produce the value of a card through image recognition.

Using visual search technology, collectors on the app can take a picture of their card and within seconds, the average value of it pops up.

CollX is the third app that Mann has worked on using visual search technology. (Slyce specialized in the search for retail items and Partium in finding parts).

The CollX app is available through the Google Play Store and the IOS App Store, said Mann, who credits his son Charlie with coming up with the idea. It’s like going to a sports collectors show or convention on your SmartPhone.

“Participation in the hobby is at an all-time high,” Mann added. Because of the value and high popularity of cards returning, investors are now involved.”

The popularity of sports card collecting was evidenced at Ideal Baseball Cards on April 12, a sports memorabilia shop on Cincinnati’s West Side that has been in business for 40 years. The shop that sells new and vintage items was deluged with a few hundred fans and collectors attending the Cincinnati Reds home opener that day.

Although building collections through online methods such as apps can be a good way to go, collectors sometimes are at a disadvantage because they don’t often actually see the card up close or get to handle it.

Another downside is that when a card pops up on an app, the value or price often is the amount for the last time that card sold, Ideal Baseball Cards shop Owner Mike Siska told The Epoch Times.

Siska encouraged collectors to shop around to help make the decision of whether to buy a card.

“The apps help, and they’re great,” but you can’t always go by those numbers for what a card is truly worth,” Siska said. “Use a couple of other barometers to help determine the value of a card and if it’s worth buying. Nowadays, that’s hard to determine because there are so many variations of apps and what they do.”

Doug Heflin, who works with Siska, noted that the Center Stage App also was helpful.

Similar to CollX, Center Stage identifies a card once it is scanned.

“One thing about Center Stage is that it identifies cards out of sub-sets, or special-issued inserted cards,” Heflin said. “Some of the other apps don’t do that, and that makes it a little harder because there can be 10 or 15 different card sets going on at the same time.

“Besides apps, there’s a lot of other places you can go to determine the prices or values of cards,” Heflin added.

“There’s auction sites, eBay, catalogs, and Beckett.com. With the popularity of sports card collecting right now, there are so many places to look up card prices and values to help make a decision on how much to spend.

“The important thing to know is that collecting is fun, and keep it fun. You don’t always have to look at the money or what something is worth. In the hobby, do what’s fun and collect what you like.”

Ted Mann said it’s all been fun for him. Because of his sons, he has gotten back into the sportscard collecting.

Charlie’s 12-year-old sister, Carolyn, jokes with him and says she’s going to sell his cards. Their Dad realizes she’s only kidding him, or so he hopes.

In May, he is expanding CollX into a marketplace-like atmosphere. He plans to turn the app into a more interactive experience between collectors who are interested in buying, selling, or trading cards on the app.

Right now, collectors can message each other about cards on the app to see if its owner would be interested in buying, selling, or trading.

When the CollX App was launched in January, it was the same month e-commerce and sports apparel giant Fanatics purchased Topps for a reported $500 million. Topps has been producing sports cards since 1951 and collectors anticipate that Fanatics will bring changes to the hobby.

“I think it’s an exciting new era in baseball card and sportscard collecting,” Mann said. “People need tools and apps to research their hobby and the value of what they have.

“CollX can be so much more.”