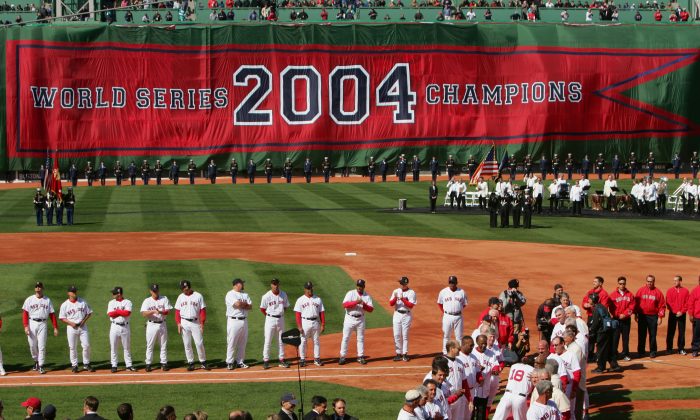 The Boston Red Sox celebrate their 2004 World Series Championship during a pre-game ceremony prior to the game against the New York Yankees at Fenway Park on April 11, 2005 in Boston, Massachusetts. The Red Sox won 8-1. (Ezra Shaw /Getty Images)
12- OBSOLETE

Mid-summer 2014 and the sports books of all kinds keep getting published for all kinds of tastes.

Below is a sampling of just a few of the worthies out for their for your sports bookshelf.

Brooks by Doug Wilson (St. Martin’s Press, $26.99, 340 pages) is the biography of legendary Brooks Robinson. Many anecdotes and stats blend in this engaging account of one of the top third basemen of all time. Out of Little Rock, Arkansas, Robinson made his way to the majors in a hurry and once there stayed for a long time racking up 18 All Star selections and 16 Gold Glove awards. Author Wilson has dug deep and produced a winning bio.

Miracle at Fenway by Saul Wisnia (St. Martin’s Press, $26.99, 295 pages) is a celebration and flashback of the hard fought championship season of the 2004 Red Sox of Boston. New insights intermingle with old stories. This book is focused on how and why “the curse was broken” is recommended for BoSox boosters who want to read about a happier time than 2014 is for the team from Fenway.

Heading the list is Strike Four by Tom Batiuk and Chuck Ayers, 231 pages of delightful, entertaining, perceptive and beautifully told accounts of 25 years of baseball memories from Crankshaft in words and pictures and cartoons. Aptly sub-titled “The Crankshaft Baseball Book,” Strike Four wondrously recounts the life and times of Ed Crankshaft. WORTH OWNING

The Browns Bible by Jonathan Knight, a mother lode of 599 pages, comes the complete history Game-By- Game of the Browns of Cleveland. For reading, for reference, for argument settling, this is the book for fans of the team and sports fans in general. The territory covered is all about the franchise from 1946-2012. NOTABLE

Classic Steelers by David Finoli (Kent State U, 227 pages, paper) is a treat for all fans of this legendary team. Fifty Greatest Games are given the up close and personal look.

Unbeatable by Jerry Barca ($15.99, 310 pages) is focused on the 1988 championship season of Notre Dame’s football team. All the excitement of that special time is played back.

A flashback to an earlier an earlier team —The ’63 Steelers by Rudy Dicks (307 pages, paper) is also worthwhile reading especially for fans of that team. Fascinating research by Dicks into a team that was not supposed to be there at the end. However, a bunch of unsung players prevailed and pressed on to compete for a championship.  Well written. ABSORBING

FROMMER SPORTSNET (syndicated) reaches a readership in the millions and is housed on Internet search engines for extended periods of time.