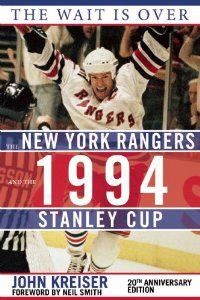 It's been 20 years since the Rangers won the Stanley Cup and author John Kreiser captures it in The Wait Is Over. (image provided by author)
12- OBSOLETE

“The Wait Is Over,” “Don’t Let Us Win Tonight,” and Other Special Tomes
By Harvey Frommer, Contributor
Share
FacebookFlipboardTweetRedditEmail
MOREPRINTFONT BFONT S

For summer reading, a host of assorted sports titles are there for the reading and browsing. They run the gamut in price, quality and subject matter so there is something for everyone.

With the New York Rangers in the news this spring in their Stanley Cup battles, a new book on an old time and fantastic Ranger team is now out there for your enjoyment. Written by the highly respected John Kreiser and put out by Sports Publishing ($24.95, 196 pages), this slim volume is a must for hockey fans of all persuasions and especially for Ranger fans. Titled The Wait Is Over, the focus of Kreiser’s terrific tome is on the Rangers ending of a wait of more than a half century and their winning of the 1994 Stanley Cup. Carefully crafted and using a medley of sources, the book brings back the time in words, stats, and pictures. WORTH BUYING

Don’t Let Us Win Tonight by Allan Wood & Bill Nowlin (Triumph, $24.95, 320 pages) celebrates and re-creates the 2004 incredible playoff run of the Boston Red Sox. Carefully crafted, filled with succinct and insightful interviews, the terrific tome is just perfect for all Red Sox fans and for that matter all sports fans.

Another tie-in to a remarkable anniversary is A Summer to Remember by Lew Freedman (Sports Publishing, $24.95, 300 pages). The book’s focus is on the 1948 Indians of Cleveland of Bob Feller, Satchel Paige, Larry Doby, Bill Veeck, Lou Boudreau and other worthies. Freedman, author of more than 60 sports books, has out-done himself here. A Summer to Remember is a championship book about a championship team.

From Taylor Trade comes a trio of worth readings:

March 1939 by Terri Frei (Taylor Trade, $24.95, 237 pages) is a remarkable piece of sports history telling as it does the story of the first NCAA basketball champions, Oregon’s “Tall Firs” in a world on the verge of war, in a basketball world dominated by the New York city game. The intermingling of the narrative of the Oregon team with story of what was going on in the culture at large sets this terrific tome apart. BUY IT NOW

Two interesting paperbacks from Taylor are The Outlaw League and the Rattle That Forged Modern Baseball by Daniel R. Levitt ($18.95, 314 pages) and Mudville Madness by Jonathan Weeks ($16.95, 221 pages).

The book by Levitt is an in depth look at the Federal League that in 1913 announced it was a Major League and went to war with the established leagues. A riveting recreation of time, place, characters. The book by Weeks is a compendium as its sub-title notes of Fabulous Feats, Belligerent Behavior and Erratic Episodes on the Diamond. Organized by decades, the book even gives a shout out to me in the bibliography.

This Day in Philadelphia Sports History by Brian Startare & Kevin Reavy (Sports Publishing $19.95, 312 pages) is a nifty idea showcasing as it does 365 days of the peaks and valleys in the team’s history. Some of the entries are reaches like January the first 1935 and the losing participation of the Temple Owls in the first Sugar Bowl. Overall, there is much to like about this cleverly crafted book.

All kinds of tomes have surfaced in 2014 tapping into the 100th anniversary of Wrigley Field. As a lot, they form a kind of mixed bag. Not the case for Before Wrigley Became Wrigley by Sean Devaney (Sports Publishing, $24.95, 268 pages). As the book’s sub-title announces – The Inside Story of the First Years of the Cubs’ Home Field. And we are back then into Weeghman Park on the north side of Chicago. Bold, bizarre, even bawdy at times, in the skilled hands of Devaney, Before Wrigley Became Wrigley is carefully researched, prime baseball history. HIGHLY NOTABLE