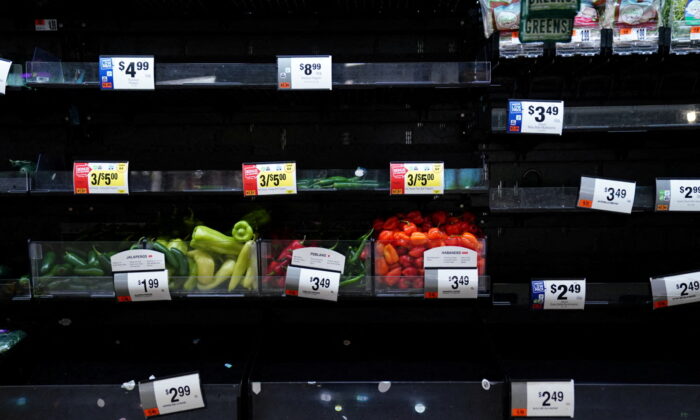 When Venezuelan immigrants in the United States see items missing from store shelves, they worry about the direction of the United States and remember the empty shelves in their home country as it fell into socialism.

Once the richest country in South America, today many in Venezuela are impoverished and many are leaving to survive. But it wasn’t always like that. Patricia Andrade of Miami, Florida is founder of Venezuela Awareness, a non-profit organization that helps Venezuelans arriving in the United States get started with basic needs. She came to the United States about 35 years ago. At the time, elections were free, and it was a normal country, Andrade told The Epoch Times.

“We would go to the supermarket and find everything we wanted,” she said. But in 2013-2014, the economy collapsed, and things changed drastically

“They began to find, in Venezuela, the shelves were empty. They would go to a store and part of the store was empty,” Andrade said. “If you try to find basic things, you can’t find it. It was not only one product; it was many products. For example, you couldn’t find cereal, milk, ketchup—basic things. Toothpaste, soap, deodorant—I remember my son said they were afraid to go out without deodorant. Shampoo, oil for cooking, I remember sugar—a lot of times you couldn’t find sugar at the supermarket.”

She said it happened suddenly, not little by little. And for those who have seen food security disappear from a country, shortages in the United States, such as baby formula, are worrisome. Lately, her grocery store has been limiting the amount of cream cheese customers may buy, and sometimes they sell out. She notices sparse clothing racks at department stores, smaller shoe selections, more shelf space between products at the arts and crafts store.

It is especially discouraging, she said, for people just arriving from Venezuela, who fear the problems they fled are creeping into the United States.

Esteban Hernandez, 26, recalled his childhood on the island of Margarita, Venezuela, where food and power shortages persisted. The country rationed electricity and they had to plan around the hours that his sector would have power. Sometimes electricity was on just four hours for the day, he said.

“There were always a few days, or weeks, or months where you couldn’t find specific products. Sometimes it was scarcity of sugar. Sometimes oil; sometimes coffee, you know, basic stuff,” Hernandez told The Epoch Times. “Usually, you’ll stop seeing those products for a few weeks, maybe a few days, maybe a month or two months, but then after a certain time you would see it again on the shelves—maybe a little bit more expensive—but you’ll see it restocked.”

His family came to the United States in 2011 after about three years of worsening conditions.

“The government started becoming more radical when it came to certain policies, like price controls,” Hernandez said. “Then they started seizing the private property of companies that were actually producing food.” Soon the government-owned businesses that produced flour and other products. The government set the prices and controlled how much product was available.

He was not fully aware of the economic changes as they were happening, but even as a child, Hernandez knew something was off when his family started standing in lines for basic items.

By 2017, his family was in the United States but they saw photos of people in Venezuela eating plants and looking for food in the trash. Around this time many people lost weight involuntarily and called it the “Maduro Diet” after Venezuela President Nicolas Maduro, Hernandez said.

It was concerning during the pandemic, Hernandez said, when the U.S. government was telling businesses what to do, and when it decided what businesses were essential. Now he sees the baby formula missing from shelves and other occasional shortages. Hernandez has quipped to his family that it feels like Venezuela.

Having lived with unreliable power, he is concerned about energy policies like the Green New Deal.

“The Democratic Party is giving voices to crazy people—to people who actually defend the system that we have right now,” Hernandez said. “And they wonder why they’re losing the Hispanic vote. It’s because they’re proposing the same stuff that forced a lot of Spanish people to abandon their countries.”

Despite his concerns, Hernandez remains optimistic about the United States because it has more than one active political party. As long as multiple voices are allowed and engaged, there will be people defending capitalist ideas and standing up for democracy, he said.

Many who lived through Venezuela’s thinnest years, like Jorge Galicia, are interested in politics because it is behind the problems.

For Galicia, 26, now of Miami, 2014-2018 were the worst years. “During that time, I was definitely not eating as much as I wanted to eat. For example in my house, we stopped eating meat because it was either unaffordable or not existing. I lost a lot of weight during those years,” Galicia told The Epoch Times.

He recalled shortages of almost every product and limitations on how much you could buy. People stood in line for hours and sometimes all day for a piece of bread.

Today Galicia works for a think tank, The Fund For American Studies, and speaks to students at college campuses about how Socialism failed in Venezuela and why it should not be implemented in the United States. But he notes that many young people in the United States believe Socialism, free college and other handouts are a good idea.

Items missing from U.S. store shelves bring flashbacks about life in Venezuela, Galicia said, but it is not close to the food crises he experienced.

“I mean, it was literally starvation. People were looking through the garbage just to eat a little bit,” he said.

“Even though we’re seeing some levels of scarcity, I think it is not because of the same reasons,” Galicia said adding that in Venezuela, the government implemented price controls because of hyperinflation, then it took over many businesses and production in factories and agriculture went down.

“I wouldn’t say that is happening right now in the U.S.,” Galicia said, but there are proponents of policies such as price control. “I think that’s incredibly dangerous.”

“It certainly seems like the current path America is following is always increasing the government and keep spending more,” Galicia said. “If we keep following the same direction that we’re following right now, we might end up being in a really bad economic situation that, who knows, maybe long term could be similar to what’s going on in Venezuela. We need to keep fighting for fiscal responsibility. Government cannot spend more than what it earns.”