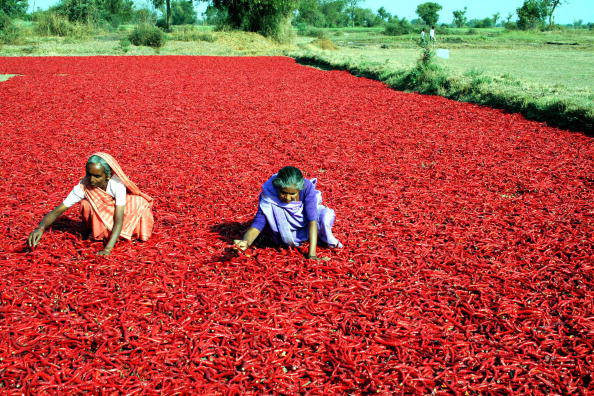 Indian women spread red chilies across a surface for drying at Sertha village on the outskirts of Ahmedabad,13 February 2007. The price of red chillies in India has increased by upwards of 20% due to a below average crop. (Sam Panthaky/AFP/Getty Images)
India

Spices of the Indian Kitchen (Photos)

The story of the aromatic Indian spices dates back to ancient times, which even lured many noblemen to the Indian sub-continent.

Spices have given signature flavors to Indian recipes; the delicacies are prepared in a way to absorb the unique aroma in their contents. Every Indian state, region, and community boasts of its own rich repository of spicy Indian cuisines.

Even beverages have not escaped the spicy-fascination: there are recipes for spicy tea (the masala chai), spicy-herbal cold drinks, and even spicy ice creams.

Indian spices also play an auspicious role in wedding rituals and festivities—thus becoming one with the country’s culture and traditions.