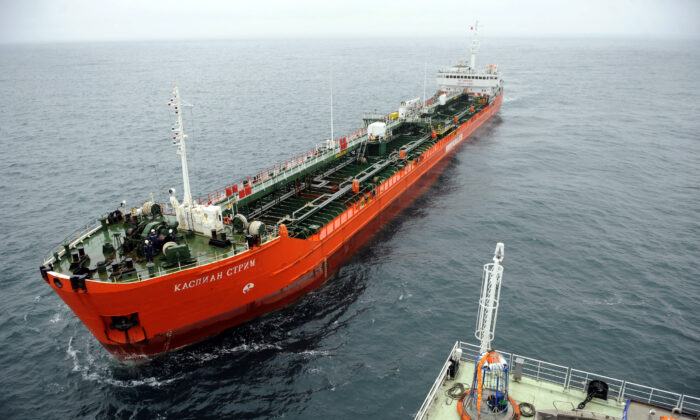 Anne Zhang
Anne Zhang is a writer for The Epoch Times with a focus on China-related topics. She began writing for the Chinese-language edition in 2014.
View profile
biggersmaller
Print

The European Union applied sanctions on the importation of Russian oil to reduce its dependence on Russia as a source of energy. The EU sanctions combined with those applied by the United States have caused Russia to deeply discount its oil prices. The discounts have provided an opportunity for China and India to increase the volume of oil imported from Russia.

On the same day, due to the EU and U.S. sanctions, the price of Russian Urals was $34/barrel lower than the price of Brent crude. This provided an opportunity for India, which is facing high inflationary pressures, to buy the lower-priced crude oil.

Unlike India’s open tenders for Russian oil imports, Chinese oil companies are not so transparent. Instead, they are quietly importing Russian oil for fear of being hit with secondary sanctions.

According to the International Energy Agency, China is the largest single buyer of Russian oil. In 2021, China imported an average of 1.6 million barrels of Russian crude oil per day.

Vortexa Analytics says China’s oil imports from Russian seaborne shipments during 2022 have steadily risen. During the first quarter, China was importing 750,000 BPD and in May the total rose 47 percent to 1.1 million BPD.

Also in May, China received an additional 800,000 BPD of Russian oil via pipelines under an inter-governmental agreement. The actual May total is 1.9 million BPD, which is 15 percent of China’s total demand.

Russian oil imports to India and China increased by 1 million BPD. The greatest increase, 0.7 million BPD was attributed to India. However, after the latest EU and U.S. sanctions take effect, this increase will not be sufficient to satisfy Russia’s exportation needs.

Russia is the world’s third-largest oil producer after the United States and Saudi Arabia, as well as the world’s largest refined oil exporter and second-largest exporter of crude oil.

In December of 2021, Russia exported 7.8 million BPD of oil and products, of which 4.5 million went to Organization for Economic Co-operation and Development (OECD) member countries.

On May 4 of this year, Moscow’s energy revenues were delivered another blow when the EU proposed a sixth set of energy sanctions against Russia.

EU Council President Charles Michel tweeted the new sanctions would immediately affect 75 percent of Russia’s oil exports to EU countries. S&P Global Commodity Insights estimates Russian crude oil exports will drop by 2.1 million BPD within six months due to the sanction. By the end of the year, Russia can expect an additional loss in sales of 1.2 million BPD of oil refinery products.

Poland and Germany have pledged to stop importing Russian crude through the Druzhba pipeline by the end of this year. In total, the EU’s importing of Russian oil will have dropped 90 percent by 2023.

However, the S&P Global analysis at the end of May suggests the EU’s sanctions against Russia have mainly driven the restructuring of the global supply chain. While the EU has worked to reduce its dependence on Russian oil, China and India have done the opposite and capitalized on the drop in Russian oil prices caused by the sanctions. At the same time, Middle Eastern producers have rerouted their oil exports to EU customers.

Organization of the Petroleum Exporting Countries (OPEC) ministers said recently that the global oil market supply is balanced and the current spike in fuel prices is mainly due to refinery capacity shortages and out-of-control geopolitics.

An OPEC representative said the current sanctions have mainly diverted its oil exports to other regions, and the group of oil-producing countries will see how the new EU sanctions affect the flow of Russian oil.

India’s attitude is different from that of the United States, Japan, and Australia.

Kapadia said India’s main oil suppliers have traditionally been Iraq, Saudi Arabia, and the United Arab Emirates but those countries decided to increase their oil prices. As a country that imports 80-85 percent of its oil, India can hardly afford to not take advantage of Russia’s 20 percent discount on crude oil prices.

But despite this increase in oil imports from Russia, India still shares a common strategic goal with the United States of “containing the Chinese Communist Party (CCP)” in the Indo-Pacific region.

This past May, India joined the quadripartite meeting held on the 24th in Tokyo with the United States, Japan, and Australia. After the meeting, the four countries announced they would provide more than $50 billion in infrastructure and investments in the Indo-Pacific region. They will curb the CCP’s aggression citing “the militarization of disputed features, the dangerous use of coast guard vessels and maritime militia, and efforts to disrupt other countries’ offshore resource exploitation activities”

Russia and China Distrust Each Other

On the evening prior to the EU announcing its sanctions on Russian oil imports, Russian Foreign Minister Sergey Lavrov said the Kremlin would focus on developing relations with China since relations with the United States and the EU are severed.

Trade between China and Russia has been increasing over the past 20 years, reaching a record $147 billion by 2021.

However, the Council on Foreign Relations (CFR), a non-partisan think tank, said in its June 14 report on Russia-China relations that Russia’s economic dependence on China is much greater than vice versa, which raises concerns in Moscow.

Now that the EU has imposed sanctions on Russian oil imports, Russia is likely to become more dependent on trade with China. China has a huge demand for energy which makes Russia’s rich energy resources of oil, natural gas, and various minerals, very attractive.

But despite this activity, the CFR report also stated there is a lot of mistrust between the two countries.

For example, many Russian and Chinese officials, business leaders, and citizens do not trust each other. Both Russian and Chinese people have expressed nationalistic sentiments that belittle each other, and companies from both countries have expressed difficulties in working together. Despite the long border between the two countries, tourism, and academic exchanges are very limited.

Both the Communist regime and Russia are de-Americanizing, but Russia is increasingly using the euro in its foreign trade, while China is using the yuan and ruble more. Currently, China has not joined Russia’s SPFS financial system and is expanding its Renminbi payment system.

As to defense matters, Russia and China have strengthened military cooperation since 2014, but the sale of Russian arms to China has declined in recent years. One explanation for this is Russia’s fear that China would steal its technology.

In contrast, India’s relationship with Russia has remained friendly and stable since the Cold War. Russia has supplied India with weapons and much of India’s oil. This cooperative relationship helps to alleviate Russia’s dependence on China for its energy exports.