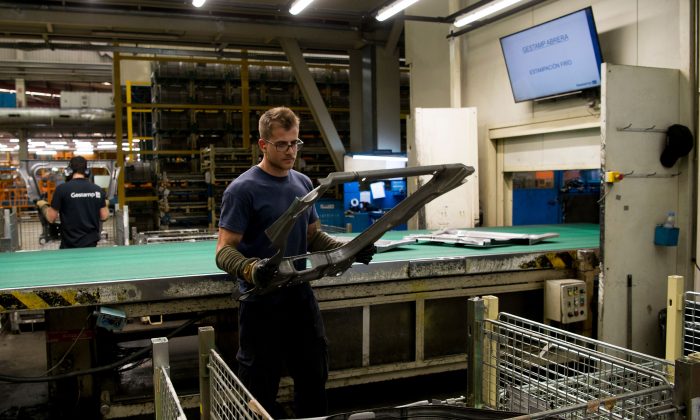 An operator works on processed metal at the Gestamp Automocion factory branch in Abrera, near Barcelona, on June 19, 2018. (Josep Lago/AFP/Getty Images)
Europe

Spain Recovering From Financial Crisis, but Fears a New Recession

BARCELONA, Spain—For Enric Casal, Spain’s deep economic crisis was both his downfall and his salvation.

After losing his job in a car company in Madrid, he was forced to resort to asking for food and clothing for his family at a soup kitchen run by the Red Cross.

Staff there spotted the way he got on easily with others and asked if he would like to volunteer. He was eventually hired and is now doing something he really enjoys.

Though Casals, 47, sees “la crisis,” as it is referred to in Spain, as the best thing that happened to him, he cannot help fearing for the future.

“Things have got better, of course. Unemployment is down. People are more optimistic. Investment has returned,” Casal told The Epoch Times.

“But look underneath the surface and we are not looking at an economy on the same scale as before 2008. Perhaps we never will.”

He is among the 81.7 percent who told a recent survey that they feared Spain would be hit by a new slump within the next five years.

The poll, by consulting firm 40dB for El Pais newspaper, found that nearly a quarter, or 23.2 percent, of the 2,000 respondents were sure a new economic crisis lay around the corner, while 58.5 percent viewed it as probable.

Spain’s decade-long building boom turned to bust in 2008 at the same time as the world financial crisis.

Unemployment shot up to 27 percent, and for young people, aged 18 to 24, it approached 50 percent in some parts of the country.

Tens of thousands were forced to emigrate in search of work.

When questioned in the survey about who they blamed for the recession, Spaniards pointed the finger at the country’s political class and mismanagement in the banking sector.

Also in the frame were the global financial situation and Spain’s get-rich-quick housing bubble, which had to burst.

The so-called troika of the European Central Bank, the International Monetary Fund, and the European Commission was held responsible for forcing Spain to enact severe cuts when the crisis happened.

Even immigrants were blamed by 29 percent of respondents in the survey.

Flash forward six years, and Spain has come a long way from the dark days of 2012 when it had to request a 100 billion euro ($113 billion) bailout for its banking sector.

Now, however, its problems are more to do with politics and less to do with the economy.

An independence drive in wealthy Catalonia threatened to tear the country apart. Also, the political establishment is fragmented after the emergence of the center-right Ciudadanos party and the far left Podemos, both born out of the popular anger from the first crisis.

Mari Carmen Rodríguez, 63, a divorcee who lives alone in Barcelona, says it “makes her stomach turn” when she hears people talk about the crisis ending.

“The recession never ended. I have not noticed life getting any better. Life is just the same for me,” she said.

Rodríguez has been out of work for the past five years. At her age, she has little chance of finding work in the future. She survives on 400 euros ($454) per month and pays a reduced rent as she lives in social housing.

The name of Espera, which means hope in Spanish, seemed a bitter irony when the country’s economy hit rock bottom. This small town in Andalusia in southern Spain had, for a time, the highest unemployment rate in the country at 39 percent in 2013. The same year, the national rate was 25 percent.

The biggest employer in Espera, which has 4,000 inhabitants, was the construction industry, which was badly hit by the crisis.

Espera, like the Spanish economy, is on the mend. The unemployment rate has fallen to 19.8 percent, but it is still above the national rate of 15 percent.

Like many other young people in the town, José Quereras, 24, decided to leave and went to London. He found work in bars and restaurants but, after two years, believed that Britain did not hold any future for him.

Back in Spain, he now works on a building site.

“The trouble is that everyone is saying that we may have another crisis very soon in Spain. I can’t face leaving again, so I am going to try to re-train as a teacher,” he said.

“My family and, I think, my future is in Spain.”