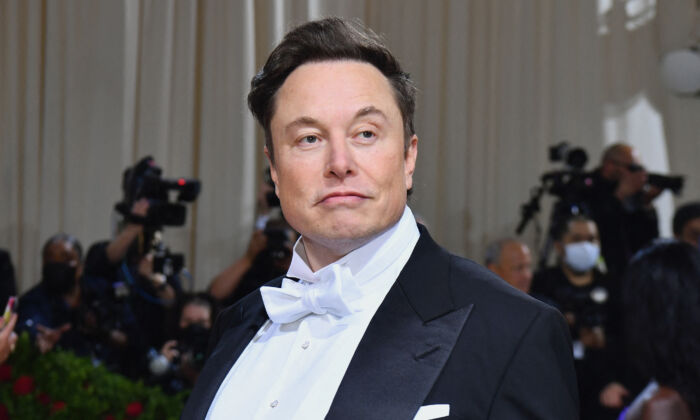 Elon Musk arrives for the 2022 Met Gala at the Metropolitan Museum of Art in New York on May 2, 2022. (Angela Weiss/AFP via Getty Images)
Companies

The president and COO of SpaceX has defended the aerospace company’s CEO Elon Musk against allegations of sexual misconduct in an email to employees, according to CNBC.

According to an email allegedly obtained by CNBC, SpaceX President Gwynne Shotwell addressed the allegations that first emerged in a Business Insiders report denounced by Musk as “utterly untrue” and a “politically motivated hit piece.”

“Personally, I believe the allegations to be false; not because I work for Elon, but because I have worked closely with him for 20 years and never seen nor heard anything resembling these allegations,” Shotwell allegedly wrote to all employees in an email last Friday. The Epoch Times has not seen or verified the authenticity of the email.

According to Business Insider’s report, which cited interviews and documents the outlet had allegedly obtained, SpaceX supposedly paid a flight attendant $250,000 in 2018 to settle the sexual misconduct claim against him. The Epoch Times has not seen or verified the authenticity of the documents.

Musk took to Twitter to address the allegations, but he did not state specifically what those accusations were or name Business Insider.

“The attacks against me should be viewed through a political lens—this is their standard (despicable) playbook—but nothing will deter me from fighting for a good future and your right to free speech,” he wrote on Twitter on May 20.

Musk has also challenged the honesty of Business Insider’s source at the center of the sexual misconduct claim, who he described as “this liar.”

He called on his accuser to “describe just one thing, anything at all (scars, tattoos, …) that isn’t known by the public. She won’t be able to do so, because it never happened.”

Prior to the report’s publication, Musk warned that “political attacks” on him would “escalate dramatically in coming months.”

Though he did not cite the reason for this statement, the world’s richest man has recently declared he will vote Republican at the next election and has expressed critical views of the Left and the Democratic Party, calling it the party of “division and hate.”

For this reason, Musk agreed with a Twitter user’s characterization of the article as politically motivated. One user wrote: “Where were these wild accusations against [Elon Musk] before he took a stand against the establishment?” Musk responded with “Exactly.”

“And, for the record, those wild accusations are utterly untrue,” he added.

The alleged incident purportedly took place aboard a SpaceX jet on a flight to London in 2016, Business Insider reported. The flight attendant reportedly told her friend that Musk asked her for a “full body massage,” according to documents.

Musk reportedly denied the claims in a statement to Business Insider, saying there is “a lot more to this story.”

“If I were inclined to engage in sexual harassment, this is unlikely to be the first time in my entire 30-year career that it comes to light,” he wrote, calling the story a “politically motivated hit piece.”