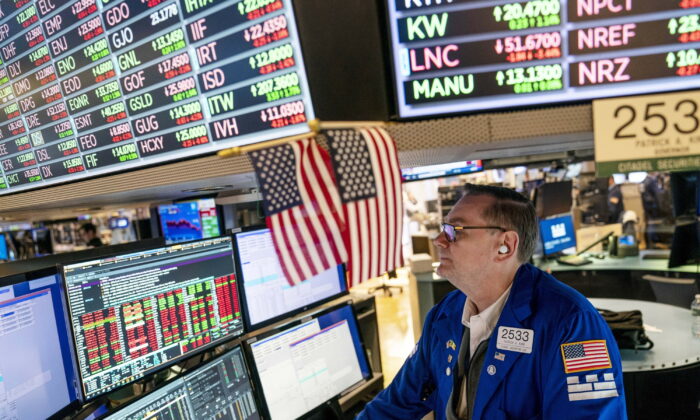 For the first time since 2020, the S&P 500 Index has fallen into a bear market as investors’ recession fears continue to mount.

The S&P 500, which market analysts consider to be the best measurement of the overall U.S. stock market, tumbled by more than 2 percent on May 20, falling briefly into bear market territory during the trading session.

Stocks slip into a bear market when the major indexes tumble 20 percent from their highs. Investors pay attention to this figure because it affords them an opportunity to compare previous downturns in the financial markets and determine where equities could be headed next.

Some of the top names listed on the S&P 500 are Amazon, Microsoft, Home Depot, JPMorgan Chase, and Johnson & Johnson.

The tech-heavy Nasdaq Composite Index is already in bear market territory. The Nasdaq has plummeted by nearly 29 percent so far this year, staying at slightly more than 11,000. The Dow Jones Industrial Average, weighted in favor of banks and industrials, isn’t too far behind its benchmark index counterparts, as it has declined by about 15 percent to nearly 31,000.

Since the Great Depression, there have been 17 bear or near-bear markets, and nine of these were accompanied by a recession, according to data from LPL Research. It’s estimated that the average bear market lasts about a year (11.4 months, to be specific). The longest S&P 500 bear market occurred between March 2000 and October 2002, plunging by 49.1 percent. The quickest bear market was at the start of the COVID-19 pandemic; it lasted only 1.1 months and cratered by 33.9 percent.

“Going back more than 50 years shows that only once was there a bear market without a recession that lost more than 20 percent, and that was during the Crash of 1987,” LPL Financial Chief Market Strategist Ryan Detrick said, “with other near bear markets without a recession bottoming near 19 percent corrections in 1978, 1998, 2011, and 2018, not far from the recent lows.”

The current downturn has taken only a third of that time, “so it probably has more downside room to run, albeit punctuated by interim rallies,” according to George Ball, chairman at investment firm Sanders Morris Harris.

Goldman Sachs recently released a recession manual to its clients. Bank strategists noted that the S&P 500 declined from peak to trough by a median pace of 24 percent across 12 recessions. If the index were to emulate this decline, it would plunge to about 3,650.

Recession woes are driving this downward trend. Investors ostensibly believe that an economic downturn could soon happen. In April, a monthly Bank of America survey of fund managers revealed that they’re pessimistic about the stock market, with a global recession seen as the most significant risk. A separate Bank of America poll highlighted that investors are hoarding cash at the highest rate since September 2001, buoyed by worries over an economic downturn.

Analysts also note that traders realize fiscal and monetary stimulus and relief packages won’t bail them out this time as they did two years ago.

Esther George, president of the Federal Reserve Bank of Kansas City, told CNBC on May 19 that market turbulence won’t deter the central bank from altering its inflation-busting mission.

“I think what we’re looking for is the transmission of our policy through market’s understanding and that tightening should be expected,” she said. “So it’s not aimed at the equity markets in particular, but I think it is one of the avenues through which tighter financial conditions will emerge.”

Lisa Shalett, chief investment officer at Morgan Stanley Wealth Management, explained in a research note on May 16 that investors are watching the “potential for a growth scare if not an outright recession.”

While recession concerns are at the top of investors’ minds, inflation is still a chief worry. Target and Walmart released abysmal first-quarter earnings reports last week, confirming that higher costs are eating into their bottom lines.

The retail giants’ earnings have a growing number of market analysts fearful that their troubles will seep into other retail areas and the broader economy.

“With the economy having surprisingly contracted in the first quarter and with inflation eroding household spending power, it’s not surprising that financial markets are starting to get a little bit concerned about the potential threat of a recession,” he said. “We don’t see this as an imminent story, though. In fact, actually, the activity data suggests growth is rebounding strongly in the current quarter.”

Until inflation cools down, the global supply chain crisis stabilizes, the effects of the Fed’s quantitative tightening are felt, and consumers start confidently spending again, it could be some time until stocks rebound. At the same time, Dave Sekera, Morningstar’s chief U.S. market strategist, thinks the pendulum has swung too far to the downside.

Fed Chair Jerome Powell is confident there won’t be chaos on Wall Street once the bear market starts.

“Volatility has been up a little bit, that has some effect on liquidity in some markets,” he noted in an interview with The Wall Street Journal on May 17. “Nonetheless, the markets are orderly, they are functioning.”