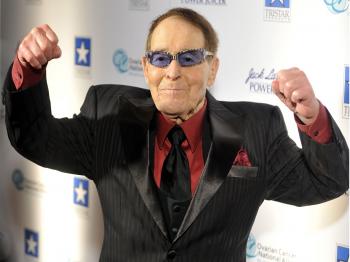 Mary Silver
biggersmaller
Print
Jack LaLanne, “Godfather of Fitness,” died this week. He changed American culture. When he was only 21 years old, he started a gym, long before going to the gym was something people did. It was 1936, still the Great Depression. One of the profiles published after he died said he was a gifted salesman, which is true, but he was more than that. He was a leader.

LaLanne devoted himself in a very disciplined way to his own fitness, strength, and to good nutrition. He created and sustained ways to share his knowledge with others. He stayed current and even cutting edge his whole career, mastering the Internet and social media in his ’90s after mastering television in its toddler, black and white years.

The key things that made him a leader were that he kept learning, he meant to help others, and he showed integrity.

When he started, the conventional wisdom said old people should be very careful of their breakable, creaky, geriatric selves. But he said, “Better to wear out than rust out,” and “People don’t die of old age, they die of inactivity.” Women were once called “frails,” and cautioned against exertion. When Jackie Kennedy was first lady, in the 1960s, she secretly lifted weights—it was just not done.

It seems laughable today, and LaLanne deserves much credit for changing those damaging ideas. He wanted women to be strong and old people to be vital and active, as he was. Since he started, people have studied and proved the tremendous power weight training and other exercise has to help even very old people (and frails, or dames) to be stronger and to function better.

There have been all kinds of health and fitness entrepreneurs. Some of them "are in business for themselves,” as the proverb says. That means selfish. Some sell bogus nostrums, and some are bullies. I won’t name names, but she appears on TV and in DVDs, screaming at overweight people, taking a very different tone than Jack LaLanne did.

There is a little vogue of boot camps and yelling in fitness instruction. The only reason drill instructors yell at recruits in real boot camps is to prepare them for combat. It is not done with real contempt. Marine Corps drill instructors secretly refer to their recruits as “my bunnies.” They care for them.

In his 1950s and 1960s television show, LaLanne welcomed his viewers, “Thank you for inviting me into your home.” His was an encouraging, playful, and respectful voice. “Please stand up. Give me a big smile.” Viewers were his bunnies.

His white German shepherd, Happy, lolled at his feet. He said the dog was lazy, like most Americans. Not bullying, but light in tone.

LaLanne wanted to help other men and women experience the energy and optimism he got from exercise and wholesome food. He was a leader because he was thinking of others, and seeing the best in others.

Everything he sold had actual value. No snake oil and no worthless devices. His cooking advice was good, his gadgets, such as the power juicer and balance boards, were good, his vintage TV shows on DVD were good. Someone wrote and asked him if he would update his exercises. He replied that the exercises were good 100 years ago, and they would still be good 100 years in the future.

An attitude like his will also still be good in 100 years.