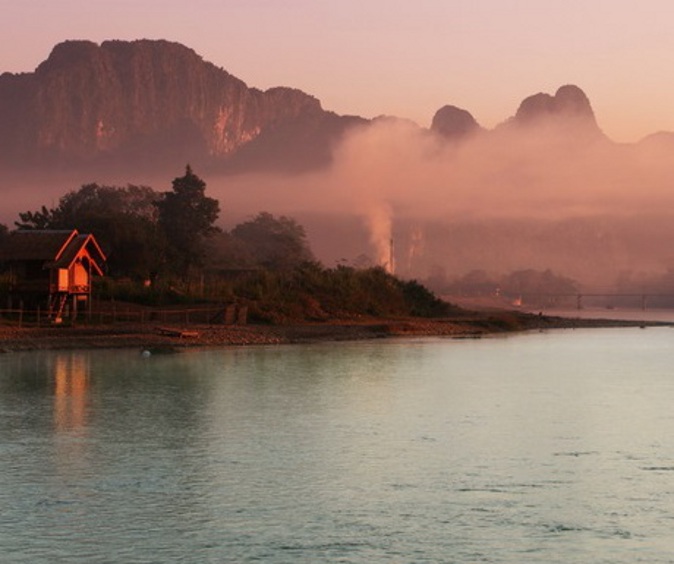 Southern Laos: Where the Mekong Blossoms

While many travellers head straight for the sybaritic charms of feted Luang Prabang, fewer sample the emerald rice plains of the south, with its stunning jungle karst formations, remnant Ho Chi Minh trail and some of the prettiest riverine villages in the country, the pinnacle of which is a group of tropical islands known as Si Phan Don (the Four Thousand Islands). It’s here that after her long journey from Tibet, the Mekong River fans out in myriad turquoise tributaries, wrapping herself around the islands of Don Khon, Don Dhet and Don Khong. Don Khon is the most stylish and where you can see rare Irrawaddy dolphins in a deepwater pool close to Cambodia.

While the north is synonymous with trekking, southern Laos also boasts some great jungle walks and zip-lining in the cool coffee-growing region of the elevated Bolaven Plateau. Before we get there though, allow us to take you on a little tour heading south from the capital of Vientiane. The road first takes you through colonial Tha Khaek, a developer’s dream they forgot to tell the developer about; for this cracked and pretty old French outpost is a delightful mix of peeling Chinese merchant-houses and elegantly faded villas. An hour north west of here is the country’s most famous river mountain cave, the legendary Tham (cave) Kong Lor; a nerve shattering 7.5kms ride in a longboat through an otherworldly underworld of darkness and church-high stalactites. The landscape it sits in is equally extraordinary, for Khammuane Province is a gothic mix of charcoal-black karst formations and dragon-green jungle.

From Tha Khaek the road heads south to sweltering Savannakhet, great for trekking in the neighbouring national parks, and packed to the gills with nostalgic shuttered French villas. On the balmy riverfront old boys play pétanque, while braziers crackle with aromatic fresh prawns and river fish. Further south, Pakse sits at a crossroads with Vietnam and nearby Thailand. It’s a busy, informal place buzzing with travellers who use it as a launchpad for visiting the Bolaven Plateau and its deliciously refreshing waterfalls, or as a departure point to get to Si Phan Don. Opened in the last couple of years, the Tree Top Explorer (Bolaven Plateau) is a series of 11 zip-lines, the most exhilarating of which crosses directly in the spray of a huge waterfall. Unusual accommodation is in 20m-high treehouses in the lush jungle of Don Hua Sao National Park.