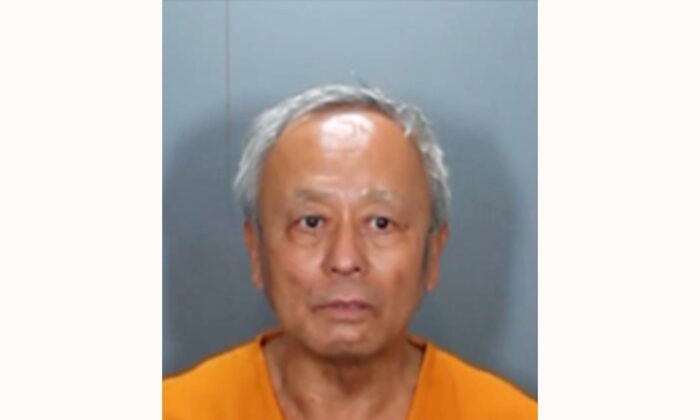 The man charged with killing one person and injuring five others after a Taiwanese service at Geneva Presbyterian Church in Laguna Woods, California, was once a member of a U.S.-based group controlled by the Chinese Communist Party.

The Orange County Sheriff’s Department said the shooting by the alleged gunman, 68-year-old David Wenwei Chou of Las Vegas, was “a politically motivated hate incident.” Sheriff Don Barnes said the suspect “was upset about political tensions between China and Taiwan.”

Barnes also indicated that the suspect, who wasn’t a regular attendee and had no known ties or affiliation with the church, secured the doors within the church with chains and tried to disable the locks with superglue before he opened fire.

Chou has been charged with one felony count of murder and five felony counts of attempted murder, according to the sheriff’s department. Dr. John Cheng, a 52-year-old family practice physician, was killed when he charged the gunman in an attempt to disarm him.

Ties to the CCP’s United Front

On April 2, 2019, the CCPPNR established a Las Vegas chapter, with Chou as one of the directors. He made a presentation with a banner calling for the “eradication of pro-independence demons” on that day, Radio Free Asia reported.

The CCPPNR was founded by the CCP in 1988. Its primary mission, as stated on its website, is countering separatist movements such as those calling for Taiwan’s independence. The CCP considers Taiwan to be part of its territory, even though the regime has never ruled the self-governed island.

The CCPPNR has at least 200 chapters in 90 countries, including 33 U.S. chapters that are registered under somewhat different names, but carrying the same slogan of “peaceful reunification,” according to a 2018 report by the U.S.–China Economic and Security Review Commission (pdf).

A 2018 Jamestown Foundation report also indicated that the CCPPNR has served to mobilize overseas Chinese communities in support of the CCP’s policies.

Then-Secretary of State Mike Pompeo said in a 2020 statement that the UFWD is the CCP organ “tasked with co-opting and neutralizing threats to the party’s rule and spreading its influence and propaganda overseas. The CCP regards this party apparatus as a ‘magic weapon’ to advance Beijing’s policies.”

In October 2020, the United States designated the National Association for China’s Peaceful Unification, the U.S. branch of the CCPPNR, as a foreign mission.

CCPPNR Las Vegas Chapter President Gu Yawen said that Chou left the local chapter in the second half of 2019. An old report containing a photo of Chou on the chapter’s founding day was no longer available on its website.

When asked about the suspect’s political hatred associated with the political tensions between the Chinese mainland and Taiwan, CCP Foreign Ministry spokesperson Wang Wenbin defined the incident as an immigrant and domestic gun violence issue on U.S. soil.

Barnes said Cheng charged at the suspect and attempted to disarm him before he was fatally wounded, buying time for other witnesses to subdue the shooter.

“Without the actions of Dr. Cheng, [there] is no doubt that there would be numerous additional victims in this crime,” he said.

Taiwan’s official representative in Los Angeles, Louis M. Huang, condemned the act of hate and violence, expressed his condolences to the families of the victims, and said assistance to the victims’ families is already on the way.

He told the Chinese edition of The Epoch Times that whether in Taiwan or abroad, most Taiwanese are compatible with each other and care about each other.

“Respect each other, rule of law, is what’s shared in Taiwan,” Huang said.

Many Taiwanese commentators also described the incident as the indiscriminate killing of Taiwanese civilians, a result of the ideological war of hate that the CCP has spread around the world.

Taiwanese President Tsai Ing-wen also offered her sincere condolences on Cheng’s death and her hopes for a prompt recovery of those who were injured in the shooting.

“Violence is never the answer,” she posted on Twitter.