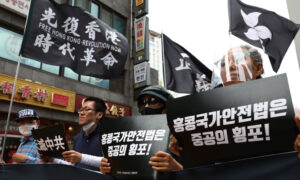 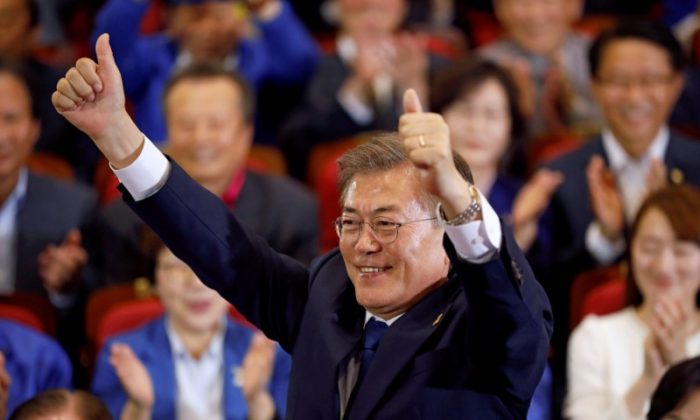 Moon Jae-in, the presidential candidate of the Democratic Party of Korea, poses for photographs as he watches a television report on an exit poll of the presidential election in Seoul, South Korea on May 9, 2017. (REUTERS/Kim Hong-Ji)
Asia & Pacific

Kim was Moon’s trusted aide and spokesperson when he ran for president in 2017. The following year, Kim was elected Governor of South Gyeongsang Province in the 2018 local elections.

The Supreme Court of South Korea sentenced Kim to two years in prison on July 21 and removed him as governor. Kim was suspected of conspiring with power blogger “Druking.”

From November 2016, Kim and Druking allegedly used computer programs to “tamper with 1,180,800 online comments” by methodically “sending more than 88.4 million signals” in 2017 to affect the popularity rating of presidential contenders in polls to help Moon get elected, according to the court’s decision. After that, Kim allegedly used similar methods in the 2018 local elections and was elected governor of South Gyeongsang Province.

In addition, Kim was also suspected of violating election laws by promising to provide the post of South Korean Consulate General in Sendai, Japan, to Druking’s acquaintance in return for helping him win the 2018 local elections. However, Kim was not convicted of this charge in the final verdict.

After Kim’s guilty verdict, the conservative camp in South Korea expressed its belief that this impacts the legitimacy of the Moon Jae-in government.

Yoon Seok-youl, a popular 2022 presidential candidate of the opposition party and former Prosecutor General, said, that judgment of the Ministry of Justice confirms the “fundamental problems with the legitimacy of the sitting power,” reported Chinese.joins.com.

Ahn Cheol-soo, leader of the People Party and a presidential candidate in 2017, who once had an approval rating close to Moon’s before the election, asked President Moon to personally “apologize for this heinous crime.”

However, the current ruling party, the Democratic Party, rejected the argument about the legitimacy of its government, stating that “the president is not directly related to this case.”

Lee Nak-yon, the 2022 presidential candidate of the Democratic Party and a former prime minister, also stated, “In the 2017 presidential election, Moon was already a winner. His campaign had neither the reason to use this illegal act to obtain votes nor was it relevant.”

At present, the Blue House, the executive office of the South Korean President, has stated that it “will not comment [on this matter].”