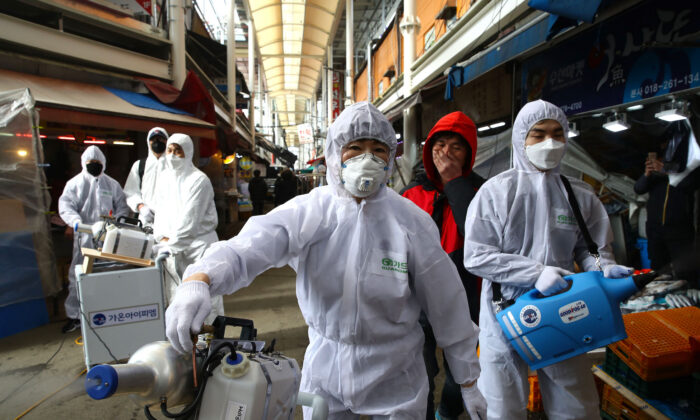 South Korean authorities are now grappling with a surge in CCP virus cases less than a month after relaxing pandemic restrictions, with a record-high 3,292 new infections and 506 severe cases as of Nov. 18, according to the data released by the government.

This is despite more than 78.5 percent of its people having been fully vaccinated, including 90.7 percent who are aged 18 and above, the Korea Disease Control and Prevention Agency’s (KDCA) figures show.

However, officials said the surge in CCP virus cases had been anticipated after more social distancing measures were lifted on Nov. 1, following the country’s success in vaccinating almost 80 percent of its 52 million residents.

The Ministry of Health and Welfare’s spokesman, Son Young-Rae, said at a press briefing in Seoul on Nov. 17 that it will be unnecessary for the country to go back to the stricter regulations, as the increase in cases are “within the boundaries of what we expected.”

Breakthrough and severe cases have been concentrated among the elderly, who were among the first in the country to get vaccinated, necessitating the need to accelerate booster doses, Son said.

“The waning effect [of the vaccine’s efficacy] came more quickly than we anticipated,” he said.

Researchers also found that while fully vaccinated individuals recovered more quickly than the unvaccinated, their peak viral load was comparable to that of unvaccinated persons, allowing them to easily spread the virus to others.

A study led by Imperial College London and the UK Health Security Agency published in The Lancet on Oct. 29 found that vaccinated populations are still susceptible to the Delta variant and can easily pass on COVID-19 within households.

Dr. Anika Singanayagam, a co-lead author of the study, said in a statement that the findings provided important insights into “why the Delta variant is continuing to cause high COVID-19 case numbers” even in countries with high immunization rates.

Meanwhile, the KDCA said it has decided to shorten the dosing interval for booster shots from six months to four months for people aged 60 or older, as well as those who live or work at nursing homes and other vulnerable facilities.

Individuals in their 50s and workers such as police, firefighters, and soldiers can get another booster shot five months after their last dose.

Officials have also expressed concern about the country’s hospital capacity amid the increase in severe COVID-19 cases, as only about 30 percent of intensive care units (ICU) are left available as of Nov. 17.

Following that, the KDCA stated that it would consider issuing a circuit breaker on the relaxed distancing curbs if more than 75 percent of ICU beds are used nationwide, or if other factors pose high risks.