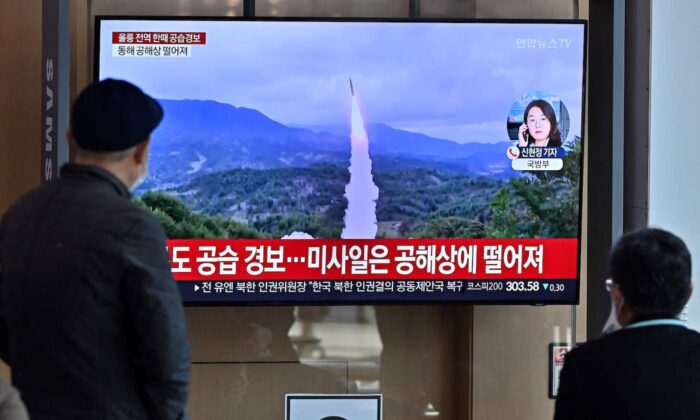 People watch a television screen showing a news broadcast with file footage of a North Korean missile test, at a railway station in Seoul on Nov. 2, 2022. (Jung Yeon-je/AFP via Getty Images)
By Aldgra Fredly

South Korea’s military said Wednesday that North Korea had fired at least 10 missiles into the sea, one of which landed close to its maritime border, prompting an evacuation warning for a South Korean island, and subsequent missiles from Seoul.

South Korea’s Joint Chiefs of Staff (JCS) said the missiles were fired from the North Korean coastal city of Wonsan at around 8.51 a.m. (local time), and one of them crossed the Northern Limit Line (NLL), Yonhap News Agency reported.

The NLL is the de facto sea border as drawn by the United Nations Command at the end of the 1950-53 Korean War.

The JCS said the missile landed 26 kilometers (16 miles) south of the NLL, 57 kilometers (35 miles) east of the South Korean city of Sokcho, and 167 kilometers (103 miles) northwest of Ulleung Island.

The JCS said that North Korea’s missile launches were “intolerable” as a missile landed near South Korea’s territorial waters of the NLL for the first time. It vowed to “respond firmly.”

Yoon furthermore called on the South Korean military to maintain full preparedness for “the possibility of additional and high-intensity provocations by North Korea,” according to local reports.

North Korea, just hours before firing its missiles, had warned that the United States and South Korea would pay “the most horrible price in history” if the two allied nations used military force against it.

Pak Jong Chon, secretary of the ruling Workers’ Party, denounced the U.S. and South Korean joint air drills as “aggressive and provocative” due to the number of fighters involved, the state-run Korean Central News Agency reported.

“If the U.S. and South Korea attempt to use armed forces against the DPRK without any fear, the special means of the DPRK’s armed forces will carry out their strategic missile without delay and the U.S. and South Korea will have to face a terrible case and pay the most horrible price in history,” he said, using North Korea’s official name, Democratic People’s Republic of Korea (DPRK).

The United States and South Korea began their joint air drills, known as Vigilant Storm, on Oct. 31. The drills will last until Nov. 4 and involve 240 aircraft from both sides, and an air refueling tanker from the Australian Air Force.

North Korea denounced the joint drills as an “invasion rehearsal” and fired hundreds of shells in inter-Korean maritime buffer zones that had been established by the two sides in 2018.

The North Korean Foreign Ministry on Monday issued a statement vowing to take “powerful follow-up measures” if the U.S. continues its “military provocations.”

“If the U.S. does not want to see any serious developments which go against its security interests, it should stop the useless and ineffective war exercises all at once. If it failed to do so, it should be held totally responsible for all the consequences arising therefrom,” it stated.