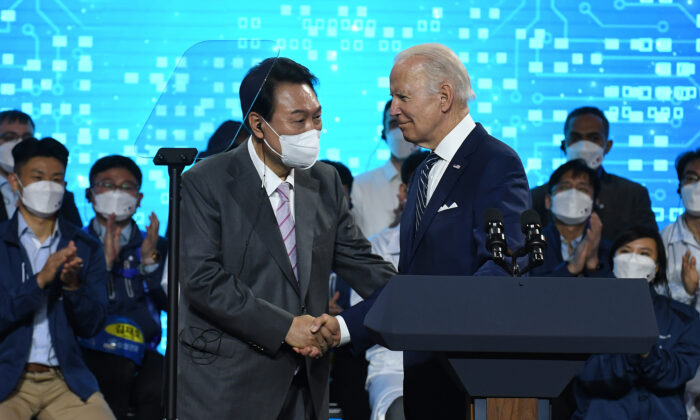 South Korea once again faces a significant strategic dilemma amid growing calls to participate in the U.S.-led chip alliance designed to decouple countries from China. The semiconductor powerhouse was asked to make a decision by the end of August.

The United States has reportedly asked South Korea to inform it whether it will join the “Chip 4 alliance” by Aug. 31, according to local South Korean reports citing unnamed sources in Washington.

Despite mounting pressure from China, its biggest trading partner, South Korean experts and public opinion say the country is likely to participate in the proposed chip alliance.

Taiwan and Japan have already agreed to participate in the Chip 4 alliance proposed by the United States this March, pending South Korea’s decision to join.

The U.S.-led alliance aims to strengthen cooperation in semiconductors among the United States and East Asian powerhouses Taiwan, South Korea, and Japan to build a secure supply chain that excludes China.

“The United States is leading the equipment and software segments of the industry, Taiwan is the very foundry leader, Japan is taking the lead on the component and material sides, and South Korea cannot produce chips without them,” a South Korean expert told Business Korea in a July 15th report.

“What the South Korean government needs to do is to minimize potential damage to South Korean companies by pursuing pragmatism between the United States and China.”

“South Korea will join the alliance because receiving U.S. support is very important in terms of building a high-level chip ecosystem from wafer fabrication to software and semiconductor equipment,” The Korea Times cited Kim Yang-paeng, a researcher at the Korea Institute for Industrial Economics and Trade.

“As seen in Washington’s imposition of sanctions on Huawei, it’s very possible for the United States to grant access for the use of U.S. technologies exclusively to its allies,” Kim added.

Unlike Japan and Taiwan, South Korea still has China as its biggest trading partner. South Korean exports to China accounted for 25.3 percent of its exports through 2021, about 10 percent higher than to the United States, according to The Korea Herald.

Seeing that Beijing views democratically governed Taiwan as a breakaway state from mainland China that should be taken back by force, if necessary, South Korea has also suffered a long economic retaliation from China for deploying the THAAD anti-missile system.

Terminal High Altitude Area Defense (THAAD) is a U.S.-designed and manufactured anti-missile system that was installed in South Korea, between 2016 and 2017, in order to defend against North Korea’s missile build-up. However, Beijing has insisted that the deployment of THAAD affects China’s security and has since adopted a series of countermeasures against South Korea.

The South Korean government appears to be carefully considering whether to participate in the chip alliance.

On July 14, when asked about the country’s stance toward the proposed chip alliance, a spokesperson for newly inaugurated President Yoon Suk-yeol told reporters that “there is nothing to say at this point about the matter,” adding it is “mulling options to strengthen semiconductor cooperation with the United States through various channels.”

U.S. Efforts to Decouple from China

The Biden White House and U.S. Congress have continued the Trump administration’s efforts to bolster the U.S. competitiveness of semiconductor chips.

On Tuesday, the U.S. Senate voted by a wide margin to move ahead on legislation providing more than $52 billion in grants and incentives for its domestic semiconductor industry, advancing a package designed to boost U.S. semiconductor competition with China.

As part of the economic partnership, South Korea also formally announced participation in the U.S.-led Indo-Pacific Economic Framework (IPEF), a framework outlining the United States’ key priorities to align with allies and partners to compete more effectively with China in the race to lead global technology development and norms.

Europe as an Alternative to China

In a push for a new global partnership, Yoon attended the NATO summit last week in Spain to foster economic and security collaboration with NATO members.

In addition to strengthening political and military ties with NATO, the Yoon administration also held bilateral summits with 10 European countries to discuss partnerships in several key industries, such as nuclear and military technology, semiconductors, and renewable energy.

The South Korean president seeks to secure semiconductor supply chains, expand cooperation in nuclear energy and defense, and expand partnerships in the space industry in multiple bilateral meetings on the sidelines with the Netherlands, Poland, and France, respectively, according to Yonhap News Agency.

The administration states that the purpose of increasing bilateral partnerships with European countries is for the Korean economy to become less reliant on China.

Choi Sang-mok, South Korea’s senior presidential secretary for economic affairs, stated that the Yoon administration seeks alternative trading partners to ensure survival, as the declining economy of China has made the country a less reliable trading partner for South Korea, according to The Korea Times.

“The era of an export boom with China we have been enjoying for the past 20 years is seeing its end. That is why we need to find alternative markets and diversify our trade partners,” said Choi at a press briefing in Madrid, Spain, on June 28.