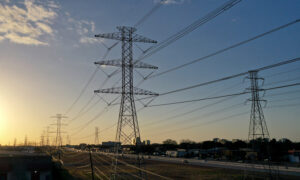 ORLANDO, Fla.—South Dakota Gov. Kristi Noem told the audience at an annual conservative conference on Feb. 27 that lockdowns and other restrictions imposed by state and local governments were to blame for the economic crash in 2020, and not the pandemic which the constraints were intended to snuff out.

“Just as quickly, government turned around and held itself out as the savior, and frankly, the Treasury Department can’t print money fast enough to keep up with Congress’s wishes. But not everyone has followed this path.”

Noem has become the target of establishment media and Democratic politicians for her approach to the pandemic. South Dakota was the only state that never ordered any businesses or churches to close, never imposed a lockdown or a mask mandate, and refrained from classifying businesses into essential and nonessential categories.

Noem is among a few governors, including Florida Gov. Ron DeSantis, who have bucked the national and global trend of imposing strict lockdowns on the populace in an attempt to limit the spread of the CCP (Chinese Communist Party) virus, which causes the disease COVID-19.

The lockdowns resulted in an economic disaster, paring the gains made during the Trump administration.

There is no historical precedent or controlled trials to support the argument for widespread lockdowns, and arguments over their efficacy have largely been split along political lines. Former President Donald Trump repeatedly accused Democrat governors and mayors of using the lockdowns to snuff out the economic boom set in motion by his low-tax, deregulation agenda.

Noem said that Dr. Anthony Fauci, director of the National Institute of Allergy and Infectious Diseases and one of the lead members of Trump’s White House Coronavirus Task Force, told her that South Dakota’s hospitals would be treating 10,000 patients at the worst point of the pandemic. She said the number was actually 600 patients at its worst.

“I don’t know if you agree with me, but Dr. Fauci is wrong a lot,” Noem said, drawing raucous cheers from the crowd.

“Even in a pandemic, public health policy needs to take into account people’s economic and social well-being,” she said. “People need to keep a roof over their heads, they need to feed their families, and they need their dignity.

“In my administration, we resisted the call for virus control at the expense of everything else. We looked at the science, the data, and the facts, and then we took a balanced approach.”

Noem said that as a result, South Dakota now has the lowest unemployment rate in the nation and that the state’s economy is booming.

Despite sidestepping lockdowns, South Dakota had fewer COVID-19 cases per million people over the past 30 days than some of the biggest lockdown states, including California, New York, New Jersey, and Pennsylvania.