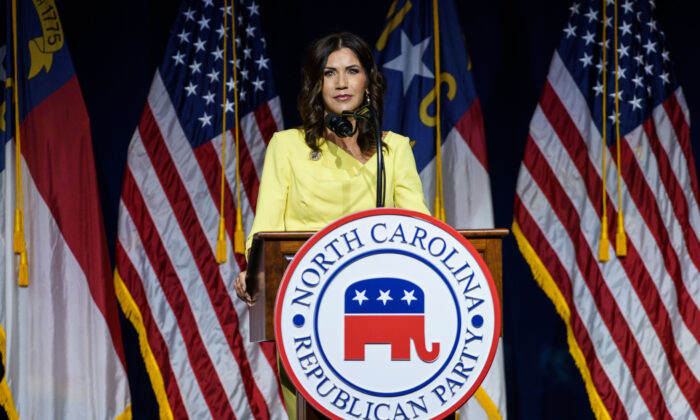 “South Dakota will have no part in the intelligence gathering operations of nations who hate us,” Noem said in the statement. “The Chinese Communist Party uses information that it gathers on TikTok to manipulate the American people, and they gather data off the devices that access the platform.”

An October report revealed that TikTok approved 90 percent of political advertisements containing false and misleading information about the 2022 midterm elections.

The order goes into effect immediately, applying to government employees, agencies, and contractors, who will no longer be able to download the app or access it via a web browser on state-owned or state-leased electronic devices capable of connecting to the internet.

“Because of our serious duty to protect the private data of South Dakota citizens, we must take this action immediately,” Noem said. “I hope other states will follow South Dakota’s lead, and Congress should take broader action, as well.”

Representatives for ByteDance, TikTok’s Beijing-based parent company, didn’t respond to a request by The Epoch Times for comment by press time.

We will have no part in intelligence gathering for China, a nation that hates America. I hope other states quickly follow this example and protect the vital private information of our citizens. pic.twitter.com/rJ2H2k0Rlk

With more than 1 billion active users globally, TikTok counts the United States as its largest market. It stores all U.S. user data on Oracle data servers within the country, with backups in its own data centers in Virginia and Singapore.

The company has repeatedly stated that it allows certain employees outside the United States, including some in China, to have restricted access to TikTok’s U.S. user data “on an as-needed basis” because of their specific roles.

However, a June report by BuzzFeed unveiled leaked audio from 80 internal meetings at TikTok, revealing that U.S. engineers had to rely on their China-based colleagues “to determine how U.S. user data was flowing.”

The media outlet alleged that one Beijing-based engineer “has access to everything,” citing a September 2021 meeting, while a TikTok executive testified before a Senate panel last year that a “world-renowned” U.S.-based security team decides who can access user data from China.

Michael Beckerman, TikTok’s head of public policy for the Americas, declared last October that the company doesn’t “share information with the Chinese government.”

In a Nov. 10 statement, Sens. Marco Rubio (R-Fla.) and Mike Gallagher (R-Wis.) said the video-sharing platform is a “major threat to national security.” Both lawmakers introduced legislation prohibiting China-controlled social media companies, including TikTok, from operating in the United States.