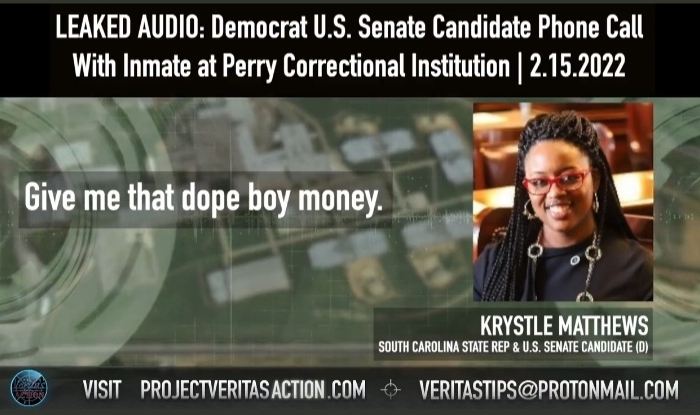 A South Carolina state lawmaker who was on the June 28 ballot in the Democratic U.S. Senate primary runoff has been heard in leaked audio strategizing on how to utilize Democratic “sleepers” to run as Republicans in local elections, as well as requesting drug money from a state prison inmate.

Project Veritas, the watchdog organization that obtained the recording, confirmed to The Epoch Times that it verified state Rep. Krystle Matthews was the person speaking with Perry Correctional Institution inmate David Solomon Ballard.

“When we get enough of us in there, we can wreak havoc for real from the inside out,” Matthews is heard saying in the recording, dated Feb. 15.

It’s unclear what the relationship is between Matthews and Ballard, who in 2018 began a four-year sentence for threatening the life and family of a public official, and a 10-year sentence for resisting arrest and assaulting an officer, with multiple disciplinary actions taken against him since his incarceration. He also has an extensive arrest record.

Ballard had been jailed for threatening the life of Aiken County Sheriff Mike Hunt and his family, according to The State.

While in custody at the Aiken County Department of Public Safety, Ballard then assaulted a State Law Enforcement Division agent.

Matthews was elected to state office in 2018 as a representative of District 117.

“We need people to run as Republicans in these local elections.”

After discussing how sleepers could “change the dynamics in South Carolina,” Matthews goes on to complain about raising money for her campaign, saying she doesn’t care if she obtains “dope money.”

“Gimmie that dope boy money,” Matthews says, before telling Ballard to find her someone from his family to donate money to her campaign in their name.

Matthews then alluded to types “of black people.”

“I don’t recognize these black people,” Matthews said, and referred to herself as “a [racial slur] at heart.”

Matthews also said there needs to be people who can take yard signs down at night while people are sleeping.

Matthews didn’t respond to a request by The Epoch Times for comment.