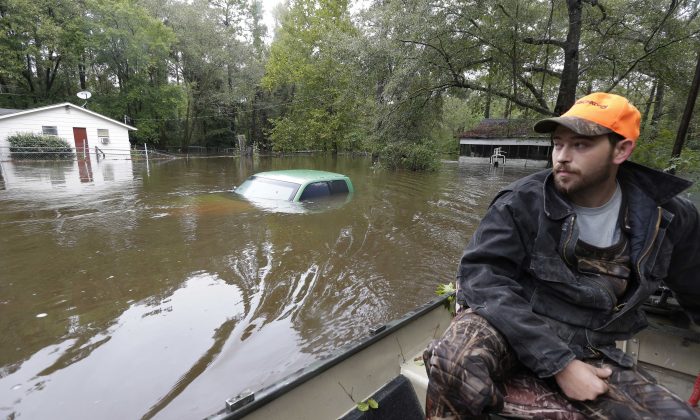 Week of Rainfall Kills at Least 12 People in South Carolina

COLUMBIA, S.C.—People across South Carolina got an object lesson Monday in how you can dodge a hurricane and still get hammered.

Authorities struggled to get water to communities swamped by it, and with waterlogged dams overflowing, bridges collapsing, hundreds of roads inundated, and floodwaters rolling down to the coast, the state was anything but done with this disaster.

“This is a Hugo-level event,” said Maj. Gen. Robert Livingston, head of the South Carolina National Guard, referring to the September 1989 hurricane that devastated Charleston. “We didn’t see this level of erosion in Hugo. … This water doesn’t fool around.”

Much-feared Hurricane Joaquin missed the East Coast, but fueled what experts at the National Oceanic and Atmospheric Administration called a “fire hose” of tropical moisture that aimed directly at the state. A solid week of rainfall killed at least 12 people, sent about 1,000 to shelters, and left about 40,000 without drinkable water.

One of the latest to die was McArthur Woods, 56, who drove around a barricade and drowned Sunday night. His passenger managed to climb on top of the sedan, which stalled in the rushing water. A firefighter rescued her after someone heard her screams.

“She came out the window. How she got on top of the car and stayed there like she did with that water— there’s a good Lord,” Kershaw County Coroner David West said.

By Monday, the heaviest rains had moved into the mid-Atlantic states. Along the Jersey Shore, some beaches devastated by Superstorm Sandy three years ago lost most of their sand to the wind, rain, and high surf.

South Carolina authorities mostly switched Monday from search and rescue into “assessment and recovery mode,” but Gov. Nikki Haley warned citizens to remain careful as a “wave” of water swelled downstream and dams had to be opened to prevent catastrophic failures above low-lying neighborhoods near the capital.

The 16.6 inches of rain that fell at Gills Creek near downtown Columbia on Sunday made for one of the rainiest days recorded at a U.S. weather station in more than 16 years.

“South Carolina has gone through a storm of historic proportions,” Haley said. “Just because the rain stops, does not mean that we are out of the woods.”

Indeed, shortly after the governor’s news conference, authorities evacuated an area on the northeast side of Columbia after a dam on Rockyford Lake burst around 2 p.m. on Monday.

James Shirer lives in the area and said he saw the dam fail and a 22-acre lake drain in 10 to 15 minutes.

“It just poured out,” Shirer said.

The 16.6 inches of rain that fell at Gills Creek near downtown Columbia on Sunday made for one of the rainiest days recorded at a U.S. weather station in more than 16 years.

An Associated Press reporter surveying the scene by helicopter saw the entire eastern side of the capital city awash in floodwater. Neither trailer parks nor upscale neighborhoods were spared: One mansion’s swimming pool was filled with a yellowish broth.

South Carolina is accustomed to water, but not like this.

The state hosts 30,000 miles of rivers and streams that mostly run from the Appalachians to the sea, according to the U.S. Environmental Protection Agency. It also has another 24,000 miles of “perennial waterways”—streams that are usually dry but can turn deadly in flash floods. Now swollen by a week of rain, they have carved new channels through an aging infrastructure.

According to the American Society of Civil Engineers, 1,048 of the 9,275 bridges were structurally deficient before this storm. Some 550 roads and bridges remained closed on Monday, including nearly 75 miles of Interstate 95. The governor said they will need close inspection to ensure they’re safe.

Some towns were entirely cut off. About 60 miles southeast of the capital, all four roads leading into the county seat of Manning were closed, isolating 4,000 people. Many smaller communities in Clarendon County are in a similar predicament, Sheriff Randy Garrett said.

“I’m the sheriff of a bunch of islands,” Garrett said.

The National Guard’s Blackhawk helicopters were the best—and only—way to reach some places, and authorities were just starting to identify “vulnerable areas that may not be completely obvious,” said Livingston, a two-star general.

The Blackhawk crew including Chief Warrant Officer 2 Antonio Montgomery finished its rescue training just in time for the storm, and quickly put it to use.

Some people waved towels at them, begging for rescues. Neighbors would then step out onto their porches, too, asking to be lifted to safety.

Montgomery, 34, served in Iraq 10 years ago, but there is something different about helping a place where his crew has lived, he said. “It’s our home. We’ve all had friends and families who have lost things.”

At a Red Cross shelter in Rowesville, Nyshambi Vega, of Holly Hill, about 50 miles northwest of Charleston, settled onto a cot with her boys—ages 2, 1, and 5 months—and hoped for the best.

Like most of her neighbors in her public housing complex, the 24-year-old mother had hoped to ride out the storm. Then the water reached her front door, and the toilet backed up. They were rescued Sunday morning by firefighters who walked small boats through the parking lot.

Along with her boys, all she managed to carry with her was a bag stuffed with diapers and baby formula. The water came up to her chest, and she struggled to hold the baby over her head as she waded to the boat.

“His feet were dipping into the water as we tried to get into the boat, so it was scary and dangerous,” Vega said Monday as the infant snoozed, content, in her lap.

Most of her neighbors got out with nothing but the clothes they were wearing, she said, “And the clothes we had on our backs were wet.”

Safe water, however, was in short supply: In Columbia, officials brought in bottled water and portable restrooms for the 31,000 students at the University of South Carolina, and firefighters used a half-dozen trucks and pumps to ferry hundreds of thousands of gallons of water to Palmetto Health Baptist Hospital.

“He was extremely gracious and kind,” she said.

Bett Williams’s family has lived below Rockyford Lake for nearly a half century; she said she had never seen flooding there before. But on Monday, she had only a few moments before fleeing with her 12-year-old daughter and 9-year-old son to a shelter at the nearby AC Flora High School.

“We grabbed our cellphone chargers and the dog,” she said. “We still hope and pray it will be OK.”