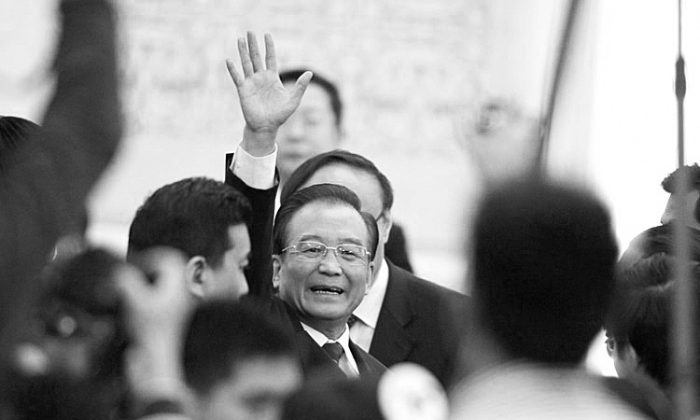 Chinese Premier Wen Jiabao waves to media as leaves after a press conference of the National People's Congress's (NPC) annual session at the Great Hall of the People in Beijing on March 14, 2012. (Liu Jin/AFP/Getty Images)
China

The escape of blind Chinese activist Chen Guangcheng from house arrest may have been assisted by allies of premier Wen Jiabao, according to a high-level source in Beijing.

The source, who is close to senior officials in the capital, told The Epoch Times that the lawyer’s escape was “not only good luck and timing.”

“Wen Jiabao’s men persuaded a few plain clothes policemen who were watching over Chen closely at his residence and successfully turned them around,” the insider said.

The source added that the premier’s men told the guards “the possible time and location of Chen’s escape beforehand.”

It is understood that the intervention came as a result of a long-term disagreement over the handling of the case between China’s top police chief Zhou Yongkang and Wen.

In a recent interview, the source said that the conflict between the two Party officials “has long existed and the explosion now happening was expected.”

The news follows a report earlier this week by Hong Kong Apple Daily, who reported that guards turned a blind eye to Chen’s escape.

In 2006, Chen organized a lawsuit against the authorities of Linyi, Shandong Province, for excessive and violent use of the one child policy, and was sentenced by regional officials to four years and three months of imprisonment.

In July 2008, his wife, Yuan Weijing, published an open letter to president Hu Jintao, calling the head of the Communist Party to “really understand the humiliation and helplessness that I have suffered in my daily life. I hope that our leaders can listen to an imprisoned blind activist’s worries over the country’s path of both success and failure.”

The source revealed that Wen’s immediate response to the letter was to ask regional officials to release the imprisoned Chen. He also claimed that Linyi City’s Political and Legislative Affairs Committee (PLAC)’s handling of the case was inappropriate.

However, Wen was opposed strongly by Zhou Yongkang, head of the PLAC. Zhou emphasized stricter management of similar cases and called for harsher punishment towards “domestic representatives” of “anti-Chinese forces” abroad.

Matters came to a head between Zhou and Wen in December last year when Batman actor Christian Bale was accosted while trying to visit the imprisoned Chen.

The source said that at the time, Wen complained that both the Linyi Party officials and Zhou’s manner of handling the case was problematic.

However, the country’s propaganda chief, Li Changchun, sided with Zhou in the matter and said privately that Wen was “too mindful of other people’s business.”

Five days after the incident with Bale, the Linyi government was awarded the title “National City of Civilization” by Li’s department, the Central Guidance Commission for Building Spiritual Civilization.