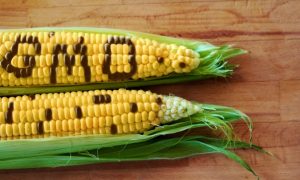 Sorry, Corn-on-the Cob Is GMO Too

Many of us thought we were safe from GMO corn if we meticulously read labels for field corn ingredients, bought all organic, and eschewed processed corn products in favor of summer-fresh ears from our local markets and farm stands.

And until 2012, we were safe from GMOs if we ate fresh, frozen, and canned sweet corn.

But then unbeknownst to many, GMO sweet corn quietly crept onto supermarket shelves.

And yes, it is the doing of biotech giant Monsanto. Monsanto released the first GMO sweet corn onto the market for the 2012 growing season. This corn does double the work, able to resist heavy-duty herbicides and poisonous insects.

According to the Non GMO Project:

“Monsanto’s GMO sweet corn is bred to resist Monsanto’s own Roundup herbicide and to produce its own insecticide. Bt toxin, the regulated insecticide that is produced systemically throughout the corn plant, ensures that if an insect consumes any part of the plant it dies.”

The way Monsanto puts it sounds much more appealing:

“When built into the plant, the Bt protein provides protection from certain sweet corn insect pests, allowing farmers to decrease insecticide (pesticide) applications by as much as 85 percent. With fewer tractor trips across their fields to apply insecticide, farmers also reduce their use of fossil fuels.”

Besides the United States, GMO sweet corn is grown in Canada, although it’s not clear how far it has penetrated into the U.S. market.

In 2013, the non-profit Friends of the Earth, tested 71 samples of sweet corn in eight areas around the United States and found only two samples that contained GMO material.

DNA From GMOs Can Pass Directly Into Humans

The Real Definition of GMO Will Surprise You

One sample came from a store in Colorado, although corn from other stores in the state were GMO free. The other sample with GMO material was found at a Stop & Shop in Everett, Mass., and Friends of the Earth traced this corn to Ontario, Canada.

The study did not find GMO sweet corn in stores in “Washington State, California, Illinois, Vermont, Washington, D.C., or Oregon, or in other stores in Colorado or Massachusetts,” according to the report.

Of course, this is likely to change so here are the two best things you can do to avoid as much GM sweet corn as possible.

Eat All Organic and Verified

Products that are labeled 100 percent Organic, Certified Organic, and USDA Organic are by law, not allowed to contain GMOs—mostly.

There is a loophole, which allows food makers to use non-organic cornstarch and soy lecithin in food labeled organic. Soy and cornstarch are two of the most common GMO crops.

There are at least three non-GMO ‘verified’ labels, which can be seen on products available in many health food stores.

However, as the blog GMO Awareness points out, you may need to bring your reading glasses to the store because:

“Some manufacturers don’t include a little GMO-free icon, but they do include the words ‘we don’t use genetically engineered ingredients’ (or similar wording) on the back of their labeling.”

If you don’t eat foods made with cornstarch and soy lecithin you’re safer. If you’re serious about avoiding GMO material, eating unprocessed foods as much as possible is a good idea.

Buying local foods from farmers you trust is also a good way to go and while there is always a risk of contamination through cross pollination with GMO corn, you can talk to the farmer about what they’ve done to mitigate the risks of contamination.

There are still many small famers out there who take pride in their heirloom sweet corns, and growing food that they believe will nourish their families for generations, so seek them out and support them.

*Image of sweet corn via Shutterstock