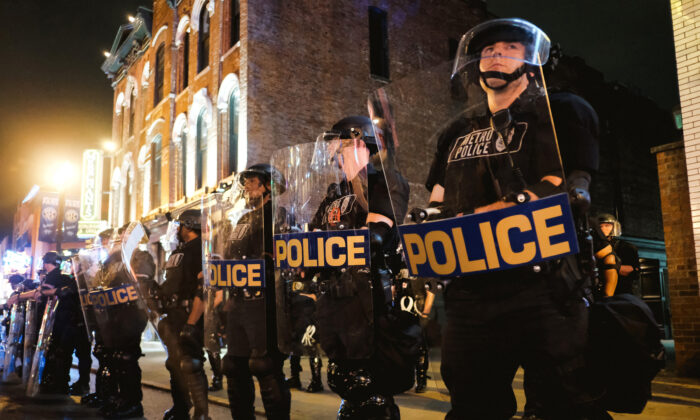 Police are seen downtown on Broadway during a protest in Nashville, Tenn., on June 4, 2020. Jason Kempin/Getty Images)
Viewpoints

Obviously, a multitude of factors are at play, but if you had to pick one man who’s most responsible for the massive increase in crime of all sorts in U.S. cities over the past few years, from pervasive looting to assault (sexual or otherwise) to murder, it would be billionaire investor George Soros.

Through his Open Society Foundations—described as “the world’s largest private funder of independent groups working for justice, democratic governance, and human rights”—as well as various other entities, sub-entities, and cutouts, Soros has financed the political campaigns of numerous district attorneys (DA) and attorneys general (AG) across the country.

All of them were leftists, working from a principle of minimal—if any—incarceration or bail in any but the most extreme situations. The perpetrator, most probably, they assume, is the product of a miserable childhood, and is therefore worthy of more sympathy than the victim. That many who had equally miserable childhoods are still able to function as law-abiding adults is evidently of little consequence to these DAs and AGs.

I’m not going to waste time explaining the neurotic impulses I believe motivate their views, because the result is what’s important. And that has been a horrendous increase in crime, particularly in the very minority communities these DAs and AGs like to tell themselves they’re helping.

Disrespect for the law has made many of our cities unlivable. Who would want to be a young black kid growing up in Chicago?

Thankfully, many citizens are becoming disturbed by this, resulting in recall elections for district attorneys Chesa Boudin in San Francisco and George Gascón in Los Angeles. (Gascón has recently given tips on how to avoid auto thieves amid the crime wave in his city.)

In obvious electoral danger, the Democrats in general are finally starting to get the message, with most (including the occupant of the White House) now reversing field on their ludicrous call to defund the police.

But the ideas behind this haven’t disappeared. They’ve just gone underground—and not all that deeply underground, either. Some are hiding in plain view on websites.

We’re seeing this play out currently in our district attorney race here in Nashville, Tennessee, something that’s probably occurring elsewhere in the country—or will be shortly.

Nashville—which, inexplicably, has a practically unheard-of eight-year term for district attorney (who thought that up?)—has been having crime problems of its own, with an escalating murder rate. This is a tourist city, so that should be of great concern. Folks don’t want to come unless they feel safe.

The incumbent DA is Glenn Funk, pretty much a standard-form liberal who’s often at odds with Tennessee Gov. Bill Lee, a Republican, specifically on abortion, but also to some degree on COVID-19. (Nashville is blue and Tennessee red, roughly by equal two-thirds amounts.)

Also inexplicably, given the growing national and local concern about crime, the Republicans don’t have a candidate in the Nashville DA race. To say the Davidson County (contiguous with Nashville) Republican Party was asleep at the proverbial wheel about this is an understatement. These days, district attorneys are arguably more important to the welfare of cities than mayors—especially when with DA’s have eight years in office!

But there are other candidates besides Funk.

They are Sara Beth Myers and P. Danielle Nellis, both women.

I’m most concerned here with Myers—a graduate of Harvard College and Vanderbilt Law School. It’s because of her campaign that I caught the whiff of Soros and a new trend.

Hunting for votes, she recently misrepresented herself as a moderate at two Republican gatherings, when she’s anything but. Although she was exposed at one of them and slipped away from the event in embarrassment, I’m afraid this form of masquerade is going to be pro forma in the future.

One of those gatherings was the monthly meeting of First Tuesday—a Metro Nashville Republican event that saw its leader recently die. Perhaps that was why Myers was able to present her lies there unscathed.

It was at the monthly luncheon of the Nashville Republican Women, the oldest such organization hereabouts, that she was unmasked and left.

Here’s the real Sara Beth Myers from her own campaign website and from the website for AWAKE (yes, that’s the name), the organization she founded in 2013.

Myers introduces herself thusly at the top of her campaign website:

“Sara Beth has been fighting for victims of racial and domestic violence, as well as prosecuting public officials, law enforcement officers, and private citizens when they violate people’s civil rights for 10 years. … Sara Beth has demonstrated her ability to put progressive ideas into action.”

From the AWAKE website, we learn a lot from the “Bills We Oppose”:

Use of Student’s Preferred Pronouns: Legislation that would protect teachers from being sued for calling a student by his or her biological sex—they’re against that!

Transgender Youth Participation in Sports: They’re against a measure that requires the withholding of funds to a local education agency if that agency determines school sports participation by a students’ biological sex. In other words, they’re fine with transgender athletes such as swimmer Lia Thomas destroying women’s sports. (Whatever happened to feminism—just asking?)

Denial of Education to Undocumented Students: They oppose legislation that allows local education agencies to determine for themselves whether illegal aliens—let’s use the real term—can attend local schools.

It goes on, straight out of the progressive playbook, all from the foundation founded by the putative “moderate” Myers.

Myers is a stone progressive. If she were willing to campaign that way, it wouldn’t be so bad. She’s as entitled to her opinions as we are to judge them. It’s the dishonesty that should scare us. It’s designed to subvert the will of the people who, by large margins in most cases, disagree with those ideas.

As for the Nashville DA election, which takes place on May 3, most Republicans I’ve spoken with—after they’ve learned of Myers’s prevarications—will be holding their noses and voting for Funk, based on the old principle of the “devil you know.”

Sometime in the next eight years, let’s hope the Republicans can get it together and find a candidate of their own.