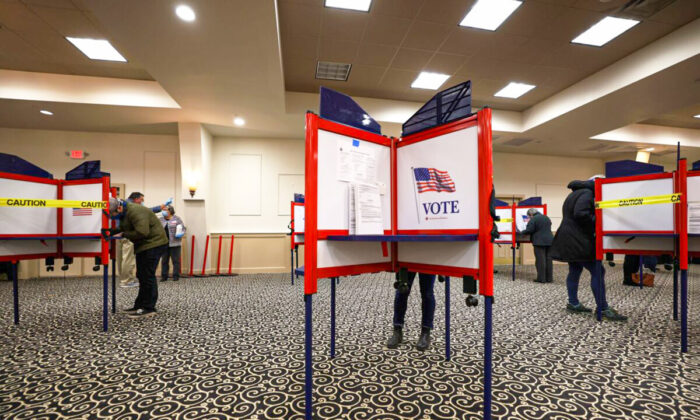 With 94 percent of precincts counted, Sartoris collected 15,209 votes, or 65 percent, to Sahrbeck’s 8,069 votes in the June 14 Democratic primary, according to local radio station WMTM. Since they were the only two candidates seeking the office, Sartoris is expected to be elected as Cumberland County’s district attorney in the November general election.

The billionaire Soros is known for his efforts to bankroll the campaigns of progressive state and local prosecutor candidates across the country.

In the month before the primary, a Soros-backed super-PAC spent nearly $384,000 opposing Sahrbeck and supporting Sartoris, a whopping amount that’s almost five times the combined total spent by both candidates and unheard of in local prosecutor races.

While both candidates are registered Democrats, they hold different views on top priorities.

Sahrbeck, a career prosecutor, said most crimes in the county are fueled by either drug addiction or mental health issues, so he wanted to leverage the criminal justice system in a way to get more people into court-ordered treatment programs, according to a virtual candidate forum hosted by Portland Center for Restorative Justice.

To Sartoris, an environmental-lawyer-turned prosecutor, a district attorney’s top job is to set prosecution policies. Her vision is to reduce jail and prison populations through office-wide policies that set when to charge crimes, what charges to file, and how to resolve the charges, according to the same forum.

“People are mostly unaware that prosecutors have an incredible amount of power in the system. We, in fact, have the greatest power in the criminal justice system,” she said at the forum.

By contrast, Sahrbeck disagrees that the top prosecutor is a “policy position.”

He said prosecutors should judge every case on its own merits (such as the crime committed, the history of the offender, and the victim,) and make a prosecutorial decision that’s best in the interest of justice, which includes the interests of offenders, victims, and the broader community, according to the candidate forum.

Sahrbeck raised $49,177 in his reelection bid, twice as much as Sartoris, according to the campaign finance data published by Maine Ethics Commission.

However, about a month before the primary, the Soros-backed Democracy PAC II poured $300,000 into the newly formed Maine Justice and Public Safety PAC. The latter ended up spending $383,945 on mailers and digital ads opposing Sahrbeck and supporting Sartoris, according to data by Maine Ethics Commission.

Soros is the principal donor to the Democracy PAC II in this election cycle, contributing $125 million, or 99 percent of the total, according to finance data published by Federal Election Commission.

Super PACs such as Maine Justice and Public Safety can raise and spend unlimited money on communications opposing or supporting candidates under the protection of free speech. But they can’t communicate directly with candidates and must follow certain finance disclosure rules.

After Anderson announced her retirement in 2018, Sahrbeck, a Republican-turned-independent candidate at the time, was to face Jon Gale, a Democrat, in the general election.

However, just a week before the election, Gale dropped out of the race over sexual misconduct allegations.

As a result, Sahrbeck was elected with just 26.7 percent of the votes.

Last September, Sahrbeck changed his party registration again, this time to Democrat. He said his record as a district attorney reflects the Democratic values of addressing root causes of crime, according to the candidate forum.

While in office, Sahrbeck created a diversion program, a veterans treatment court, and a community network called the Cumberland County Coalition on Substance Use Prevention.