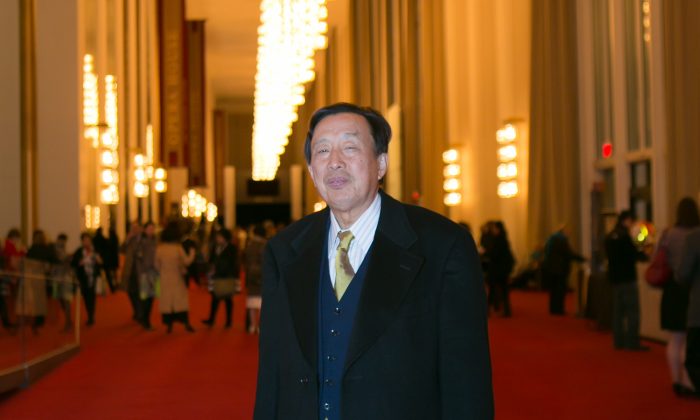 WASHINGTON, D.C.—Famous Chinese dissident Luo Yu was so moved by Shen Yun Performing Arts’ revival of the authentic traditional Chinese culture that he had to see the performance twice.

After a stunning experience with the performance in Philadelphia, Mr. Luo, who is 71, drove two hours to Washington to see New York-based Shen Yun’s opening night performance at the Kennedy Center Opera House on Feb. 16.

Mr. Luo is the son of former revolutionary Chinese general Luo Ruiqing. Luo Ruiqing was one of the most powerful Chinese Communist Party officials, and Mao’s right hand man. Luo Yu held the position of a division commander in the General Staff Department of the People’s Liberation Army when he defected from the Chinese Communist Party soon after the Tiananmen Square massacre in 1989.

During his first experience of Shen Yun, a feeling of deep sincerity stuck with him. He was inspired, energized, and felt a strong need to share Shen Yun with the China of today.

That feeling stuck, but also evolved into something more. Each viewing gave him a different feeling, he said.

Seeing legends of ancient China come to life as well as modern-day stories, Mr. Luo said, “I shed tears many times, [as] my compassion came forth while seeing the struggle between good and evil.” He realized, while watching a scene where the Buddha came down from heaven to help people of faith, that, inexplicably, tears were running down his face.

Ancient China was deeply spiritual, and principles that came from Buddhism, Taoism, and Confucianism had made up the pillars of society. People believed good was rewarded with good, and evil was punished. The ancient Chinese believed in respect for the heavens that had bestowed upon them their divine culture.

This was portrayed in Shen Yun through music and story-based classical Chinese dance, in a variety of manners. One story told the creation myth of China, with divine beings descending to Earth to fulfill their vows. Another showed the beauty of water and sea fairies. A lively Tibetan ethnic dance showed veneration for the divine.

Mr. Luo expressed how much he agreed with the spirituality of the culture he saw in Shen Yun, and said he hoped all of mainland Chinese could see this performance.

China is badly in need of such a performance, he explained, because under modern communist rule, the people have lost a part of their heritage and identity. They have lost their roots.

“Shen Yun expresses the messages of ‘truthfulness, compassion, and forbearance,’ and these [principles] can allow people to be good, which are something badly missing in the world, especially in China. If everyone can follow ‘truthfulness, compassion and forbearance,’ this world, especially China, would be very different,” said Mr. Luo. He added that he hoped Shen Yun could soon perform in China.

The truthfulness, compassion, and forbearance Mr. Luo saw was especially important, he explained. This is how he knew Shen Yun would mean a lot to China. What he saw presented in Shen Yun he thought could teach people to be good again.

“So, a show like Shen Yun, through such artistry, could educate everyone,” he said.