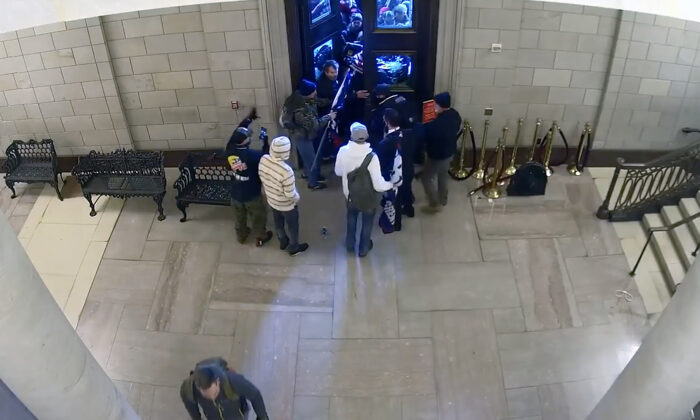 ‘Someone Opened the Doors From the Inside,’ Jan. 6 Defense Attorney Says

Kelly Meggs and other members of the Oath Keepers couldn’t have done one of the major things of which they’re accused by federal prosecutors: forcing their way into the U.S. Capitol Rotunda on Jan. 6, 2021, through the famous Columbus Doors, a defense attorney says.

The two sets of historic doors that lead into the Rotunda were opened by someone on the inside and not his client, according to defense attorney Jonathon Moseley.

Department of Justice video widely circulated on Twitter since last week shows a man trying to open the inner doors by leaning against them, before turning around as if listening to someone, then returning to the entrance and opening the left door for protesters.

The 20,000-pound Columbus Doors that lead into the Rotunda on the east side of the U.S. Capitol are secured by magnetic locks that can only be opened from the inside by using a security code controlled by Capitol Police, Moseley wrote in an eight-page memo.

‘Impossible and Cannot Be Done’

“Imagine how the prosecution will prove at trial what cannot be proven because it is not true,” Moseley wrote to prosecutors Jeffrey S. Nestler and Kathryn Leigh Rakoczy of the U.S. Attorney’s Office for the District of Columbia. “Who is going to testify that the defendants entered the Columbus Doors when the U.S. Capitol Police will begrudgingly testify that that is impossible and cannot be done?”

In a superseding indictment on Jan. 12, Meggs and 10 other members of the Oath Keepers were charged with seditious conspiracy, destruction of government property, obstruction of an official proceeding, civil disorder, tampering with documents, and other counts related to the Jan. 6 Capitol breach.

The indictment charges that Meggs led a “stack formation” up the Capitol steps and to the entrance at the Columbus Doors. At 2:39 p.m., the doors were breached, and stack one entered the Capitol with the mob, according to the indictment.

Moseley said there’s one big problem with that accusation: It’s impossible to force entry from the outside. Only someone with the security code could release the locks—and only from the inside.

Video evidence submitted in the case shows the glass panes in the inner doors were cracked, but intact, so no one accessed the building through the windows or by reaching for the inside door handles, he said.

Video footage shot by multimedia journalist Michael Nigro shows the outer bronze doors were partially retracted before a large crowd gathered outside of the entrance. The inner doors were closed, and U.S. Capitol Police were stationed outside. Protesters sprayed police with pepper spray, threw items at them, and hit them with flagpoles.

A short time later, the inner doors were opened and hundreds of protesters streamed into the Rotunda, the video footage shows. A protester in the Rotunda is heard shouting, “Don’t vandalize the property!”

U.S. sculptor Randolph Rogers designed the solid-bronze doors to depict scenes from the life of explorer Christopher Columbus. The doors were first installed in 1863, moved in 1871 to the central east entrance, and moved to their current location in 1961.

The doors are 17 feet high and weigh 20,000 pounds, according to the Architect of the Capitol. Once opened, the giant doors retract into pockets in the walls via built-in tracks.

Moseley asked federal prosecutors for “any and all specifications, details and operational information about the so-called Columbus Doors.”

He and an assistant took a tour of the Capitol on Jan. 22, along with other attorneys and investigators. The U.S. Capitol Police officers on duty were emphatic that the doors couldn’t be opened from the outside, he said.

“These are facts that in the supposedly largest nationwide investigation in the history of the U.S. since the kidnapping of the Charles Lindbergh baby or the search for Al Capone could easily have been investigated, [checked], and determined before the U.S. Attorney’s Office presented false information to the grand jury,” Moseley wrote.

“For these purposes, I don’t care who opened the Columbus Doors from the inside, or why, or who they worked for. History will reveal all of that. History will care very much. But all I care about is that it wasn’t my client or any of these defendants, and the U.S. Attorney’s Office knows that or should have discovered it upon reasonable investigation.”

The U.S. Attorney’s Office for the District of Columbia didn’t respond to a request for comment on Moseley’s letter by press time.

The superseding indictment states that Meggs and four other Oath Keepers became part of a mob that “aggressively advanced toward the Rotunda Doors, assaulted the law enforcement officers guarding the doors, threw objects and sprayed chemicals toward the officers and the doors and pulled violently on the doors.”

The mob breached the Rotunda entrance at about 2:39 p.m., according to the indictment.

Nigro’s video footage from outside the entrance shows a group of Oath Keepers near the Columbus Doors, which are clearly open at the time the men got near the threshold. By the time they entered the Capitol, dozens if not more than 100 people had flowed into the building, the footage shows.

Moseley accused prosecutors of crafting a “fabricated case” against the Oath Keepers that’s “false and reprehensible.”

Moseley criticized federal authorities for “dishonestly trying to deceive the public” for eight months by concealing the fact that six demonstration permits had been issued for the U.S. Capitol grounds on Jan. 6, 2021. Implicit in those permits is the permission for people to have ingress and egress across the grounds to reach each event, he said.

This baseless prosecution is the greatest threat to the Republic since 1812.
— Jonathon Moseley

Moseley proposed a stipulation that both sides in the case agree that none of the demonstrators or the defendants opened the Columbus Doors on Jan. 6, 2021, and that the government strike three paragraphs of the indictment that refer to the defendants entering the Capitol because they’re “untrue and withdrawn.” Prosecutors refused that proposal, he said.

News of the Columbus Doors issue comes as more video footage released from protective court seal shows large groups of Jan. 6, 2021, protesters peacefully streaming into the U.S. Capitol through wide-open doors. Among them was Rabbi Mike Stepakoff, who spent about five minutes inside the Capitol, doing nothing more than looking around and taking photos.

On his way out, Stepakoff stopped to shake hands with a police officer and “told him ‘thank you for his service, we love you, and God bless you,’” according to his attorney, Marina Medvin.

Stepakoff pleaded guilty to the parading charge and received 12 months of probation. The other charges were dismissed, Medvin said in a statement. The government sought to punish him with a jail term “for events he did not partake in, for destruction and violence he did not witness, for severity he did not experience, and for an effect he did not cause nor could foresee,” she said.