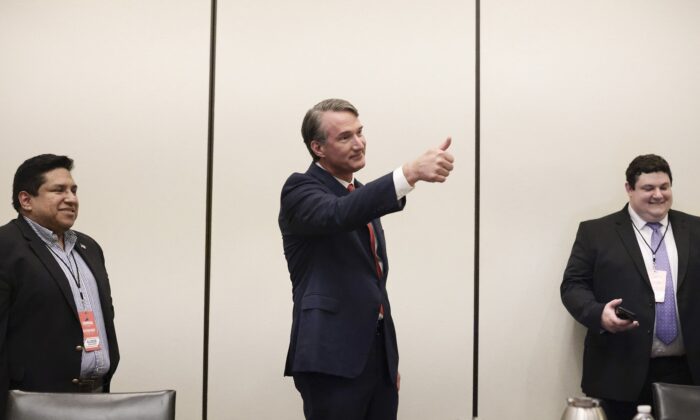 Republican gubernatorial candidate Glenn Youngkin gives a thumbs up after learning that polling numbers indicated that he was ahead in the Virginia gubernatorial race in Chantilly, Va., on Nov. 2, 2021. (Anna Moneymaker/Getty Images)
Viewpoints

Some Thoughts on the Governors’ Races: Round 1 to the Good Guys

To lose the gubernatorial race in blue Virginia, even if it was a squeaker, and have even bluer New Jersey—of all places—be competitive and unresolved on the morning after the election was a clear disaster for the Democratic Party and an augury of an even greater disaster in 2022.

All seemed like last year’s news at best. Time for Obama to go back to one of his multimillion-dollar homes and complain about global warming.

Another big loser was Rep. Alexandria Ocasio-Cortez (D-N.Y.) (and, with her, the Democrats’ “progressive”—should always be in quotes—wing) who got shuffled off in Buffalo for supporting an ultra-leftie police hater who lost to a write-in candidate, again of all things.

Strangely enough, Sen. Joe Manchin (D-W.Va.) may emerge as the new leader of a reviving Democratic Party, if it can shirk its reactionary left wing that seems so ridiculously old-fashioned—without realizing it, of course—in their search for “progressivism.” (There’s nothing so old as the avant-garde, as the expression goes.)

The biggest “atta-girl” of the night goes to Virginia lieutenant governor winner and Marine veteran Winsome Sears who started “USA, USA” cheers during her victory speech. (Maybe this will actually wake up some of the Marine brass that have become so “woke” these days, you want to send them back down the halls of Montezuma, never to return.)

And speaking of Richmond, the greatest lesson for Republicans may have come from the suburbs of that city. Trump had lost them in 2020, as he did many suburbs (putatively).

Indeed, Youngkin outran Trump in nearly every, maybe every, of the 133 Virginia counties.

I hope “45” is paying attention to the details of these results, because many of us are. He should as well. If he doesn’t, it has been widely and correctly acknowledged that Florida Gov. Ron DeSantis would be a more than worthy substitute.

Indeed, in the absence of Trump, DeSantis would be the runaway front-runner for the Republican 2024 nomination at this point.

I write this as an adamant Trump supporter and one who suspects there was substantial evil afoot in the 2020 election—evil that must be fixed for the preservation of our republic.

Still, I am not tired of “winning,” as he says. Trump’s policies won by proxy on Nov. 2, but his, shall we say, occasional excesses and inability to keep quiet when necessary still have a question mark next to them, a vulnerability that, although usually unfair, exists to be exploited.

It’s worth noting that Youngkin didn’t solicit Trump’s support in the way McAuliffe—obviously more desperate, what else did he have—brought in Obama and company.

This even though Trump is now more popular, it would seem, than when he was in office. This isn’t unusual.

In politics, silence is often more powerful than words. Or, as many (Machiavelli, Sun Tzu) have said before, when your opponent is destroying himself, shut up already and let him do it.

Trump should resist the temptation to be always in our eyes and ears. In the case of Biden, he’s fortunate in having one of the most incompetent presidents in American history as a possible adversary. Failing that, he might have the equally incompetent Harris.

It wouldn’t be at all surprising, however, if somebody else emerges as the Democratic candidate in 2024. I imagine this morning many are beginning to think about it. (Pro tip: It won’t be Pete Buttigieg.)

What happens now is not the conventional “anybody’s guess.” The ball game for 2022 and 2024 is the Republicans’ to lose.

Unfortunately, they are capable of it, as they have shown before. The key to success will be vigilance, indeed increased vigilance, on the part of the rank-and-file. Youngkin came out of nowhere, meaning he came from us. That’s to be emulated.

Beware the entrenched, the RINOS, the Lincoln Project, and so forth. We see them everywhere, perhaps even more in red states than in blue, spouting rhetoric they never really intend to fulfill. They are as bad as Obama and Biden, perhaps worse.

We are in an ideological war for America. Round one went to the good guys.