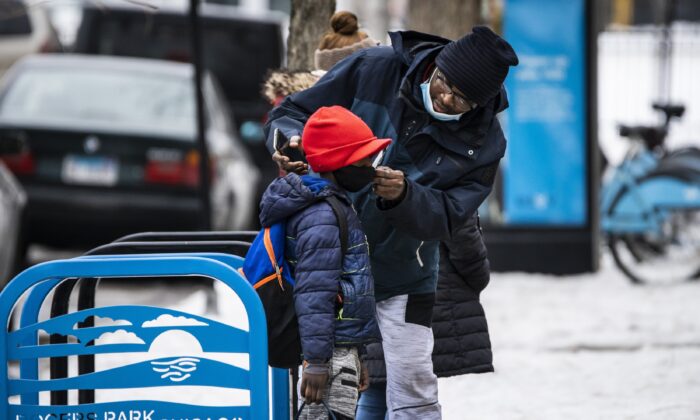 Some Democrat-Run Cities Aim to End Vaccine and Mask Mandates

For example, Chicago’s leadership has signaled that the city’s COVID-19 vaccine passport and mandate may expire as cases have fallen significantly in recent days. Data shows that cases in Cook County, Illinois, which includes Chicago, have dropped by more than 70 percent in the past two weeks.

Chicago Public Health Commissioner Dr. Allison Arwady told reporters on Tuesday that Chicago may lift its vaccine passport requirements for restaurants and bars due to a drop in cases and hospitalizations.

“We’re not going to keep the vaccination requirement just because we like it. We’re keeping it because the risk remains higher at this point,” Arwady said, according to the Sun-Times. “I am feeling confident that it will be able to come off relatively soon, and if we keep seeing a 50% drop week over week, that could be quite soon.”

And in Denver, Colorado, the mayor suggested that the city may allow vaccine passports and indoor mask mandates to expire by the end of this week.

In a Twitter post, Denver Mayor Michael Hancock wrote Monday that “following extensive discussions with our regional partners, as well as current public health [advice] and the downward trajectory of cases, positivity and hospitalizations, the [City of Denver] will not be extending our public health order.”

“Beginning Friday,” the Democrat mayor continued, “people will no longer be required, under a public health order, to wear a mask or show proof of vaccination for entry into a business” in Denver.

Officials in Philadelphia, which has a passport program in effect, have signaled that an end to the mandates is coming.

“If things continue the way they are, we could start to see things getting back to some semblance of normal,” Dr. Chery Bettigole, the city’s health commissioner, told reporters on Wednesday. “If you think about where we are with this particular wave and case rates right now, we’re probably several months away from a place where we will have the kind of safety to drop all the current restrictions.”

It comes as COVID-19 cases have fallen in Denver by nearly 60 percent over the previous two weeks, and they are down even more over the past month, according to tracking data.

However, in New York City, which also has masking and vaccine mandates, it’s not clear when such policies will be rescinded. Officials in New York City, including new Democrat Mayor Eric Adams, have shown few signs of backing down from the so-called Key to NYC program that essentially serves as a vaccine passport to enter restaurants, gyms, bars, sporting venues, and other places.

“Let’s do away with blanket COVID masking policies—they don’t make a difference when they’re not consistently followed or enforced. We need to trust the public to make the best personal decisions for themselves based on their unique risks and circumstances,” she said in a statement.

Outside the United States, a growing number of European countries and Israel have started to remove COVID-19-related restrictions, including vaccine passes and mask mandates.

A recent poll from Monmouth University found that about 70 percent of U.S. respondents agree that “it’s time we accept that COVID is here to stay and we just need to get on with our lives.”