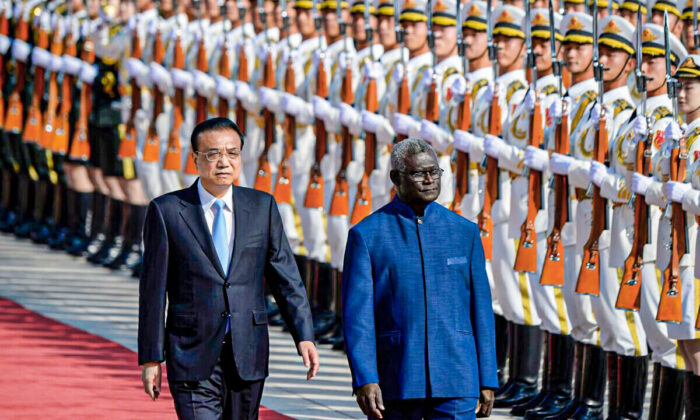 Solomon Islands Playing US, China Off Against Each Other: Diplomacy Expert

The contentious security deal between the Solomon Islands and Beijing is a sign that the Pacific nation is exploiting “Great Power” competition between China and democratic allies in the region, according to a diplomacy expert.

At the same time, the Chinese Communist Party (CCP) has been leveraging its Belt and Road Initiative to carve out a stake in the South Pacific by offering infrastructure deals to many developing countries.

“What the Chinese are doing is classic British diplomacy in the 19th century and the United States in the early 20th century between Britain and France,” Siracusa told The Epoch Times. “It’s about leveraging money and finances to get a foothold.”

One of the most famous examples of the Great Power competition was the “Great Game,” which occurred in Afghanistan and Central Asia during the 1800s between the British and Russian Empire—both countries manoeuvred diplomatically and politically for more than a century to fend off a possible invasion from the other.

According to Siracusa, the same scenario is playing out in the Solomon Islands.

“All this changed when the leadership in Honiara withdrew its support from Taipei in favour of Beijing; that’s the constant here,” he said. “If it hadn’t switched leaders or loyalties, I’m sure Beijing would not have come calling with their chequebook.”

Embattled Solomon Islands Prime Minister Manasseh Sogavare has been defiant in his decision to sign the security deal while also giving assurances to Australian and U.S. delegations that the security deal won’t result in a military base being established in the region.

“When Australia signed up to AUKUS, we did not become theatrical or hysterical about the implications this would have for us,” Sogavare said in a fiery address to the Solomon Islands Parliament on April 29. “We respected Australia’s decision.”

Experts have said a fully implemented security deal would lead to geopolitical tensions akin to the South China Sea.

Australian Prime Minister Scott Morrison has warned of the challenges of competing with Beijing for influence in the region.

“There are 20 Pacific Island foreign nations. … There are 20 areas which we’re looking to ensure we counter that (CCP) influence,” Morrison told Radio 2GB on April 26.

“We’re the only country in the world to have an embassy in every single one of those Pacific island nations. So it’s an area which is tightly contested, and we’ve always been heavily forward-leaning. But we’re dealing with the Chinese government that doesn’t play by the same rules.”