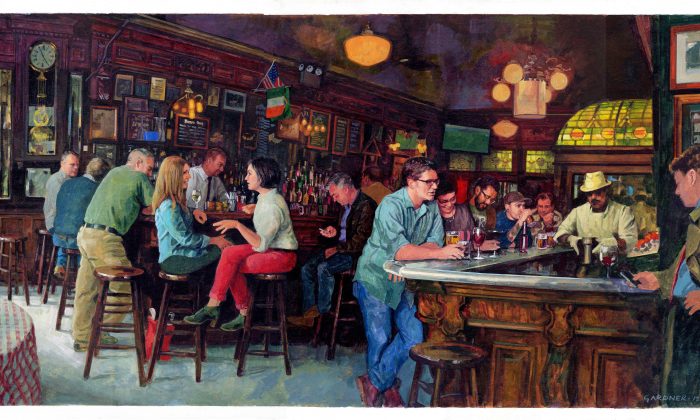 NEW YORK—The organization that makes sure New York keeps its character is turning 50 next year, and the celebrations are beginning early.

The Landmarks Preservation Commission (LPC) was born in the rubble of old Penn Station, which was demolished in 1963 despite public outcry. Since 1965, the LPC has protected over 30,000 buildings and sites throughout the five boroughs that embody aspects of the city’s cultural heritage.

For its big five-o, the LPC has called together nearly 100 New York City organizations to throw it a big, yearlong bash that’s sure to make every New Yorker aware of its work. The Society of Illustrators is one of these organizations and has put together an exhibit that shows off its members’ appreciation of the city.

She didn’t count herself, but Memorial Day found her and a friend from the society out sketching the Intrepid. It’s this city-loving spirit that comes through in all the artworks in the exhibit.

In typical society fashion, the 64 artworks show a remarkable breadth of styles and techniques, ranging from highly finished oil painting, to collage, to entirely digital creations. Some illustrators chose an interior while others examined a building, a neighborhood, or even the entire skyline.

From the obvious (Empire State Building and Lady Liberty) to the overlooked (sidewalk clocks and the underside of the George Washington bridge)—artists covered a surprising amount of ground. They also employed some unexpected methods.

Chris Spollen starts by building a 3-D model, photographs it, and digitally creates an environment for his object—in this case, a boat of wood and metal is displayed adjacent to the resulting image of South Street Seaport.

Jeff Preston also delves into a third dimension, but with the help of 3-D glasses. His fantastical marker drawing of a woman at the Cloisters somehow pops when seen through red-and-blue lenses.

Scenes of All Stripes

Stephen Gardner spends a lot of time in landmarked New York City bars, observing and painting those brief moments when New Yorkers temporarily give up rushing about in favor of a pint. In richly colored gouache, Gardner immortalizes the convivial atmosphere at P.J. Clarke’s and Whitehorse Tavern.

Eric Fowler focuses his work on storefronts in expressionistic oil. They are always a little leaning or bulging, as if their walls are growing. Among his pieces in this exhibit is one of the Flatiron building swathed in scaffolding—which New Yorkers will say is a sort of landmark in itself.

The late Alan E. Cober, was a famed illustrator for The New York Times, Life, and Time. An iconic cityscape he painted in the ’80s, faded from age, was lent by his daughter, (also the show’s curator) Leslie Cober-Gentry, for the exhibit. Cober was one of the old hands at this illustration game.

Anthony Calandra, on the other hand, is one of the newer artists. His buttery-smooth oil pastel rendition of the vaults in St. John the Divine, the light sifting through the stained glass, transports a viewer right to the pews and floors him.

There’s a lot of love for the outer boroughs, too. Joel Iskowitz, best known for his designs for coins and stamps, sketched a tribute to the Edgar Allan Poe Cottage in the Bronx. Niall McCormack (who sent his submission all the way from Ireland) celebrated the Louis Armstrong museum in Queens with a digital print.

Whether they reside in the five boroughs or far away, these artists say in so many ways that they are part of the city and the city is part of them.

Perhaps Trey Bryan’s free and naive sketches capture this best. His entire notebook is framed, opened to a spread he filled while sitting on the steps of the Metropolitan Museum. In it, squiggly impressions of tourists hunch over their cameras as pigeons try to score a scrap from their meals.

In a corner of the page, he scribbles, “I was sitting on the steps of the Met on this beautiful day. Lots of French people around. Also really beautiful.”

See an interactive map of landmarks as well as NYC’s historic districts at the Landmarks50 website, nyclandmarks50.org. See photos of some of the 30,000 buildings and sites the LPC has saved over the years here.