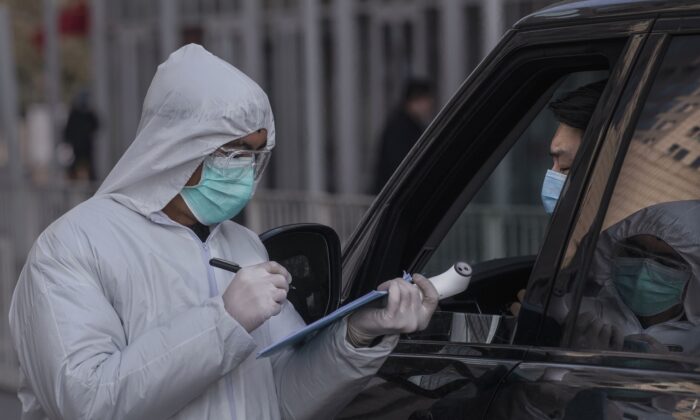 A Chinese worker wears a protective suit as he takes the name of a driver in a vehicle entering an office building while checking people in Beijing on Feb. 10, 2020. (Kevin Frayer/Getty Images)
Viewpoints

Socialized Medicine in the Shadow of Wuhan

Years ago, I hate to say how many but you can look it up and do the math for yourself, at the age of 16 or so I used to argue with my late father about socialized medicine.

He was a doctor and a pioneer of sorts who helped found the first private radiological office in New York City. The inventor of several operations, including for cancer of the cervix, he also had security clearance and treated the Hiroshima Ladies when they were brought to this country after the bomb.

I, of course, took the youthful idealistic side advocating free healthcare for all under a single-payer government plan. I even recall, to my everlasting regret (it was ugly and adolescent given the commandment about honoring thy father and mother) implying that my father’s opposition was based heavily on greed and self-interest. He was a successful physician and I, needless to say, benefited from that. He paid for my college education and most of graduate school.

My father, although a Stevenson Democrat, advocated a free market (private insurance) approach to healthcare for several reasons: Government centralization, he said, would diminish medical innovation and the discovery of new cures. By lowering pay it would reduce the incentive for the “best and brightest” to be doctors or be in the healthcare field altogether, something we should want.

He also warned that although socialized medicine looked attractive, the quality was inevitably worse and you would have to wait in line for treatment when ill, sometimes for a dangerous period. He further cautioned that society would not be able to pay for such a system.

It’s important to note, that my father never, that I know of, turned down anyone for treatment because of financial status. He simply worked pro bono and fully expected that was a physician’s duty.

Very little appears new to us today in his arguments, but it’s clear to me now, decades later, my father was right.

It’s clearer still in the shadow of the disastrous coronavirus we are now experiencing that has emanated from Wuhan, China, spread across that nation and, to a lesser degree so far but expanding, into countries throughout the world.

No one seems to really know the extent of it—or if they do they’re not saying—or even exactly where it came from, whether from a seafood market or, more sinisterly, a biological warfare laboratory or somewhere else. Nor do we yet know how lethal this virus is, although many are dying, many more than publicly admitted, possibly by a staggering amount, but we do know one thing:

THIS ALL HAPPENED AND IS HAPPENING UNDER SOCIALIZED MEDICINE.

Sorry for the caps. I find them rude and vulgar myself, but this is one time it seems appropriate.

Yes, government should, in fact must, have a role in healthcare, but when it has the dominant one, when an inherently complex system becomes increasingly bureaucratic, we are asking for inefficiency (cf. the Obamacare website), a plethora of mistakes with little redress (try suing Uncle Sam) and, most importantly, a built in lack of transparency, a potentially lethal self-protectiveness.

In the case of China, this is particularly true, because as a precarious (they are almost always precarious) communist regime, they feel constrained to lie about what is occurring to protect their power. That is what is transpiring now before our eyes. It’s almost on the level of desperation and is having serious repercussions across the globe.

This is all worth considering as we move forward in our presidential election where at least two of the Democratic candidates—Sanders and Warren—are espousing outright socialized medicine.

Others—Buttigieg, Klobuchar, Biden and Bloomberg, to cite only those with chances of winning at this point—support a “public option,” usually implying that it is only temporary and a transition to the inevitable single-payer. For now, they don’t want to offend the millions on private plans, frequently won by their unions and almost always preferable to anything that would emerge from a socialized system.

The candidates often point to the Scandinavian countries as examples of what we should do, neglecting to point out that those countries each have populations roughly half the size of Los Angeles County’s. Very little they do is analogous to the United States with a population of 330 million. Although smaller than those behemoths, we are more comparable to China and India. At the same time, those Scandinavian countries are themselves rejecting socialism.

My last argument against socialized medicine is that it is, ironically, much more hierarchical than ours. Despite what Michael Moore might tell you in his thoroughly-dishonest film about Cuban healthcare, socialist countries are the last place you would want to be if sick—that is if you’re not a member of the politburo or at least the nomenklatura.

I was in the Soviet Union twice on cultural exchanges in the late eighties, about the same time as Bernie Sanders’ honeymoon in the same country. (I don’t think we really visited the same place.) Because I was with a group of screenwriters, I was taken to Scriptwriter 1 and 2, two relatively nondescript high-rises inhabited entirely by writers whose work was approved by the state.

Several of them told me they didn’t really wish to live there—too many writers and little contact with the people they were writing about and for. Also, they felt watched. So I asked why they stayed. It was, they told me unanimously, the only building in Moscow with a decent clinic.

The Epoch Times’ senior political analyst Roger L. Simon is an award-winning novelist and an Academy Award-nominated screenwriter. His most recent book is “The GOAT.” Follow him on twitter @rogerlsimon.