Socialists Poised to Complete Takeover of Los Angeles in November 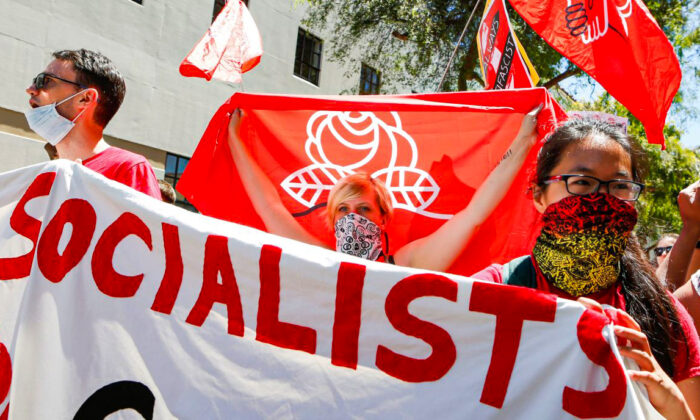 After Angelenos failed to gather enough signatures to put the recall of District Attorney George Gascón on the ballot in November, he’s all but ensured of at least another two years in office. Also on the ballot are a number of other Gascón-like candidates, and they’re also likely to win.

Had the Gascón recall made it on the ballot, his recall was almost a certainty. The issue was clear. Crime is up dramatically in Los Angeles over the past two years (vehicle thefts by 40 percent, homicides by 50 percent, armed robberies by 60 percent). It’s pretty easy to see that the cause is Gascón’s no bail, reduced sentence, early release, “equitable” approach to crime fighting, where the police are the criminals, and the criminals are the victims. A recent poll showed more than two-thirds of those with an opinion supported the recall. His socialist counterpart in San Francisco, Chesa Boudin, was recalled by a similarly wide margin earlier this year.

The relevant question for today is: How was Gascón elected in the first place? He was running against a black female Democrat incumbent. She wasn’t exactly a “throw the book at them” prosecutor. But Gascón swept in, thanks to millions of dollars from far-left interests, including George Soros, and a superior ground game.

Prior to Gascón, the position of L.A. district attorney was like voting on judges. If people voted on the race, they did so based primarily on name recognition or the occupation stated under the candidate’s name. So, it was an easy position to poach by the radical left.

Those same interests are now looking for other, lower-profile positions, to steal. For instance, the position of city attorney. The city attorney prosecutes misdemeanors. Since Gascón helped to make so many crimes misdemeanors (such as all thefts less than $950), this position becomes far more important in fighting crime.

The position also defends the city against lawsuits. The most significant of late have involved the out-of-control homeless situation. Both homeless advocates and business interests have sued the city for its handling of the problem. Thus, the city attorney has a very significant role in the city’s response to homelessness (i.e., build permanent housing to solve the problem, or enforce no camping laws in the city’s parks, beaches, and sidewalks).

Sounds like an important job, right? Yet Angelenos have no clue who’s running or what they stand for. Due to the open primary system wherein the two top vote-getters advance to the November general election, both candidates are Democrats. But if you take some time to look under the hood, you find that one is a somewhat mainstream Democrat, and the other is a far-left, Bernie Sanders/George Gascón, Democratic Socialist.

That candidate is Faisal Gill. He’s endorsed by the “Feel the Bern” Democratic Club, Minnesota leftists Rep. Ilhan Omar and Attorney General Keith Ellison, and far-left Los Angeles City Councilman Mike Bonin (who also faced a recall effort due to the homeless crisis that many believe was created by his progressive policies).

Bonin says, “Gill is guided by a vision of inclusivity as well as social and economic justice.”

Gill’s endorsements note that he will stand up to the Los Angeles Police Department and “corporate polluters,” reform misdemeanor prosecutions, and protect “oppressed communities.”

Clearly, if he wins, his mandate won’t be to defend the city and prosecute crimes to his fullest ability. It will be the exact opposite. His only experience is having been a civil rights attorney. Yet, Gill came out of nowhere to win the primary by 4.5 percent. How did he do it? No doubt the same way Gascón did, with substantial help from the far left and Bernie’s Democratic Socialists.

One campaign reported to me that this group was seen out in force, walking the streets to get out of the vote during the primary. Ballot harvesting, in which people knock on doors and help people to fill out and turn in their ballots, is legal in California. Every registered voter is mailed a live ballot, whether requested or not, a month before the election. This gives ballot harvesters a lot of time to do their work. This means whoever has the best ground game likely wins.

According to the Democratic Socialists of America website, “Bernie Sanders launched a political revolution and DSA continues to build it, training our chapters to effectively support democratic socialist candidates running for local and state office while lifting up our key issues.” Here are some of the radical, socialist positions of their platform:

(Scary side note: These policies aren’t far from those of the Biden administration.)

According to the campaign official, many or most of these Democratic Socialists getting out the vote were from outside the city and the state.

They also support a candidate for city controller, Kenneth Mejia. Like Gill, he came out of nowhere to blow away his closest opponent, a longtime sitting Los Angeles councilman, by 16.5 points. Mejia graduated from college just 12 years ago, is a former community organizer, and is also endorsed by the Feel the Bern group.

And as for the Bonin council seat, which includes virtually all of Los Angeles’s coastline, socialist Erin Darling also came out of nowhere to win the primary. He is endorsed by “Our Revolution, Feel the Bern, LA County” and “Feel the Bern Democratic Club.” He will be up against Traci Park in November, a “normal” Democrat.

And that is the current state of Los Angeles, where it’s no longer Democrats versus Republicans, but Socialists versus Democrats, and the Socialists are winning. This includes the top race for mayor, in which community organizer and longtime Fidel Castro admirer Karen Bass beat businessman Rick Caruso by 7 percentage points in the open primary and who appears poised to sail to victory with her socialist friends in November.

James Breslo
James Breslo is a civil rights attorney and host of the “Hidden Truth Show” podcast on TuneIn. He was formerly a partner at the international law firm Seyfarth Shaw and public company president. He has appeared numerous times as a legal expert on Fox News and CNN.