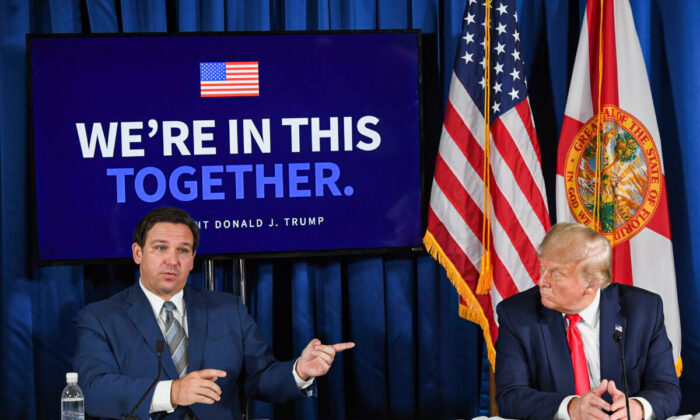 An analysis of social media posts shared with The Epoch Times shows growing momentum for Florida’s Republican Gov. Ron DeSantis as the GOP presidential nominee in 2024 among voters who aren’t solidly in the Trump camp.

“A sizable portion of the positive discussion (32 percent) speak of him as preferable to Trump,” said the summary analysis of the research paid for by the Ready for Ron Committee—a draft committee that is encouraging DeSantis to run for president.

“To them, he is the rightful heir and suggest the former president step aside and allow the younger man to run the gauntlet,” the analysis said of the majority of surveyed voters.

The research, which was conducted by Impact Social, looked at 40,000 “swing” voters on social media and categorized them into ten segments, from “Disillusioned Trump” voters, Obama-turned-Trump voters, to “Bernie Sanders” voters.

Trump Gets More Traction, But More Attacks Too

While the name Trump is more prominent on social media than DeSantis, Impact Social reported that Trump-related posts attract more negative sentiment, including among right-leaners who would otherwise favor the GOP in 2024.

“It is interesting to note that, despite many of these floating voters emanating from the right of the political spectrum, only a relatively small number come to Trump’s defense,” Impact Social said.

The recent hearings regarding the Jan. 6 breach also haven’t helped Trump among undecided voters. While the hearings have fallen far short of proving that an insurrection occurred in a legal sense, they certainly didn’t burnish the image of the former president.

“Well, I think in retrospect, I think it would have been very smart to put [Republicans on the committee] and again, I wasn’t involved in it from a standpoint so I never looked at it too closely but I think it would have been good if we had representation,” Trump told conservative radio host Wayne Allen Root earlier this month, blaming Republican House Minority Leader Kevin McCarthy (Calif.) for a “bad decision” on declining to put someone on the Jan. 6 House Committee.

Still, Trump remains the odds-on favorite for the GOP nomination, with a recent poll by Quinnipiac showing that 69 percent of Republicans think Trump bears little blame for the Jan. 6 riots.

Polling continues to show that Trump has a commanding lead against DeSantis, who is not well-known outside of Florida or outside the GOP activists base, even as DeSantis is reported by some to be eating into Trump’s lead as of late.

A recent Granite State Poll by the University of New Hampshire showed Trump and DeSantis in a statistical dead heat in New Hampshire, more than doubling the DeSantis support since October.

But as the head of the Ready for Ron Committee, former Reagan campaign manager Ed Rollins previously told The Epoch Times that it’s doubtful that DeSantis would run against Trump if Trump actually seeks the nomination.

The committee’s goal isn’t to supplant Trump, but to make sure there is a candidate that can carry on Trump’s legacy if Trump declines to run, is unable to run, or runs into trouble, Rollins said.

“Under President Donald Trump’s leadership, the United States enjoyed record unemployment, economic stability, safety, and global respect. Many are yearning for a return to these policies and the prosperity good leadership can bring,” Ready for Ron legal counsel and spokeswoman Lilian Rodríguez-Baz told The Epoch Times via video.

“The era of President Trump was wonderful, but now, since he isn’t currently running, we must get ready for a new leader, we must be Ready for Ron,” Rodríguez-Baz added.

Still, it’s difficult to handicap a presidential race when there are no real campaigns being run. To date, neither DeSantis nor Trump have announced that they are running, nor have they filed paperwork to run.

A candidate can look great on paper, but fail to execute well once they actually make the decision to run, as another popular large-state governor, Republican Rick Perry of Texas, found out in 2012.

Trump, having won previously, is less of an unknown than DeSantis is in this respect, so he remains the favorite for the nomination.

Yet, the Ready for Ron Committee notes that despite attempts by Democrats to tar DeSantis with the same brush they used on Trump—as allegedly being too radical, racist, and irresponsible—DeSantis is holding up well under the barrage.

“While misguided and false attacks from the radical left increase, his support does too,” Rodríguez-Baz said.

“The radical left is risking our future, and DeSantis has the courage to fight back, which is why they fear him so much,” the Ready for Ron attorney added.

The committee cites a number of DeSantis policies—from the anti-grooming laws passed under the governor, to the hard stand against Disney and the Tampa Rays on social issues, the elimination of Critical Race Theory and Social Emotional Learning in school textbooks in Florida, and the refusal to cave to the COVID-19 alarmists and shut down the state economy over the virus—as reasons why independent voters like DeSantis.

DeSantis’s take-no-prisoners style has endeared him to the GOP base, and outraged Democrats, in much the same way that Trump did, but with a big difference, say some conservatives who previously voted for Trump and who are active on Facebook.

“DeSantis is cut from a similar cloth as Trump, the big difference is that DeSantis isn’t as despised and hated, yet, as Trump is,” Del Wilber, a former intelligence professional from Illinois who voted for Trump, told the Epoch Times.

“The country needs less drama right now, it’s being pulled apart at the seams. I think DeSantis will help reduce that,” he added.

Similarly, Harry Compton of Juneau, Alaska, who is self-employed, told The Epoch Times that DeSantis could serve two terms and has the “ability to form a wide coalition.”

“I was a Trump supporter, and still like Donald Trump. But time marches on and the presidency is a job for those of the present and the future,” Compton said.

Others echoed Wilber’s and Compton’s rationale, but added more nuisance and optimism about DeSantis.

“[Trump’s] time has come and gone. He carries too much baggage, he’s too impulsive in his communication style. He would be 79 and so many still hate him, they would vote for anyone over him,” Tawn Ulbrich Otrhalek, a retired mom who describes herself as both Christian and conservative, told The Epoch Times.

“DeSantis, on the other hand is a rising star. He’s younger, and what he’s done and is doing for Florida pre- and post-pandemic is what he would do for the rest of the country if he were president,” she said, adding that she thought Trump was “the greatest president the country has ever had.”

But others say Trump is still their favorite for 2024.

Each of the Facebook users said they’d prefer Trump over Biden.

Impact Social noted that right-leaning voters in liberal states who are soft on support for Trump appreciate DeSantis for the unique way he led Florida through the COVID-19 crisis and his forceful political leadership on issues.

Florida has gone from a being perennial swing state to what some experts are now calling a “safe” Republican state, due in part to changing demographics that saw the Democrat’s voter registration advantage shrink to a deficit favoring Republicans.

But the voting sea-change is in no small part also due to DeSantis’ leadership that provides a marked, positive contrast from Democrats, said the Facebook users who spoke to The Epoch Times.

Outside of the partisan polling, DeSantis is enjoying a comfortable lead in his reelection campaign against the expected Democrat nominee for governor, Charlie Crist, according to an average of polls by Real Clear Politics.

That’s exactly the type of leadership that the GOP is hoping will help solidify gains with voters who Republicans want to woo in the mid-terms nationwide.

“A lot of Democrats who will vote against Biden in the midterms in 2022 will vote against Trump in 2024,” Tony Marsh of Savanna Communications told The Epoch Times in an interview last week, noting that it’s a historic chance for the GOP to make inroads on once-sacrosanct Democrat voting groups.

Some are hoping then that DeSantis can do for the country what he did for Florida, by turning it solidly red.

“Despite some pondering if 2028 might be a better time for DeSantis, this conversation clearly shows that those on the right, who might hesitate to vote for Trump, would eagerly sign up for DeSantis,” the Impact Social researchers concluded.

What’s more uncertain is if DeSantis can cobble together the same type of blue-collar support that Trump put together in the upper-Midwest in places like Wisconsin, Michigan, Ohio, and Western Pennsylvania to a forge his victory in 2016.

After all, electoral votes in presidential elections are awarded by states, not by social media outlets.