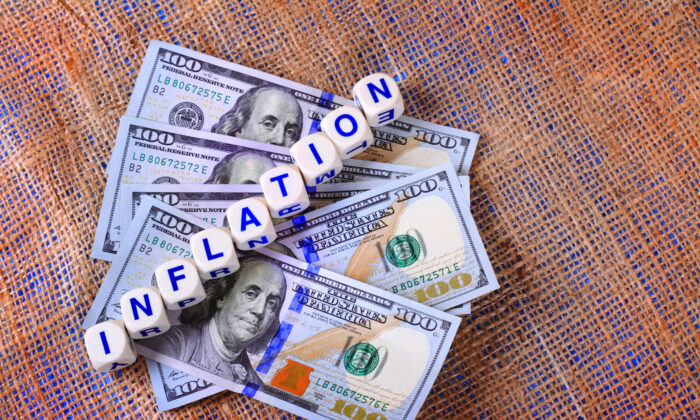 The pandemic-era inflationary wave that has swelled into a persistent cost-of-living crisis for many Americans was driven mostly by a stimulus-fueled demand surge, although supply-side bottlenecks made the problem worse, a team of economists said in a recent study.

Julian di Giovanni, an economist at the Federal Reserve Bank of New York and co-author of the study (pdf), summarized the team’s findings in an Aug. 24 blog post that comes amid an ongoing debate as to what caused inflation to soar to multi-decade highs.

Di Giovanni said demand-side factors were primarily responsible for inflation in the United States between 2019 and 2021, accounting for 60 percent of the inflationary crunch that continues to erode Americans’ purchasing power.

Changes in household spending patterns had a negligible effect on prices, while supply-side factors accounted for the remaining 40 percent of inflation, which di Giovanni characterized as “very elevated.”

Inflation, as measured by the Consumer Price Index (CPI), has risen sharply and steadily since pandemic-era lockdowns were lifted, from an annualized 2.7 percent in March 2021 to a recent peak of 9 percent in June, according to data from the Bureau of Labor Statistics.

There has been fierce debate about what factors led to prices accelerating at their fastest pace in decades, with some—including many members of the Biden administration—chiefly blaming supply-side constraints, while others—including many Republicans—pointing the finger at unprecedented levels of fiscal and monetary spending.

Heated discussions have also occurred about the persistence of inflation, with initial takes that it would be transitory giving way to the view that it’s become far stickier and more difficult to quell.

While supply-side constraints, such as labor shortages and supply chain bottlenecks, have pushed inflation higher, di Giovanni said these were “made worse by the push arising from increased demand caused by very expansionary fiscal and monetary policy.”

The model that underpins the study calculated that CPI inflation between 2019 and 2021 was an annualized 9.18 percent, with the actual observed inflation over the same period coming in at 8.47 percent, confirming the accuracy of the model-calibrated rate, according to di Giovanni.

“Our work shows that inflation in the United States would have been 6 percent instead of 9 percent at the end of 2021 without supply bottlenecks,” he said, noting that it’s possible that the continued easing of supply-side constraints will lead to a “substantial” drop in inflation over the near term.

Last year at roughly the same time, Fed Chair Jerome Powell insisted that the inflationary jump would likely be “transitory,” a prediction he later acknowledged was wrong.

In the face of softer economic data, including two back-to-back quarters of negative gross domestic product growth that constitutes a common rule-of-thumb definition of a recession, market expectations have risen for a Fed rate hike pause—or even a cut.

While there are some signals that the Fed might opt for a slower pace of rate increases than the 75 basis-point pace at its past two policy meetings, analysts say Powell might use his speech at Jackson Hole to temper expectations for monetary easing, given the persistence of inflationary pressures.

“Powell will likely attempt to stress a slower pace of hikes, but also a longer period of time in restrictive territory, taking a little wind out of the sail for the dovish pivot narrative,” Jack Janasiewicz, lead portfolio strategist at Natixis Investment Managers Solutions, told Reuters.

The so-called core Personal Consumption Expenditures (PCE) price index, which is widely considered to be the main benchmark by which the Fed measures the pace of inflation against its 2 percent target, rose from an annual 4.7 percent in May to 4.8 percent in June, the latest month of available data.

With core PCE running at more than twice the Fed’s target and with analysts expecting July’s PCE data to show inflationary pressures edging down negligibly to 4.7 percent in July when the data is released on Aug. 26, the Fed’s fight against inflation could well be drawn out.