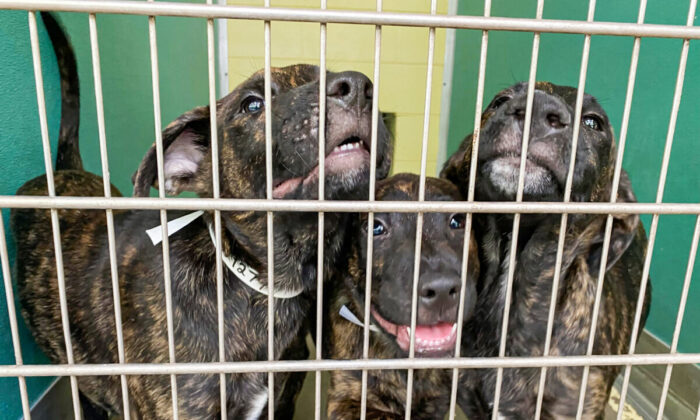 Soaring Cost of Living Causes Spike in Number of Pets Being Abandoned, Surrendered to Shelters

'All of the shelters in the area are full because no one is adopting.'
By Patricia Tolson

According to a growing number of reports, the soaring costs of food, gas, and housing are causing a spike in the number of family pets being abandoned or surrendered to shelters.

In January 2022, the first alarming animal shelter statistics began to emerge. While an average of 6.2 million animals are taken into shelters each year, only about 3.2 million find a home. The other three million are euthanized.

In April, shelters across Utah were reporting that millions of pets adopted during the outbreak of the Chinese Communist Party (CCP) virus (commonly known as the novel coronavirus) of 2020 were being surrendered again as the high cost of living and the return to in-person working was making it impossible for pet owners to continue to care for their animals.

In May, Orange County Animal Services in Orlando, Florida, reported a 37 percent increase in the number of surrendered pets compared to the same time in 2021. Officials say the increase in housing costs in the area is the primary reason why people are being forced to surrender their pets. In Hernando County, Florida, shelter administrators are seeing a similar spike in the number of family pets being surrendered or simply abandoned on the streets.

“It’s not as frequent as when COVID initially hit but we have recently had people abandoning pets on property,” Sara Marek, medical coordinator for the Humane Society of the Nature Coast, told The Epoch Times. “We had a gentleman come in trying to surrender his cat. At the time we couldn’t take it in so he did just take the cat and let it loose right in our parking lot. So, unfortunately it is happening.”

The week before, someone had tied a dog to a pole outside of the gate during the night, which wound up going to Hernando County Animal Services.

Shelter Manager Georgionna Waite said the number of animal surrenders is on the rise.

“As far as owner surrender requests, I would say we’ve seen an increase over the past six to seven months in general,” Waite told The Epoch Times, adding that loss of home for the pet owner is the most frequently given reason.

“That and having to move to someplace more affordable that simply doesn’t allow pets,” Marek added. “There are a lot of places that just don’t allow animals, period.”

“In my opinion, it’s gotten better over the past two to three months, versus where we were six months ago, but you go to some stores and you can’t find cat food,” she said.

A reason suggested by Marek for the shortage in cat food as opposed to dog food is this is the time of year known in the shelter community as “cat season,” when unspayed stray female cats, known as “community cats,” are giving birth to litters of kittens. It was an opinion shared by Waite and Ritter. During these times, animal lovers in many neighborhoods take it upon themselves to purchase food to set out for these cats and their growing kittens.

With the surge in animal surrenders, shelters are also in desperate need of volunteers to help keep staff from being overwhelmed and burned out. Because of staffing shortages, those who are there are often working long hours. Against popular belief, animals in the care of reputable shelters do not simply sit in their cages and pens all day. While the overworked staff concentrates on conducting intake interviews, processing paperwork, and providing medical care for the animals, volunteers help ease their burdens by making sure each and every animal gets fed twice a day and receives plenty of enrichment and exercise.

Volunteers like James Schmeda and Ben Moser make sure the dogs are taken on daily walks and spend time romping in one of the shelter’s many outdoor play areas. Others like Marie Jones ensure that the cats get individual attention and human interaction while they wait for their new owners to come in and finally take them home.

Waite said there has also been a drop in donations, which shelters like HSNC depend upon for the care and welfare of their furry charges.

“With our facility we’re seeing a drop in the donations we are requesting,” Waite clarified. “We use Purina One here. We take in all donations but that’s what we feed our dogs primarily. We’ve had to switch to Pro Plan, which is better quality food, because it’s what we’ve had donated. But that’s because there isn’t enough Purina One available. It’s the same thing with our kittens. They’ve been switch to Purina Kitten Chow because we don’t have enough of the Purina One available.”

Shelters like HSNC rely completely on the generosity of people in the community. Many of the animals who are brought to the shelter are in need of medical care. Some have serious skin conditions. Some have been starved. Others have broken bones.

The more serious cases are those who have been physically abused or used as bait dogs in illegal dog fighting. Many of the animals arrive pregnant, and once they give birth, one animal turns into six or eight. Financial donations help them provide needed medical care and to cover staff pay and facility expenses. While financial donations are always welcomed, items needed regularly include food, toys, dog beds, leashes, collars, and cat litter.

Asked if they had suggestions for alternatives to shelter surrender or abandonment, Waite said rehoming on the part of the owner is one method of finding their pet a new home, by “reaching out to family members, friends, neighbors in the community.”

Ritter suggested posting information about the pet’s availability for adoption on social media, advising that “listing the animal with a small rehoming fee tends to get rid of some of the shadiness behind rehoming an animal online.”

People for the Ethical Treatment of Animals posted a warning on Craigslist that “animals given away for free can, and unfortunately often do, meet gruesome fates.” Pets might end up in the hands of animal abusers or by someone who is looking for a bait dog for dog fight training.

To further assist pet owners in finding a safe and loving new home their pets, there are also online rehoming websites like Pet Adoptions Network and Rehome by Adopt-a-Pet.com, which walk pet owners through a detailed screening process that involves applications and pre-adoption visits with potential new owners.

Waite also noted that “if you are rehoming your animal online, you can deny people. You don’t have to give it to the first person who shows up and says, ‘Yes, I’d like your dog.’ You can still say no.”

“You have to do your best,” Marek advised. “Go through the vetting questions. You can also contact any shelter and find out what kind of vetting questions they might ask potential adopters. A lot of shelters provide resources on how to rehome on your own. You can even do an internet search for questions to ask. There are lots of options out there.”

To assist those who are considering surrendering their pets because they can’t afford to feed them, HSNC generously gives back to the community by keeping its Little Pet Pantry, located just outside of the front gate, fully stocked with free cat and dog food.

Ritter said Hernando County Animal Services (HCAS) is becoming overwhelmed with strays. In fact, Florida law states: “It shall be unlawful for any person to harbor, feed and/or keep any stray animal unless he or she has notified animal services within twenty-four (24) hours from the time such animal came into his or her possession.”

In other words, if you find a stray, shelters like HSNC are not legally allowed to take the animal in. Strays must first go through the county’s animal services department. Making matters worse, Ritter said while stray dogs are pouring in, their dogs adoptions have essentially come to a full stop.

“I looked at a report today and we have two small dogs that have pending adoptions,” she lamented. “Other than that, nothing. None of our big dogs have adoptions. In fact all of the shelters in the area are full because no one is adopting. So we’re having a hardship because we are the only shelter in the county that takes in stray dogs, so we’re having a hardship trying to place all of these stray dogs because they’re coming in hand over fist and we’re not able to get them out quick enough.”

Sadly, the number of strays and surrenders has become so overwhelming that they are being forced to euthanize some of the animals to keep the numbers from getting out of control.

As of right now, Ritter said that number is very little. Last week, they had to euthanize one dog. It was the first dog they had to put down in the past several months. Thankfully, Ritter said they have great partnerships and a lot of other rescue services and shelters that come out and take the overflow animals so they don’t have to go through the painful necessity of euthanasia. “But now that everyone is starting to get full again because no one is adopting, it puts all of the animals at risk.”

Ritter said she’d recently spoken to Pasco County Animal Services, and employees there said they’re having the same issues. They said their contact in Hillsborough County told them the same thing, and that they opened up a warehouse just for new intakes because the Hillsborough County shelter facility was full.

“Unfortunately, Hernando County doesn’t have that luxury,” Ritter said. “If it keeps on going it could mean we have to euthanize again.”

Marek noted that she has seen an increase on social media of shelters pleading for people to adopt.

“Especially in the south,” she said. “Alabama, Georgia, Texas. A lot of states in the south are having trouble moving medium-sized and large dogs. Just nobody wants to adopt and they’re all just flooding in and not going anywhere.”

In an effort to give the animals exposure to the public to improve their chances of adoption, HSNC holds adoption specials. So does HCAS. In fact, Ritter said an adoption special they held last week helped find five of their dogs a new home. But even with those five that left, Ritter said they were full again by the next Monday morning and had to euthanize.

“That just goes to show you how may animals are coming in every day,” she said.

For anyone who wants to help but isn’t quite prepared to adopt, Waite, Marek, and Ritter offered a number of ways to help alleviate the pressure on local shelters. Primarily, “Foster, adopt, and share.”

A foster is someone who is willing to take an animal into his or her home without the commitment of adoption. While in a foster’s care, the shelter assumes all financial responsibility for food and medical treatments. However, if a foster has room in their home and heart and is secure enough financially to care for an animal, adoption is always preferred.

For those who are unable to do either but still want to help, the shelter employees said a lot can be accomplished by sharing the information and photos of available pets with family, friends, and neighbors, especially through social media.

“The further the reach of the information of the animals we have available, the better the chance we can get an adopter through the door,” Waite said.