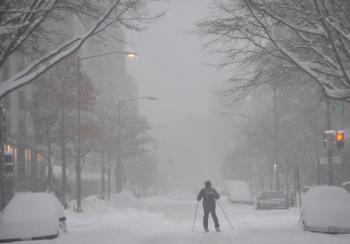 A skier makes his way down a snow-covered street December 19, 2009 in Washington, DC. (Mandel Ngan/AFP/Getty Images)
US

Few Delays for Amtrak on Monday After Weekend Snowstorm

Nicholas Zifcak
View profile
Follow
biggersmaller
Print
As of Monday morning, some Amtrak trains were still delayed by the snowfall that hit the East Coast this past weekend.

For Monday Dec. 21, some regularly scheduled trains were canceled in the eastern region to allow Amtrak to reposition trains and ease congestion. Many of the cancellations were earlier Monday morning, although there were still some delays in the "half-hour category" said Black.

Most Acela trains will run on schedule, with one canceled and one running on a modified schedule.
Four Harrisburg-Philadelphia Keystone trains were canceled for Monday. Further details are available on Amtrak's Web site www.amtrak.com.

The holiday season is a busy time for Amtrak. Trains between Washington DC and New York were full this past weekend. According to Black, "Amtrak continued to operate in the teeth of the blizzard."