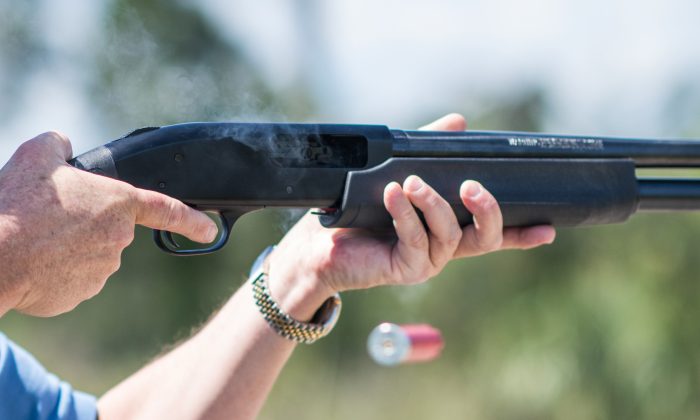 Jonathan Mossberg, whose iGun Technology Corp. is working to develop a "smart gun," poses with the firearm in Daytona Beach, Fla., on April 7, 2016. The firearm uses a ring to send a signal to prevent anyone but an authorized user from firing the weapon. (AP Photo/Lisa Marie Pane)
Companies

‘Smart Guns’ Preparing for Release to US Markets

After years of developmental and regulatory tribulations, “smart guns” may finally hit markets later this year, as several upstart companies are taking concrete action to bring their products to the public.

The firearms company LodeStar works has unveiled its 9mm smart handgun in a demonstration for shareholders and investors. Meanwhile, Kansas-based SmartGunz LLC has been beta testing a similar product for police officers. Both companies hope to sell their weapons to the public by the end of this year.

Personalized smart guns use fingerprint unlocking or radio identification technology to ensure that they can only be operated users wearing a designated ring or bracelet. Proponents claim that this technology offers a number of safety advantages over traditional firearms.

LodeStar co-founder Gareth Glaser claims he was inspired to work at the company by tragic stories of self-injury and death by children playing with unattended guns, and he hopes that a prevalence of smart guns will prevent such accidents. The technology is also seen as promising by many in law enforcement and prison security, who hope that smart guns will allow them to carry out their jobs without fear of their own weapons being used against them.

However, with all these safety benefits come additional risks. Critics fear that smart guns are vulnerable to hacking. In 2017, a pseudonymous hacker going by the name “Plore” raised eyebrows at a conference when he demonstrated several methods to hack a smart gun by German manufacturer Armatix.

Additionally, skeptics of the new technology protest that the guns may not be as reliable as traditional firearms. Because many of these weapons use fingerprint recognition to recognize designated users, they may become ineffectual in rain or other wet conditions (LodeStar has integrated a pin pad on their guns as a backup for these circumstances). These concerns had stymied the development of smart guns for the public, and they have heretofore remained firmly in the experimental phase of product development.

Yet, after years of slow progress, smart guns appear to be making tangible steps toward hitting the market in the near future.

For better or worse, these products will likely soon face the final test of the development process: the test of consumer demand, which will ultimately decide the success or failure of smart guns in the firearms market.