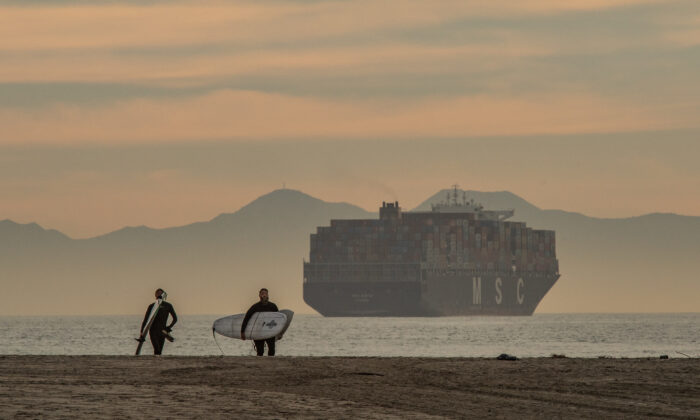 Small-Business Owners Complain of Product Shortages Due to Port Backlog

As the port backlog continues, some local business owners in Los Angeles County say they’re concerned about product shortages ahead of the holiday season.

Sandy Rosco, executive director of the San Gabriel Chamber of Commerce, said on Oct. 20, the businesses that are hurting the most are small to medium-sized, because their owners don’t have the capital or the space to have bought and stocked up on products ahead of time.

These businesses that survived the pandemic, she said, were counting on the Christmas shopping spree to get back on track.

“All these businesses were hurt last year [and] are looking forward to this holiday season to make up for [the loss],” Rosco said.

Josh Wataru, manager of Fanny’s Flowers in Temple City, said the store is facing shortages, for example, of many of its products that come from overseas, like vases and containers that are needed for floral displays.

“We’re facing a couple of different [shortages,]” he said. “The biggest one right now is for hard goods.”

He also said that his shop has had to raise prices on flowers, many of which are flown in from places such as Holland and South America.

Commercial air flights, which sometimes ship perishable goods like flowers, he said, have not returned to pre-pandemic levels, which in turn, has created price hikes, which Wataru has to pass on to his customers.

“We just can’t raise prices too much, because we feel that will drive customers away,” he said.

“Sometimes the pricing has gone up since the last time we ordered, and a lot of our suppliers are saying it’s all transportation-related,” said Figueroa.

According to Figueroa, the store is waiting for its holiday supplies—like Christmas lights—which have been delayed.

“I called my supplier last [week] and they told me that it’s in the Port of Long Beach. All of our lights are on a container ship somewhere out in the port,” said Figueroa.

The store, he said, is also in short supply of spray paint, electrical boxes, as well as plumbing and electrical tools.

But Hayley Chesshir, manager of the Pasadena branch of Ten Thousand Villages, which sells handcrafted products made by artisans from over 35 countries, said her shop was in good shape so far.

But she said she has a backup plan if things change, specifically borrowing products from the retail outlets’ other 70 stores across the U.S.

“We’re not feeling like we are in a dire situation regarding holiday products not arriving,” she said. “But we have a network of stores, so there are [more shipments],” already on their way to them.