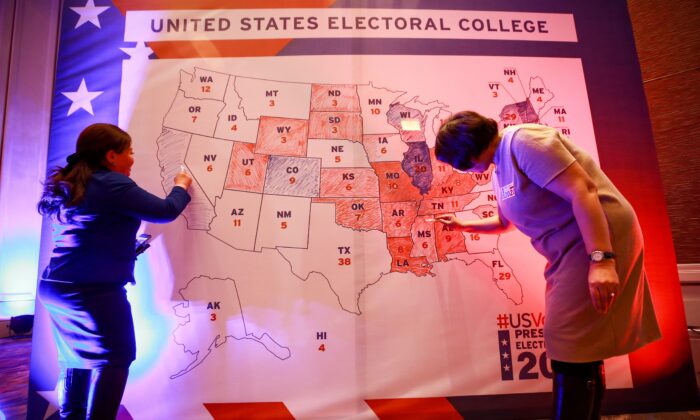 People color in an electoral map during a U.S. presidential election watch party at the U.S. embassy in Ulaanbaatar, Mongolia, on Nov. 4, 2020. (Byambasuren Byamba-Ochir/AFP via Getty Images)
Viewpoints

Slowly but Surely, Red States Are Getting Redder

I have written before—and am writing in more detail in my (slowly) forthcoming book “The Southbound Train”—how the new political migrants to red states from blue are often more devoted constitutional conservatives than the longtime residents of those supposedly conservative red states themselves.

It’s the reverse of the cliché that many believed—that the refugees from California, New York, and Illinois, pouring into places such as Florida, Texas, and Tennessee were just looking for tax havens and were going to infect their new homes with their liberal values.

Most of them are anything but liberal or progressive. Just go down to the Bold Patriot Brewing Co. that decamped in 2019 for Nashville, Tennessee, from Norco, California, look around for 10 minutes, and you’ll see what I mean.

Their slogan, printed under a musket, is Thomas Jefferson’s “The price of freedom is eternal vigilance.” Monday nights patrons hear lectures on our founding to accompany their draft suds.

Some of the newcomers are more than a little disappointed to find that red Tennessee isn’t quite the right-wing nirvana they had anticipated. It’s ironic that Florida, land of the hanging chads, ended up with the country’s most forthright conservative governor, while Tennessee—which went two-thirds for Trump in 2020 (no drop boxes, so no “mules”)—has more questionable leadership at the top.

A number of the newcomers are now leading the fight against that leadership, especially in the areas of education and election integrity.

It’s not true, however, that all the locals are laggards, because red states got that way for a reason. Somebody did it. Some of the bravest and truest were already there, sprinkled among the RINOs.

I was reminded of that at the luncheon of the Nashville Republican Women (yes, they admit men) on May 11, when the speaker was the deputy speaker of the state Senate, Janice Bowling. The personable Bowling, a woman in her 70s who, she tells us, cuts her own hair, is the kind of public official you wish you could clone and put in every government post in the country. She actually represents the people of her district. Imagine!

Particularly notable was her behavior during the pandemic. A fighter for medical freedom, she helped wrestle the Tennessee state House and Senate into a special session to make life more bearable for the citizens.

She explained what happened:

“We were told that the next week, we would probably leave [Senate and House] and not come back. … when everything was in flux. But we were all thinking this is not organic. This is manmade. This is something that we’re being forced to go through for political, economic, and non-biological reasons. When we realize that, you have to know who your enemy is. If you’re going to fight the fight, you have to; otherwise, you’re just wasting energy. So when we start to look down to see who the enemy was, we realized that in many instances, it was our government and it was communist China.

“And I felt like that, we have to examine everything we were told. We were told, ‘Oh, you got to use ventilators.’ I talked to doctors. They said, ‘No, no, the ventilators are killing people …. The father of ventilators who went and volunteered in New York at one of the hospitals, he assessed the situation. He estimated 85 percent of the people who died in New York are because they needed oxygen, not ventilators.”

Bowling, with several others, went on to get that special session. Thanks to them, these days, a lot of things have changed. You can buy ivermectin in a Tennessee pharmacy. It is, of all things, up to you, the citizen, what treatment you select.

Sitting in the audience at that same NRW luncheon was another relative newcomer from Texas, Gary Humble, who formed an organization called Tennessee Stands. Humble is running for the state Senate himself, against the Republican leader of the state Senate, Jack Johnson.

Johnson is the old guard, representing red Tennessee as it was; Humble is the newcomer, eager for reform. The battle is being played out in Williamson County, that rich Republican suburb of Nashville that is in turmoil over the infiltration of critical race theory and social-emotional learning in its vaunted public schools.

In recent school board primaries, the parent insurgent groups didn’t fare as well as similar groups in Loudoun County, Virginia. Again, this is ironic because the makeup of Tennessee is considered to be more conservative.

But the struggle has been joined. Coalitions between the truly conservative locals like Bowling and newcomers such as Humble are forming. It’s hard not to be optimistic that change is in the air for Tennessee and other red states.

The new demographics are changing things for the better—and not just in Florida.