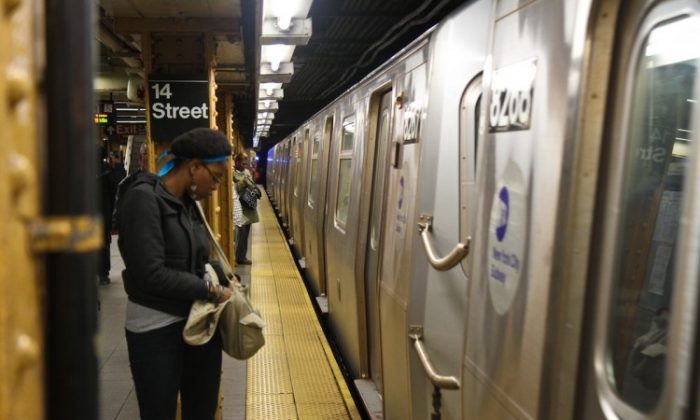 People wait for the R train on the Union Square subway stop in New York last December. The MTA announced that a security program has been pushed back six years.  (Benjamin Chasteen/The Epoch Times)
US

The program includes the installation of over 3,000 video cameras and more than 1,400 access-control devices at various stations and tunnels to be monitored at six local and regional command centers and one central command center. The work was scheduled to be completed in August 2008.

The cost of the program is currently at $516 million, which is nearly twice as much as the original budget. Limited access to the system due to minimizing traffic interruptions and other complications led to the delays, according to a report issued by state Comptroller Thomas P. DiNapoli on Wednesday.

The electronic security program was proposed as part of the MTA’s response to the Sept. 11 terrorist attacks. The response strategy included 57 security related projects that would be funded by the MTA’s 2000–2004 capital program. A fund of $591 million was allocated to the 24 highest priority projects.

Phase 1 was complete as of February this year at the cost of $882 million, except for the electronic security program, which is the most complicated section of Phase 1. Most Phase 2 projects have been deferred because of a lack of funding.

Though the program is behind schedule as a whole, the New York Police Department and the MTA are taking advantage of the completed sections to provide better service.

The MTA has made improvements to upgrade the infrastructure at 17 of its facilities to better withstand explosions. Sixteen have been equipped with better lighting, signs, ventilation, and communication systems to shorten emergency response times. Enhanced police patrols, baggage inspections, and public awareness programs have also been implemented as part of the operational initiatives.

“While the MTA’s capital security program has taken far longer and cost more than planned to complete, the regional transit system is more secure and the public better protected today,” DiNapoli said. “Further security improvements are needed and finding the necessary resources must be a priority for the MTA.”