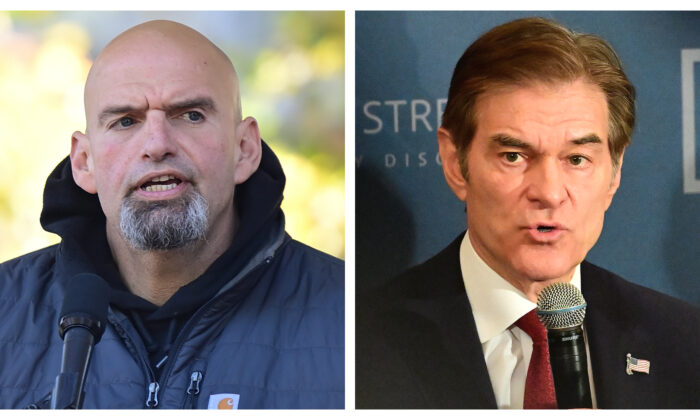 With just 13 days before the election, and early voting already underway, Pennsylvania U.S. Senate candidates John Fetterman and Mehmet Oz met Tuesday in Harrisburg at WHTM Television, for their first and only debate. It was a chance for voters to finally compare Republican Oz, a heart surgeon and television personality, next to Fetterman, Pennsylvania’s Democrat lieutenant governor.

Voters also got a glimpse of how Fetterman thinks on his feet after suffering a stroke before the May primary, which has left him struggling to communicate. When speaking, the once confident Fetterman has had a halting speech pattern on the campaign trail. This continued in the debate. He has had a modest schedule of well-controlled campaign speaking events.

For the debate, Fetterman requested a closed captioning system providing questions in written form to help him process the meaning of the questions from moderators, Dennis Owens, WHTM news anchor, and Lisa Sylvester, WPXI anchor.

As lieutenant governor, Fetterman traveled to each of Pennsylvania’s 67 counties in 2019 on a recreational marijuana listening tour. Many voters met him and heard him speak at that time, and can likely see the difference in his communication style today.

Fetterman and Oz were invited to a number of debates, but Fetterman did not finalize the details with those organizers that have routinely handled debates in the past. Ultimately he agreed to a single one-hour debate.

Here are some debate details voters may want to consider.

They were to monitor the social media accounts of top campaign workers and Fetterman’s wife Gisele, also known as SLOP, the toolkit noted. That stands for Second Lady of Pennsylvania.

The toolkit offers many ideas on what to post, in preparation for mistakes Fetterman might make. Suggested posts include the following:

“John did not get here by winning debates or being a polished speaker. He got here because he connects with Pennsylvanians.”

“John’s opponent has been a professional TV personality for the last two decades. Dr. Oz clearly comes in with a huge built-in advantage.”

“John has had a remarkable recovery, but there’s never been a closed captions debate like this with one of the candidates dealing with auditory processing disorder. The captioning process may also lead to time delays and errors in the exchanges between the moderators and the candidates.”

Fetterman Used the Toolkit Too

The toolkit of talking points for social media has a phrase Fetterman used numerous times in the debate. “Remember the Oz Rule: When he’s on TV, he’s lying.” Fetterman used this catchphrase in answering the first question before Oz had spoken for the night.

When asked what qualified him to be a U.S. Senator, here is how Fetterman answered:

“Good night, everybody. I’m running to serve Pennsylvania. He’s running to use Pennsylvania. Here’s a man that spent more than $20 million of his own money to try to buy that seat. I’m also having to talk about something called the Oz rule, that if he’s on TV, he’s lying. He did that during his career on his TV show. He’s done that during his campaign, about lying, about our record here. And he’s also lying, probably, during this debate,” Fetterman said.

“And let’s also talk about the elephant in the room. I had a stroke. He’s never let me forget that. I might miss some words during this debate. Mush two words together. But it knocked me down, but I’m going to keep coming back up.”

Not All Questions Answered

Oz was also asked what qualified him to be a U.S. senator, but his answer was not direct.

“I’m running for U.S. Senate because Washington keeps getting it wrong with extreme positions. I’m going to bring stability, balance, all the things that you want to see because you’ve been telling it to me on the campaign trail. And by doing that we can bring us together in a way that has not been done of late. Democrats, Republicans talking to each other. John Fetterman takes everything to an extreme, and those extreme positions hurt us all,” Oz said.

He went on to talk about crime and Fetterman’s record of voting to release convicted murderers, in his role on the state parole board.

Many Americans are worried that they will never receive their full Social Security benefit or have to accept cuts to their benefits. The candidates were asked how they would ensure Social Security is there for future generations.

“We made a deal with the wonderful seniors of our nation. They worked their hearts out. They paid into a program. No one’s going to touch it on my watch except to make sure that it’s stronger than it is right now. Social Security and Medicare, which I know a lot about as a doctor, are the fundamental elements of security for our seniors and they deserve to feel that they’re valued by our nation,” Oz said, adding that Fetterman has been running ads and saying that Oz is against those programs.

“I’ve never said anything different than what I’m saying to you on the stage. But in an effort to fear monger with people who are older and can be taken advantage of, you’ll run these ads.”

Oz went on to say Fetterman has not shown up on the campaign trail for voters or the media and Oz had to beg him to debate.

Owens asked Oz for specific examples of how he would secure Social Security, but he did not ask Fetterman for specifics on this question.

“We have to make sure that it adequately increases with the higher inflation rates that we have,” Oz answered. “So we’ve got to make that 4 percent of wasted money, that right now is in the budget, redirected appropriately. One of the first places I would use it is Social Security and Medicare. Here’s the reason: one of the worst things we can do to people is give them bad quality care. If you have people who are not going to see a doctor because they can’t afford it, they’ll get sicker. Bad medicine means more cost.”

Fetterman was given a chance to rebut comments Oz made about him.

“I just can’t say one thing other than that Dr. Oz would support cutting Medicare,” Fetterman said.

“It’s absolutely a fact,” Fetterman said. Later Fetterman shouted out in the middle of Oz’s closing statement, “You want to cut Social Security!” He was reprimanded by a moderator.

Oz was asked if he is concerned about Donald Trump’s ongoing legal investigations. He said he had not been following it closely as he has been on the campaign trail, but he believes in the American legal system, although he believes Fetterman broke the law when he was mayor of Braddock and was never charged.

In 2013 Fetterman chased after an unarmed black man after hearing gunshots near his home.

“John Fetterman took a shotgun, chased an unarmed African American man, and put the gun, according to that man, to his chest,” Oz said.

“John, you were pulled over by the police. They let you go. You were the mayor at the time. Why haven’t you apologized to that unarmed innocent black man who you put a shotgun to his chest?”

Fetterman was given 30 seconds to explain.

“Maybe the opportunity to defend our community as the chief law enforcement officer there,” Fetterman said. “Everybody in Braddock, of an overwhelming majority community of black community, all understood what happened. You know, they understood what happened, and everybody agreed that, and nobody believes that it was anything about me making a split-second decision to defend our community as well.”

“Why not apologize?” Oz asked.

“Mr. Oz. Please. We are still with Mr. Fetterman,” moderator Sylvester said, and immediately changed the subject. “Turning to you right now. Do you support Biden running in 2024? Why in 60 seconds.

“It’s up to his choice whether he wins and if he does choose to run, I would absolutely support him,” Fetterman said. “But ultimately, that’s really only his choice,”

It was apparent Fetterman struggled to communicate at times with moments of silence as he collected his thought before answering. His answers did not always match the question.

Fetterman was asked about his ability to serve as a senator and asked if he would release his medical records. He declined to release the records.

“I believe if my doctor believes that I’m fit to serve, and that’s what I believe is appropriate,” Fetterman said.

Oz did not address Fetterman’s health.