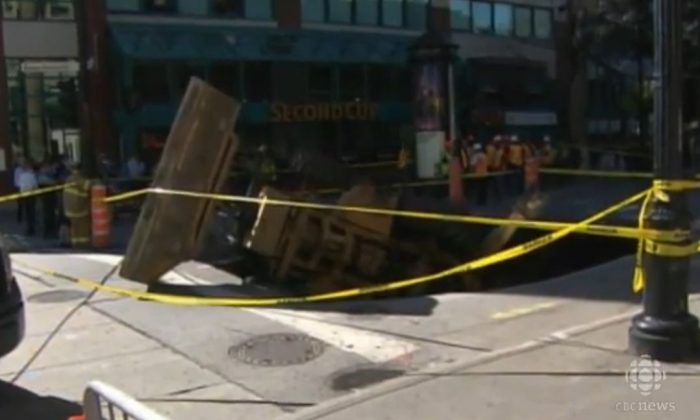 A screenshot of a CBC video shows the Montreal sinkhole.
News

A sinkhole in Montreal swallowed up a backhoe, according to reports on Monday, said reports. The sinkhole opened in the city’s downtown section on Ste. Catherine St. near the corner of Guy St.

City workers were responding to a water main leak downtown when the hole opened up.

The driver of the backhoe was lightly injured but was taken to the hospital as a precaution.

Police cordoned off the area and later expanded it out of fears that the sinkhole might expand.

The backhoe was in place in the morning to start digging when it fell into the sinkhole.

“All of a sudden we saw from far that the whole street just caved in, and we could see the top of the tractor,” witness Christine Komorowski told CTV News. “It was unbelievable.”

City officials said that the water leak may have caused the sinkhole but more investigating is needed to determine the cause.

The street was already closed for construction and no one was close enough to get hurt.

“We think that the water leak was because of the sewer pipe,” Emilie Miskdjian, a local municipal spokeswoman, told the National Post. “It’s a broken sewer pipe. That’s what we think but we have to do inspections to see what is really the cause.”

Fraser Butler, who was parking his car nearby,saw the driver of the backhoe emerge from the sinkhole.

“I was scared. This is not the first time we get sinkholes like this in Montreal. Is it safe?” he told the CBC.