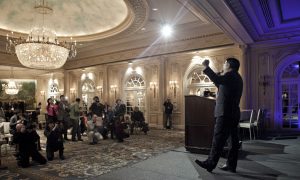 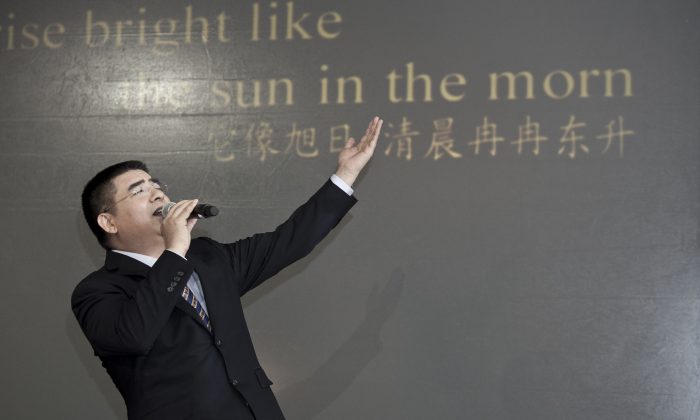 Chen Guangbiao sings karaoke at a press conference he called for the morning of Jan. 7, 2014, in a hotel in New York City. Lyrics to the song he is singing, in Chinese and English, were projected onto the wall behind him. (Samira Bouaou/Epoch Times)
China

“The tradition and style of The New York Times make it very difficult to have objective coverage of China. If we could purchase it, its tone might turn around,” he wrote in an opinion article in a Chinese Communist Party-controlled newspaper.

But after whipping up all that publicity, the agenda seemed to rapidly shift once he arrived. On Jan. 7, Chen held a press conference in the Grand Ballroom of the JW Marriott Essex House hotel, announcing that he would be footing the bill for medical expenses for two Chinese burn victims.

They were said to be participants in an alleged self-immolation incident that took place in China 13 years ago. After singing karaoke-style one of his own compositions, and denouncing Japan, he brought out two badly disfigured women and stood between them as though they were puppets. Bamboozled observers were left to puzzle over why.

The two women were allegedly part of a group of five (a number that was later revised to seven) participants in a self-immolation incident on Tiananmen Square, in the heart of Beijing, on Jan. 23, 2001.

Immediately after the incident, the Chinese Communist Party, through its media channels, declared them to be practitioners of Falun Gong, a traditional spiritual practice that has been persecuted in China since 1999.

There were TV cameras at the scene to record close-ups as the police quickly extinguished the flames. According to analysts, the presence of both the cameras and the fire extinguishers revealed careful advance planning by the authorities.

A range of inconsistencies in the footage and official propaganda were explored by the award-winning film “False Fire,” produced by New Tang Dynasty Television.

Later that year the United Nations-affiliated NGO International Educational Development told the U.N.: “Our investigation showed that it was actually the CCP authorities who staged the self-immolation and destroyed those lives.” The group said it was a hoax to “frame Falun Gong.”

“We acquired a self-immolation analysis video, which clearly showed that the CCP regime directed and staged the entire incident,” International Education Development said.

In a statement soon after the event, Falun Gong spokesman Erping Zhang said that Falun Gong’s teachings “explicitly prohibit killing and suicide.” Zhang pointed out that the participants had not even used correct Falun Gong hand postures. “Could these people be genuine Falun Gong practitioners if they are not following such a basic aspect of the teachings or correctly performing the meditation exercises?” he asked.

Washington Post reporter Philip Pan traveled to the city that two of the immolators were said to hail from, and found that, in the case of one woman, no one had ever seen her practice Falun Gong. The National Review dismissed the regime’s claims about the immolations as “more lies from Beijing.”

By 2001 the campaign to crush Falun Gong had been going on for two years. It was a political priority for the Party under then-leader Jiang Zemin, but despite the regime’s best efforts, the campaign was not getting very much public traction.

Then came the alleged immolation, on a major holiday. Rong Yi, coordinator of the New York Falun Dafa Association, said that incident in 2001 started the most brutal period of persecution. “This self-immolation incident became the centerpiece of the hate propaganda against Falun Gong, and was directly used to justify the persecution.”

Though there were many holes in the official story, and it was discredited by a range of groups outside China, inside China the Party controls the airwaves.

Amid all this, the question remains as to why Chen Guangbiao was holding the press conference in New York.

In an interview with the Chinese-language Phoenix television while at the airport, Chen said that there were three things he wanted to do in New York, and that two of them would be more important than his bid for The New York Times.

He said one was “absolutely going to shock the world,” and it would take place during a press conference Tuesday—the day he brought out the burn victims.

The two alleged victims of the incident were said to be a mother and daughter.

Given the Chinese regime’s careful control of this story, it is impossible to independently verify that those two individuals were actually among those who participated in the event 13 years ago. The Party also changed the number of victims from five to seven shortly after it took place in 2001.

Chen Guangbiao has a history of unusual public relation stunts, frequently with strong political overtones. He often tries to bring to sensitive issues a light and mocking air that helps prop up the image of the Chinese Communist Party (CCP).

During China’s anti-Japanese riots in 2012, he bought 43 Chinese-made cars for people whose Japanese cars were smashed. During the press conference, he dressed in a lime-green suit and danced on the car roofs, carrying a bicycle in one hand, while people waved CCP flags behind him.

In 2013, when news of China’s toxic smog was tarnishing the image of the ruling regime, Chen began selling cans of air with his face on them, and with politically flavored names like “post-industrial Taiwan.”

The Tuesday press conference at the JW Marriot Essex House hotel followed a similar line, with a good deal of pro-Party messaging.

Chen began the event by singing karaoke. He said he wrote the song himself, which he called “My Chinese Dream.” The term, “Chinese Dream,” is drawn from a recent slogan used by the Party to promote its rule.