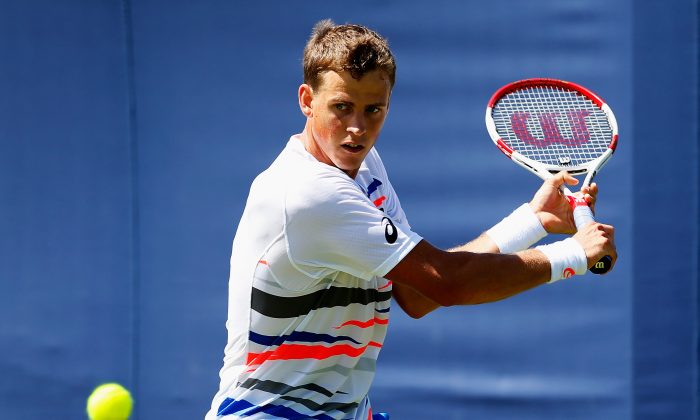 Vasek Pospisil prepares for a backhand at the Aegon Championships at Queens Club in London, England on June 10. (Harry Engels/Getty Images)
Canadian Content

Singles is the Priority for Pospisil Despite Doubles Heroics

Canadian tennis star Vasek Pospisil has had time to reflect on his doubles triumph at Wimbledon and sees his singles game as the beneficiary.

Pospisil, 24, is currently ranked 34th in singles. He reached a career-high ranking of 25 earlier this year.

Pospisil, from the province of British Columbia, and American partner Jack Sock became only the third team to win a grand slam doubles title in their first tournament together. They beat the legendary top-seeded Bryan brothers in a five-set thriller on July 5.

In fact, Pospisil and doubles heroics over the past year-and-a-half seem to go hand-in-hand.

In last year’s Davis Cup semifinal run, partnering veteran Daniel Nestor, they played three five-setters, winning two of them. The scores in the fifth set for the ones they won were 15–13 against Italy and 10–8 against Serbia.

“I enjoy playing doubles. I think playing doubles at the right time can really help my singles game,” said Pospisil in an email interview with Epoch Times.

“It’s great for working on certain shots and finishing points at the net, which is something I am trying to do more in my singles game. And if you have some good results in doubles it can give you added confidence on the singles court.”

“The priority is singles, of course, but I will play doubles here and there when the timing is right.”

Canadians to the Fore

Pospisil, the son of Czech immigrants, spoke about the incredible recent success in Canadian tennis.

“I think you will find that there isn’t one specific path that players have taken to break into the top 50, the main thing is hard work and believing that you can be successful chasing your dreams,” Pospisil said.

“I think the fact we have several players ranked so high now is a combination of coincidence and federation support.”

His father Milos gets a lot of credit for his development.

“From my side, my dad has been the biggest influence in my career as he was my coach for most of my life. My current coach [Frederic Fontang] has done an exceptional job with me and I have improved a lot under his guidance these past 18 months.”

Pospisil’s singles ranking in the last 18 months has improved by about 100 places.

And, not surprisingly, Pospisil’s idol growing up was none other than Roger Federer.

“I have a tremendous amount of respect for Roger and what he has accomplished. With that being said, suddenly I find myself in the same draws as him so now he is ‘competition’,” Pospisil said.

Pospisil lost both meetings with Federer including one in Montreal three years ago. Their most recent meeting was a tough three-setter in Federer’s native country of Switzerland last year.

National Bank in partnership with Tennis Canada recently added Pospisil as a new ambassador for their “On the Ball” program.

The On the Ball program recycles used tennis balls by placing them on the legs of students’ chairs to eliminate screeching noises when the chairs are dragged across the floor. This promotes a quieter environment for students and facilitates learning.

“It really is an awesome idea to have used tennis balls on the legs of chairs to reduce the noise. I wish we had that in my school when I was growing up,” Pospisil said.

According to a National Bank press release, 185,000 tennis balls were collected for nearly 150 schools in Quebec and Ontario in 2013.

But going forward, Pospisil’s focus is his singles game. He said it’s hard to set specific ranking and tournament results objectives as he’s still improving many aspects of his game.

“If I continue to work hard, the results and ranking will follow. You never know how far hard work can take you, you just have to do it and find out.”