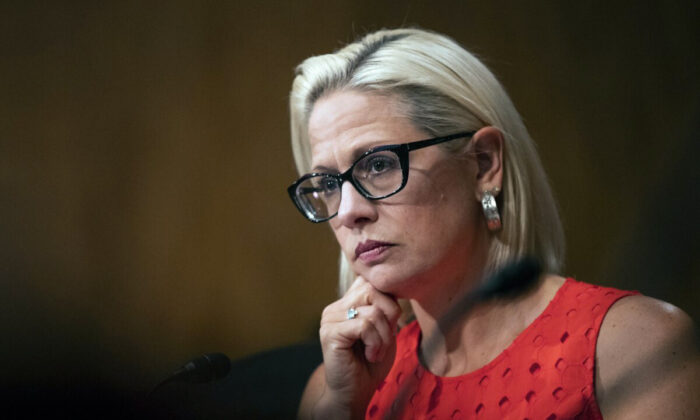 Sen. Kyrsten Sinema (D-Ariz.) has reached a deal with Democrats over a multi-pronged spending package that lawmakers say would reform the tax code, lower the federal deficit, lower health care costs, and invest in energy and climate change programs.

The spending package appeared to be a revised, alternate version to the Build Back Better (BBB) bill, which would fulfill a major agenda of President Joe Biden.

Sen. Joe Manchin (D-W.Va.) previously announced on July 27 that he had reached a deal with Senate Majority Leader Chuck Schumer (D-N.Y.) on energy, taxes, and health care to advance the bill, which is dubbed the “Inflation Reduction Act of 2022.”

Sinema, who previously held out on the deal, said in an announcement on Thursday she would support moving forward with the measure and begin debate on the bill.

Sinema was referring to a provision that would have closed the so-called carried interest loophole and generate an estimated $14 billion in new revenue over the next 10 years. The loophole is said to help wealthy private equity and hedge fund managers pay less taxes.

She was also separately referring to an agreement to protect manufacturing from the impact of a proposed 15 percent corporate minimum tax, which opponents say would jeopardize economic growth.

“Following this effort, I look forward to working with [Sen. Mark Warner (D-Va.)] to enact carried interest tax reforms, protecting investments in America’s economy and encouraging continued growth while closing the most egregious loopholes that some abuse to avoid paying taxes,” the Arizona senator said, referring to tax concerns that affect hedge funds.

Schumer said in a statement on Thursday that the agreement “preserves the major components” of the original bill, which includes “reducing prescription drug costs, fighting climate change, closing tax loopholes exploited by big corporations and the wealthy, and reducing the deficit by $300 billion.”

“I am pleased to report that we have reached an agreement on the Inflation Reduction Act that I believe will receive the support of the entire Senate Democratic conference,” he also said. “I have had many productive discussions with members of our conference over the past three days and we have addressed a number of important issues they have raised.”

Schumer said the final version of the bill will be introduced on Saturday.

The Democratic leader seeks to pass the measure through a procedural tool called “reconciliation” that allows a bill related to taxes, spending, and debt to be passed in the chamber by a simple majority rather than having to pass the 60 vote filibuster threshold. The reconciliation process also limits debate on the bill to 20 hours. That could allow the bill to be passed with only Democratic votes, if necessary, if every Democrat is on board.

The bill is expected to include about $370 billion on energy and climate programs and $64 billion to extend subsidies for Affordable Care Act premiums for three years through 2025.

It also seeks generate about $700 billion in new revenue over the next 10 years, which would leave roughly $300 billion in deficit reduction.

A large portion of the $700 billion—an estimated $313 billion—is expected to be generated by increasing the corporate minimum tax to 15 percent, while the remaining amounts include $288 billion in prescription drug pricing reform and $124 billion in Internal Revenue Service tax enforcement.

Support of All 50 Democrats in Senate

Sinema’s announcement means all 50 Democrats in the 50–50 split Senate will support the measure. Democrats hold a majority due to Vice President Kamala Harris’s tie-breaking vote.

Biden said in a statement from the White House released late Thursday that “we’ve taken another critical step toward reducing inflation and the cost of living for America’s families,” adding, “I look forward to the Senate taking up this legislation and passing it as soon as possible.”

In a Twitter post on Thursday afternoon, Schumer said the legislation “will be the largest package to fight the climate crisis ever passed by Congress.”

“Even the Democrats’ favorite estimate says their so-called inflation bill will take nine years to cut the same amount of inflation that our country added every week in June,” he wrote on Twitter on Aug. 3. “Nine years of huge tax hikes and big spending to remove literally one week’s worth of inflation. A joke.”

“Democrats want to raise families’ electricity, gas, and heating bills so they can send rich people rebates for buying $80,000 electric cars. New taxes on American oil and gas,” he said in another Twitter post. “Costly virtue signaling with no meaningful emissions impact as China keeps emitting more and more.”