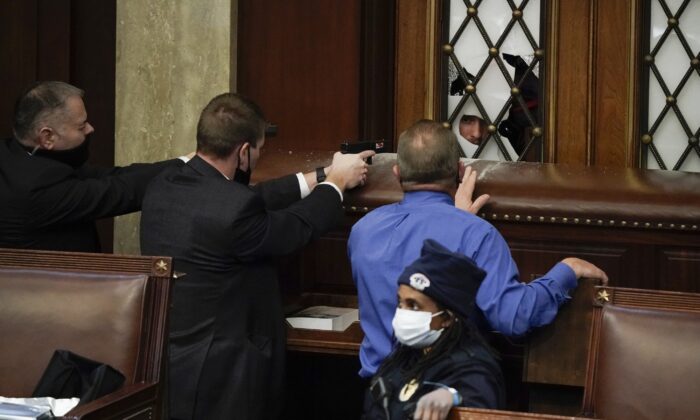 Police with guns drawn watch as protesters try to break into the House Chamber at the U.S. Capitol in Washington on Jan. 6, 2021. (J. Scott Applewhite/AP Photo)
Electoral Vote Count

Person Shot Inside US Capitol Has Died: Police

Update: The woman was identified as Ashley Babbitt, also slept Ashli Babbitt. The shooter was a U.S. capitol Police officer who was suspended, pending an investigation.

The woman who was shot inside the U.S. Capitol on Wednesday has died, the Metropolitan Police Department said.

A police spokesman told news outlets that the woman died, but declined to provide more details on her identity or what happened.

The U.S. Capitol police didn’t return a request for information.

Speaking to reporters in a press conference earlier in the day, Washington Police Chief Robert Contee III confirmed one person was shot but said other details weren’t immediately available.

“That incident is under investigation and we don’t have anything else to provide at this time,” Washington Mayor Muriel Bowser, a Democrat, added.

Video footage showed gunshots being fired after protesters entered the Capitol on Wednesday afternoon, interrupting a joint session of Congress. In one clip, a shot is heard ringing out as a woman is climbing into the Speaker’s Lobby just outside the House chamber. Another video showed the aftermath of the shooting.

“We had stormed into the chambers inside, and there was a young lady who rushed through the windows. A number of police and Secret Service were saying ‘get back, get down, get out of the way,'” a witness told WUSA.

“She didn’t heed the call and as we kind of raced up to grab people, and pull them back, they shot her in the neck.”

Police officers rushed in wearing riot gear and escorted others who were part of the group out of the building, the man said. He was standing outside the Capitol during the interview.

A huge crowd had gathered outside the building as both chambers of Congress convened to count electoral votes. An early objection to Arizona’s votes triggered a two-hour debate, which was going to be followed by a vote.

Over 100 GOP legislators planned to file objections to votes from at least six states, alleging irregularities and, in some cases, fraud.

Unless the objections are upheld—considered unlikely in the face of united Democratic opposition, with some Republicans siding with them—Democratic presidential nominee Joe Biden was expected to be certified the winner over President Donald Trump.

But the session, already expected to drag on until late Wednesday or even into Thursday, was derailed as protesters stormed the Capitol.

Police were seen arresting a number of people, but the bulk appeared to be free to roam corridors and other areas, until reinforcements arrived.

Trump and congressional leaders urged people to exit the building and return home.