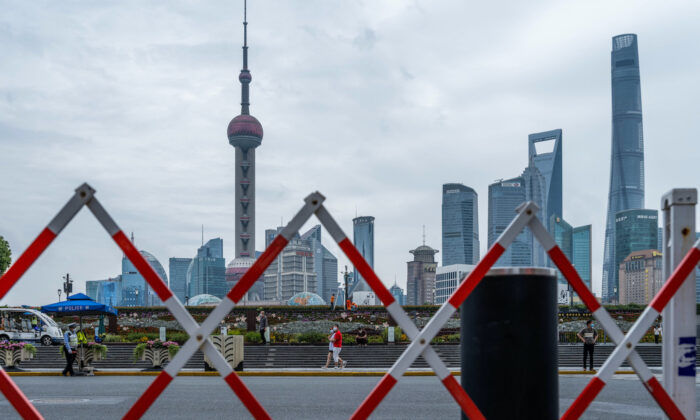 Pedestrians walk on the Bund, opposite Lujiazui Financial Center in Shanghai on June 10, 2022, amid preparations for city wide COVID-19 testing. (Liu Jin/AFP via Getty Images)
INSIDE CHINA

Shanghai’s Lujiazui financial district, known as China’s “Wall Street,” has paid a high price under the Chinese Communist Party’s strict zero-COVID policy. More than a third of the district’s shops have been closed, according to a financial service firm’s analysis.

A 5 percent level is when the malls’ overall operations would be affected, according to the research firm.

Also according to the CRIC’s research on Shanghai commercial real estate, Shimao International Plaza in Huangpu District has a 22.4 percent vacancy, while there is an average of 9 percent vacancy across 20 major malls in Shanghai.

Shanghai authorities negated the claims through its mouthpiece media claiming that the report was “exaggerating,” with an “out of context” conclusion.

State media, Shanghai Observer, refuted the analysis on Sept. 10. It argued that the vacancy rate of shopping malls should be calculated in terms of the vacant areas, not the number of vacant stores.

In another study, CAIC monitored nine major metropolitans across China.

In the first half of 2022, the analysis showed a general decline of 10 to 30 percent in customer volume in malls. The average vacancy rate in the second quarter of 2022 was 6.6 percent; with Wuhan being the highest at 9.3 percent, and Shanghai already at 7.2 percent.

A local employee at the Super Brand Mall in Lujiazui on Aug. 29 described via social media the mall’s situation.

“It’s been almost three months since Shanghai lifted the lockdown, but there are no signs of recovery in the mall,” the person said.

The social media post said that 15 of a total of 53 stores on the mall’s third floor were closed and that another entire floor was filled with only closed shops.

“I got depressed every time I visited the place … Is this a war?” the post asked.

On Sept. 6, Shanghai called off the Lujiazui Forum, the city’s most important financial forum, a day before it was to be held due to  COVID flare-ups in other cities such as Shenzhen and Chengdu.

The forum, traditionally scheduled in June, was previously delayed by Shanghai’s two-month long lockdown over COVID-19 outbreaks earlier this year.

But according to local officials, the forum is again delayed due to the need to “deepen the (event’s) topics,” Reuter reported.

In June, experts warned that Party leader, Xi Jinping, won’t yield over zero-COVID pressures, according to a Foreign Policy article by Eyck Freymann, the director of Indo-Pacific at Greenmantle, and Yanzhong Huang, a senior fellow for global health at the Council on Foreign Relations.

According to the article, Chinese officials who oppose the zero-COVID policy are gambling that public pressure and economic reality will induce Xi to change his mind.

But “As Xi once put it: ‘The greater the pressure, the more strong-willed I become,’” the article said.

Gregory Copley, the president of the International Strategic Studies Association based in Washington, also explained the motives of the strict lockdowns in his article titled, “Shanghai as a Front Line in China’s New Civil War.”

“The overwhelming use of the COVID ‘threat’ to the population has enabled the Party to disguise the suppression of the private sector and all opponents of Xi,” he wrote.

Lin Yan contributed to this report.