Shoplifting in California Is out of Control Due to Zero Consequences: District Attorney 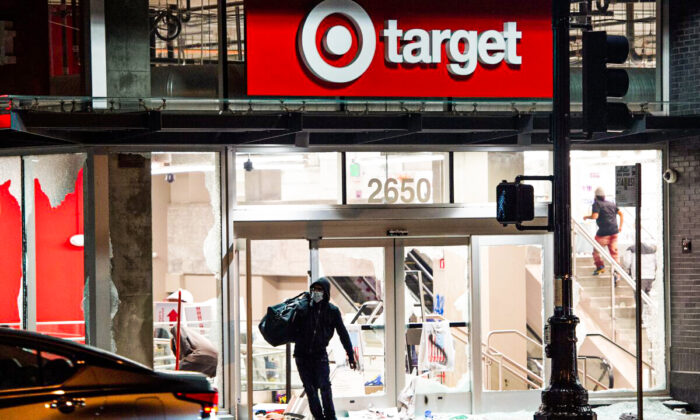 A looter robs a Target store in Oakland, Calif., on May 30, 2020. (Josh Edelson/AFP via Getty Images)
By Jamie Joseph

Jamie Joseph
Jamie is a California-based reporter covering issues in Los Angeles and state policies for The Epoch Times. In her free time, she enjoys reading nonfiction and thrillers, going to the beach, studying Christian theology, and writing poetry. You can always find Jamie writing breaking news with a cup of tea in hand.
View profile
and Siyamak Khorrami

Shoplifting in California is getting out of control because of recent criminal justice reform laws, a district attorney told EpochTV’s “California Insider.”

District Attorney of El Dorado County Vern Pierson said that while property crimes, including shoplifting, are illegal, state laws such as Proposition 47 and Proposition 57 allow many criminal activities to go undeterred.

Passed by voters in 2014, Prop. 47 downgraded certain thefts and drug offenses from felonies to misdemeanors. Its most well-known statute raised the minimum amount of stolen goods from $400 to $950 for a theft case to be classified as a felony, which critics consider to be the main cause of a rise in petty theft across the state.

It also allows felons currently serving prison terms to petition for resentencing under the new classifications. Those who have already served their terms can also have their past convictions reclassified as misdemeanors.

“The practical reality is that most retailers have learned if they call law enforcement for a theft of less than $950, either law enforcement will not respond, or if they respond at most, what they will do is issue a citation [for court appearance],” Pierson said.

He noted that most theft suspects don’t show up in court, for which there are little or no consequences.

As such, most retailers in California have a policy that prevents their employees from reporting low-level property crimes, which is why the data for such incidents may be inaccurate, according to Pierson. Some stores stop reporting petty theft altogether because police “can’t do much.”

A store can be sued by an attempted robbery suspect who’s physically confronted by its employees.

“We’re a very litigious society here in California, and the stores and their insurance carriers really are afraid of being sued for trying to stop a crime that has little or no consequence,” he said.

Prop. 57, passed in 2016, allows certain criminals who are classified as “non-violent” to be released early. It also prohibits prosecutors from charging juveniles as adults without a judge’s approval and those who were tried as adults for crimes committed when they were juveniles to appeal their sentences.

As an emergency measure to reduce the jail population during the COVID-19 pandemic, the Judicial Council of California in April 2020 removed cash bail for some defendants. Although the statewide zero-bail order expired in June, courts still have to consider each defendant’s ability to pay while setting bail amounts, following a California Supreme Court ruling in March 2021.

The Public Policy Institute of California, a nonpartisan research group, reported upticks in the number of property and violent crimes last year in four of the state’s largest cities—Los Angeles, Oakland, San Diego, and San Francisco.

An analysis by the group also found “some evidence” that Prop. 47 affected property crime, as personal property thefts grew by 9 percent from 2014 to 2016, with thefts from motor vehicles accounting for about three-quarters of this growth.

“We have this increased lawlessness that comes from [the perception that] ‘I can take other people’s property because nothing will happen to me,’” Pierson said.

He noted that data generated by car insurance companies will be able to show a more accurate picture of property crimes statewide since they require individuals to file a police report when making a claim.

“What we’ve seen in the last six or seven years is … auto burglaries and auto thefts are up dramatically,” Pierson said. “And that’s a truer set of data for where crime actually is in California.”