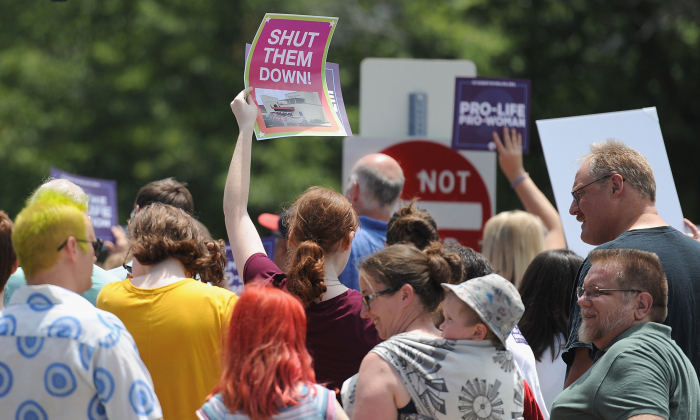 A group of demonstrators display signs during a pro-life rally outside the Planned Parenthood Reproductive Health Center in St Louis, Mo., on June 4, 2019. (Michael B. Thomas/Getty Images)
By Steven Kovac

“I shot somebody. It was an accident,” said a 74-year-old Michigan homeowner in a Sept. 27 video interview with TV-8 News of Grand Rapids.

The Odessa Township man admitted to shooting an 84-year-old pro-life volunteer who was knocking on doors in her community trying to persuade people to vote “No” on a proposed amendment to the Michigan constitution that would make abortion on demand a right.

The shooting occurred on Sept. 20 during daylight hours.

TV-8 reported earlier that law enforcement sources described the prelude to the shooting as “an alleged verbal altercation while she [the volunteer canvasser] passed out pamphlets.”

The man said in the Sept. 27 interview that he was in his barn when he heard his wife arguing loudly with a visitor who had come to the door of the house.

He said he grabbed his wife’s .22-caliber rifle and fired a “warning shot” into a pine tree in front of the farmhouse.

He then joined the two women.

In the interview, the man alleged that the elderly female visitor was “ranting and raving” and waving a clipboard around.

“I’m thinking she’s going to smack [my wife] with it. So, without thinking, I went to club it away with the rifle and my finger was still on the trigger guard.”

He said the gun went off accidentally and a round struck the volunteer in the right shoulder.

The man told TV-8 that he knew he could be facing charges.

As of press time, the police report isn’t yet completed, and no charges have been filed.

Right to Life communications director Anna Visser told The Epoch Times on Sept. 26, “No one deserves to be shot for their beliefs, whatever they may be.”

“The idea that shooting this woman is at all excusable is a dangerous claim for Americans across the country who engage in peaceful door-to-door canvassing.

“No one should fear violence while peacefully exercising their constitutionally protected right to free speech.”

In a Sept. 24 statement, Michigan Right to Life said the wounded woman wants to remain anonymous pending the completion of an investigation by the Michigan State Police.

Right to Life described the interaction between the volunteer and the elderly female homeowner as a “heated conversation.”

It said the unarmed volunteer was peacefully leaving when she was shot in the back.

According to a Sept. 27 Right to Life press release, the victim told authorities she was “dazed” by the shot and feared she would be shot again.

A single bullet passed through the flesh of her shoulder and entered her back.

The wounded woman then drove herself to the Lake Odessa Police Station to report the attack.

From there, she was transported to the hospital for treatment and was later released.

The elderly female homeowner told TV-8 that the woman knocked on her door and said she was visiting as part of “a coalition to save women and babies [and] she needed me to vote ‘No’ on Proposal 3.”

When the female homeowner replied that she couldn’t do that and asked her to leave, “the argument was on,” she said.

According to the female homeowner, as their voices got louder and louder, what she describes as a “warning shot” rang out from the barn.

She made no reference to the shot that wounded the volunteer.

As the shooting incident illustrates, passions on both sides are running high over Proposal 3.

The ACLU of Michigan, a strong backer of the proposition, stated on its website that the new constitutional amendment would ensure that safe medical care and a “broad range of reproductive health care, including abortion” is accessible.

“This proposal will affirm that every Michigander has the fundamental right to reproductive freedom, which involves the right to make and carry out decisions without political interference.”

The exact language of the proposed constitutional amendment reads, “Every individual has a fundamental right to reproductive freedom.”

Moffett expressed his concerns in a recent phone interview with The Epoch Times, saying: “The amendment says, ‘every individual.’ It does not say ‘every adult and every minor with permission.’

“It also includes ‘sterilization’ among the fundamental reproductive rights. We think they worded it that way to get the LGBT folks on board.”

David Kallman, chief legal counsel for the Great Lakes Justice Center, told The Epoch Times that, in his opinion, the language of Proposal 3 was carefully crafted to undermine the legal rationale for every Michigan law that restricts, regulates, and limits matters pertaining to sexuality.

The language reads, “A state interest [in regulating such matters] is ‘compelling’ only if it is for the limited purpose of protecting the health of an individual seeking care … and does not infringe on the individual’s autonomous decision making.”

“In other words, ‘Do your own thing. Anything goes,'” Kallman said.

“The language of the proposed amendment lays the groundwork for future lawsuits brought by individuals and liberal organizations to strike down every socially beneficial statutory restriction currently on the books as unconstitutional.

“The courts will inevitably expand the definition of what sexual practices and other conduct will be protected by this new ‘right,'” Kallman said.

Alan Cropsey, a former Republican state legislator and grandfather of 16, told The Epoch Times: “Proposal 3 puts women supporting abortion in an awful position. By voting for the proposal to ‘preserve the right to an abortion,’ they may end up losing their rights over their own children.”